Ancelotti, Moyes, Sean Dyche And Mancini Among The Names To Replace Koeman At Everton 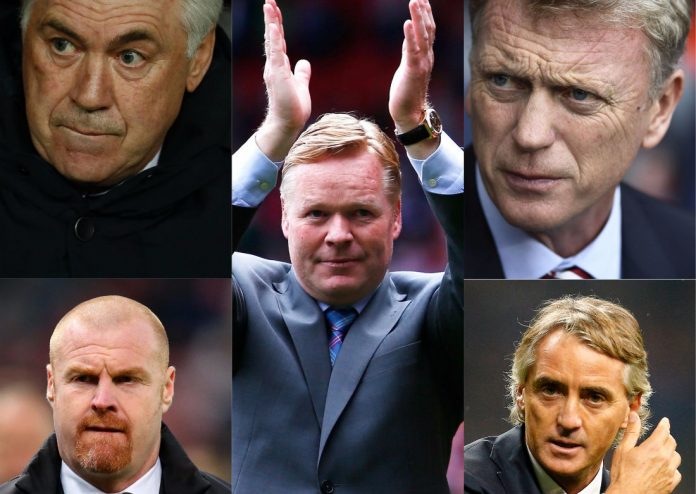 Carlo Ancelotti, David Moyes, Sean Dyche and Roberto Mancini are all in Everton’s radar, as the club is looking for managers to fill the void made by Koeman’s departure.

Everton confirmed Ronald Koeman has been relieved form his services by chairman Bill Kenwright, which leaves the door for managers to take charge of the Toffees.

The Merseyside Club sacked Koeman on Monday afternoon after the club were hammered by Arsenal 5-2 at Goodison Park on Sunday.

Burnley boss Sean Dyche tops the current list of favourites to sign for the club. Dyche is ready to face new challenges as the Englishman has lead Burnley to promotion and then kept them in the Premier League last season.

David Moyes managed Everton for 11 years before joining Manchester United, although the Toffees didn’t won any silverware under his spell but he made them a regular feature in the top few places of the English Premier League. Moyes could make a comeback as he is the one who knows the club better than anyone.

Carlo Ancelotti was sacked by Bayern after the club was humiliated by PSG in the UEFA Champions League. Everton could sign Ancelotti as the 62-year-old has a lot of experience in managing and he’s won the Premier League in 2009-10 with Chelsea.

The Italian has some good memories in Premier League, Mancini won Manchester City their first title in 44 years. Mancini is well known for his tactics which succeeded in Premier League. The 52-year-old is currently in charge of Zenit but could snub them for a return to the Premier League.

According to reports David Unsworth is set to take temporary charge of Everton after Koeman’s exit.

Everton spent £150million in the summer under manager Koeman , but the side are facing nightmares as they’ve won only two games out of their first nine games this season, landing them in the relegation zone.

In an official statement, the Toffees said: “Everton Football Club can confirm that Ronald Koeman has left the Club.

“Chairman Bill Kenwright, the Board of Directors and Major Shareholder Farhad Moshiri would all like to express their gratitude to Ronald for the service he has given to the Club over the past 16 months and for guiding the Club to seventh place in last season’s Premier League campaign.”