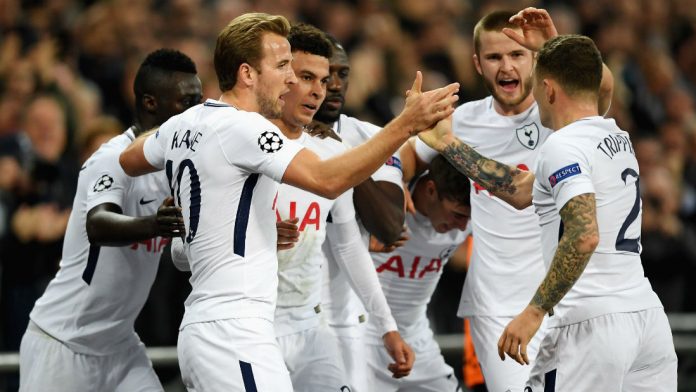 Wembley stadium has given the world some beautiful memories, another addition came on  Wednesday night where Tottenham Hotspur stunned the world by beating back-to-back UEFA Champions League winners Real Madrid.

The match ended 3-1 in favor of the home side. Cristiano Ronaldo was on the scoresheet as usual but it came in the last 10 mins of the match. Tottenham stars Christian Ereiksen and Dele Alli both were on the scoresheet to give football fans a night to remember.

The match started with both teams on their toes to open the score, it was a purest form of attacking football.

But it was Dele Alli who opened the score for the home side – making Real look like old men out there.

Harry Winks has mastered his vision to find players, the 21-year-old was the key behind Dele’s goal, the architect behind the move that gave them the lead in the first half.

Winks found Kieran Trippier at the right time, Tripper then drilled a faded pass that landed at the feet of Dele Alli, who made no error inside the six yard box to beat Casillas from close range.

The home of football was full of noise, it was extraordinary, it was mesmerizing with Tottenham fans singing out the tunes to honour their goalscorer.

The Dele song – he cost five mil, he’s better than Ozil – so loud that the Arsenal man must have heard it over in Hampstead.

Dele Alli wore the Champions League shirt for Spurs after serving a three game suspension, who exceptionally outshined any other player to claim the man of the match award.

He scored twice and then played a part in the making of the move that lead to Christian Eriksen’s goal, which sealed the night for the north london side.

This is how to play the game, Tottenham responded very well after they lost to Mourinho’s men.

Harry Kane was back in the line-up and certainly made a difference, the striker left Sergio Ramos chewing the grass every time Spurs went forward.

Ramos, ranked among the finest defenders in the world, is well know for his unforgettable injury time goals, but will surely want to forget those 90 minutes.

Real Madrid were supposed to come alive in this competition, but it seemed like Zidane and his men caught cold.

Recently crowned world player of the year again at a glitzy Fifa bash, Cristiano Ronaldo was isolated and frustrated, thanks to Tottenham’s high pressing he wasn’t really able to cause much problems.

The only area where Ronaldo outshined any other player was the record for the number of step-overs he pulled off, without actually doing anything.

Captain Jan Vertonghen’s made a first half recovery tackle on this show-pony, wrapping a boot around the Real Madrid forward to stop him from causing trouble.

Spurs simply had the upper hand in every area of the pitch.

Tottenham were back on the scoresheet again, when Dele scored their second when his effort deflected off Sergio Ramos after 56 minutes.

Real were had many players forward, allowing Spurs to slice them open in the move that led to the third.

Dele swivelled in his own half, sent his pass out to Kane and Eriksen arrived out on the left to drill a third beyond Casilla.

The only disappointment for Tottenham would be that they allowed Ronaldo to score a consolation goal for Real in the final minutes of the game.

Things could have gone more bad for Spurs but thanks to their show stopper Hugo Lloris, who expertly saved another flyer by Ronaldo in the dying minutes of the game.