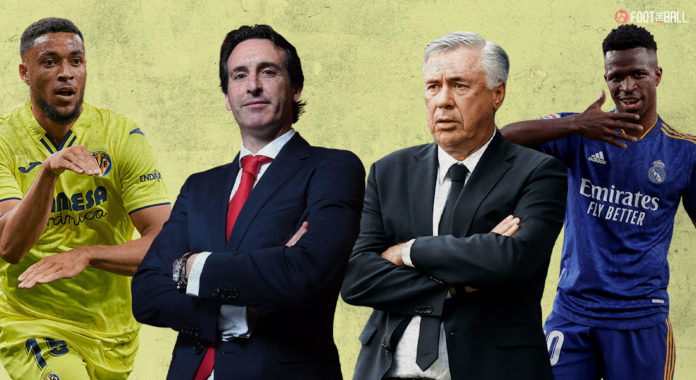 The Yellow Submarine have been in patchy form of late, taking just two wins from their last five matches across all competitions. That run started with an embarrassing 2-1 defeat to second-division Sporting Gijon in the Copa del Rey round-of-32.

With Atletico Madrid dropping points against Barcelona, the home side know that a win will take them into 4th-place at least for now. They strengthened in the winter transfer window by signing Giovani Lo Celso, and the Argentine midfielder will be adding more creativity to a side that has lacked quality to stutter on ever since winning the Europa League.

Los Blancos have had their own issues to deal with, but given the healthy points gap they had already built to start the season, dislodging them looks a tough task. Last weekend’s 1-0 win over Granada would have healed some of the wounds from a disappointing defeat in the Copa del Rey to Athletic Bilbao.

They have the strongest squad in the league by some distance, and even their veteran players are still capable of putting on a show every time they step onto the pitch. A crucial win away from home would see them go nine points clear of second-placed Sevilla, and keep the pressure on the chasing pack behind them.

Top scorer Gerard Moreno is out for Unai Emery’s side, while Francis Coquelin and Ruben Pena remain the long-term absentees.

Karim Benzema’s fitness is an area of real concern for Carlo Ancelotti, with PSG looming on the horizon. The Frenchman may start though is not said to be at 100% yet. Ferland Mendy’s recovery from injury is going well to make the bench.

The return of Arnaut Danjuma will be a welcome boost for Villarreal, especially with Moreno out. He has five goals and two assists, but his underlying numbers suggest a player with dynamic potential and ability to influence games single handedly. 6.38 progressive carries P90 show how often he brings the ball upfield during attacks with 8.39 touches in the opponent’s penalty area P90.

Danjuma is always involved in attacks, given his significant speed, defenders are wary of fouling him. As he likes to operate from the left mostly, Dani Carvajal and Eder Militao will be his most common adversaries. Danjuma knows that if he can take up decent positions and get his shots away quickly, Villarreal can score.

Vinicius Jr. missed the last match through suspension and his addition will be good for Madrid, given Benzema’s iffy status. The fleet-footed attacker has developed into one of the world’s best for one-on-one situations and is enjoying a breakout season.

▪️ Vinicius in the first half of this season: 15 goals ⚽️ pic.twitter.com/p5khpK7SLQ

12 goals and five assists in La Liga have catapulted him as one of the sharpest scorers with Benzema providing superb support alongside. Vincius will be likely targeting Raul Albiol, with the defender’s lack of speed while Juan Foyth is also forward venturing, meaning spaces will be there to exploit for Madrid. If he can set up some chances or even win fouls, the goals can come quickly for the away side.

Madrid are the overwhelming favourites, as they have been for most of their games this season. Despite being the visitors, Villarreal will be wary of Madrid, and need to really put in a special performance to win. FootTheBall predicts a 2-0 win for Los Blancos