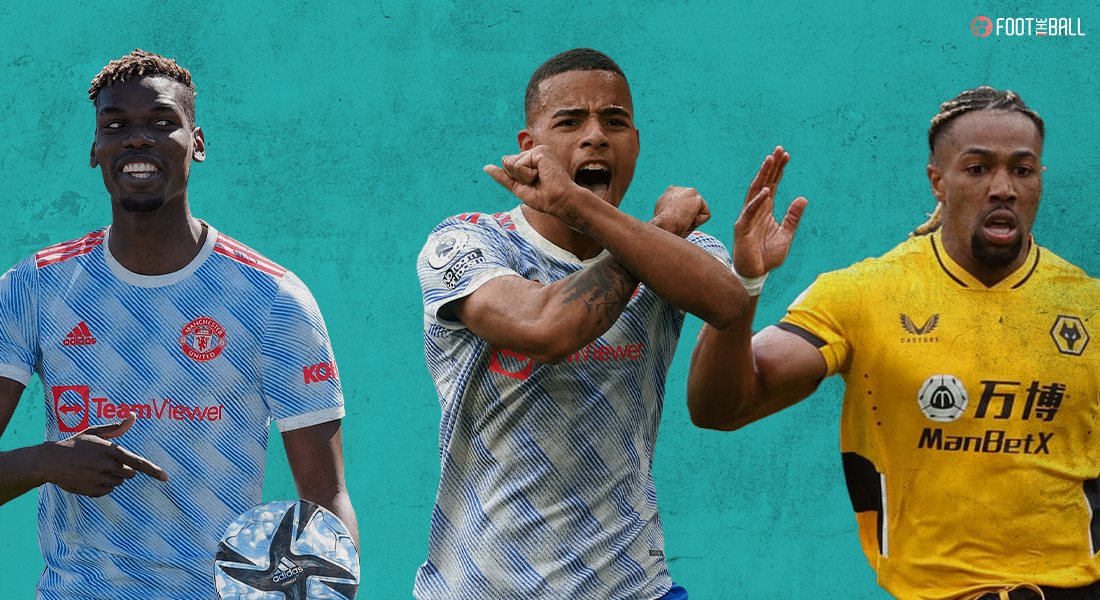 Wolves hosted Manchester United, searching for their first points of the season under Bruno Lage. The Red Devils gave Raphael Varane his debut while Jadon Sancho made his first start.

The home side began the game in lightning fashion with two brilliant chances in the opening five minutes. First, Adama Traore’s blistering run from his own half evading his markers found Jimenez whose shot from a tight angle was saved.

Chances at both ends in the opening stages.@AWBissaka makes a huge block to deny Wolves an opener, before @MasonGreenwood attempts to steer @Daniel_James_97's strike on target, but it goes just wide.#MUFC | #WOLMUN pic.twitter.com/GhCXTRNUKP

Next up, from a United corner, Wolves broke quickly with Trincao’s shot on goal only stopped on the line by a sliding Wan-Bissaka. United were struggling to deal with the pace of Wolves as Moutinho was the next to waste a good chance from inside the box after an errant pass from Sancho.

Chance for Moutinho! He clears the bar from inside the box after good work from Raul to rob the ball back.#WOLMUN pic.twitter.com/C0PZrGrcgc

Solskjaer’s side were certainly under the pump through the midway of the half and were barely able to get the ball to their playmakers. Wolves were overrunning them in midfield with Adama using his physicality and pace to great effect. The only thing missing so far was a goal in what was already a cracking contest.

United did have the ball in the net but Fernandes was flagged for offside. They were trying to get forward more with the best chance coming right at the stroke of halftime. Fernandes’ clever flick released Greenwood whose shot across the goal shaved Jose Sa’s fingertips as it went wide. The half ended goalless but Lage’s men were clearly on top.

The first 15 minutes of the second half was a less pacy affair, but Wolves were still in charge. Fred saw a harmless shot on target saved with Cavani coming on for James to provide a central point of attack. On the other side, Trincao scuffed a great chance after being left unmarked in the penalty box.

A corner kick from Moutinho found Saiss whose header was well saved by De Gea before the follow-up was also somehow kept out by the Spaniard. Wolves were literally knocking on the door now. Pogba on the other hand shot straight at Jose Sa who palmed it over.

Wolves’ profligacy cost them as Greenwood beat his marker into the box before rifling a shot from the right side which beat Jose Sa in goal. There was a bit of controversy surrounding it given Neves was down while the goal was scored. VAR gave no indication to the referee to consult the pitchside monitor and it remained 1-0.

Wolves were understandably deflated after that and were unable to create any more good chances to draw level. A raft of changes also slowed the intensity as Solskjaer won in his 100th game in charge of the club.

Solskjaer first 11 took a second reading when he announced it. Pogba, who had been so successful playing on the left flank so far, was partnered alongside Fred as the two defensive midfielders. His position was taken by Sancho with Dan James coming in on the right as Greenwood was made the furthest man upfield.

Though this robbed United of Pogba’s immense influence as a threat, this was a move possibly done to counter Wolves’ speed in midfield. Nevertheless, the away side were unable to cope with the attackers running at them the entire first half and were indeed lucky to have remained on level terms.

3 – Mason Greenwood is only the second teenager in Premier League history to score in each of his side's first three games of a season, after Robbie Fowler for Liverpool in 1994-95. Starring. pic.twitter.com/xcmGPpCUIO

They had De Gea and some poor finishing to thank for keeping their clean-sheet as Greenwood’s fine finish in the 80th minute was enough to seal all three points and set a new record of 28 Premier League matches unbeaten away from home.

Wolves came into the match as the side having had the most shots without scoring so far. This match gave yet another indication of why that was the case. Adama, Jimenez, Trincao all had chances to score within the first 20 minutes of the game through good positions. However, all of them saw their shots either saved or blocked by some desperate defending.

The finishing left a lot to be desired and it was the same case in the second half as well. Trincao wasted a golden chance before Saiss saw a double-shot brilliantly saved. All of those wasted efforts came back to haunt them with 10 minutes remaining. Though Wolves protested furiously, Greenwood’s solo effort consigned them to a third straight defeat with no goals scored till now.

NO TEAM IS PERFECT

Will Manchester United be finally able to sign a defensive midfielder? Unlikely. Should they be judged on today’s performance? Yes. Fred and Pogba are a terrible pair in that position while Matic will be outrun by a lot of players. McTominay’s absence is big but a team should not have to rely on only one player in a particular position.

Their attacking richness is waiting to be refilled as Ronaldo returns after the international break in all likelihood. For Wolves, they have already signed Hwang Hee-Chan who will no doubt sharpen their forward line. Lage knows he has to improve fortunes quickly and start finishing their chances.