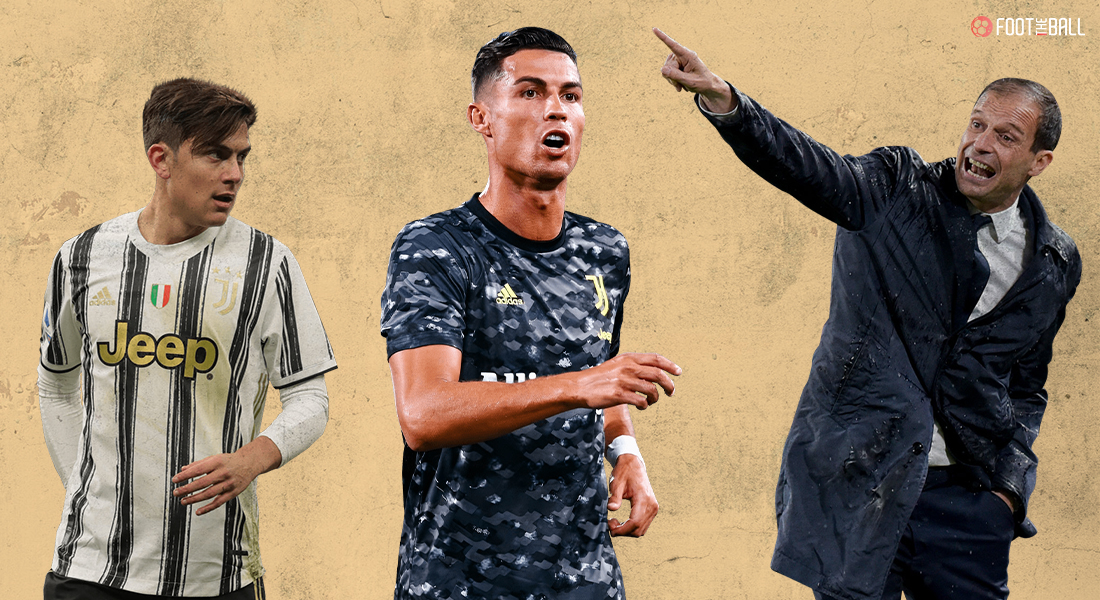 The world prepared itself for an unlikely reunion when now-former Juventus forward Cristiano Ronaldo agreed to join his ex-club Manchester United.

An unbelievable transfer window is coming to an end with Ronaldo signing for the Red Devils. And while Juventus might lose the services of the 5 time Ballon d’Or winner, his departure to England might benefit the Italian club.

While for Barcelona, the post-Messi era could be hard as mentioned by Joan Laporta in his interview, for le Zebre the situation could be the opposite. Although Juventus are yet to register their first win in the Serie-A this summer, Allegri might benefit from Ronaldo’s departure. This article finds out who can the Portuguese’s departure benefit Juventus in the long run?

Back in 2012 when Ronaldo and Real Madrid were knocked out of Europe’s premier competition, the Portuguese promised the fans at Santiago Bernabeu a Champions League trophy. And the world is aware of what happened next. Los Blancos conquered Europe four times in five years replicating the heroics of the earlier Madrid outfits.

And when Juventus purchased the talismanic goalscorer for a record 100 million euro fees they expected him to repeat the feat once again. Primarily signed for landing the Champions League title in Turin, the top-scorer of the European competition must have imagined those glory nights in Juventus’ jersey this time out.

Leave aside winning the Champions League, a Ronaldo-led Juventus failed to even challenge for the European throne. They were humbled by Ajax, Lyon, and the latest addition to the catalogue was Porto, as Juventus crashed out of the Champions League every time. Now Juventus fans would debate that these defeats weren’t only because of Ronaldo, but the Bianconeris still couldn’t achieve the dream of winning the prestigious piece of silverware.

With Paris Saint Germain assembling one of the best squads in football history and Manchester City going from strength to strength, Juventus’ chances of winning the competition were seemingly lower. While reigning European champions Chelsea, purchased Lukaku to help them defend their crown.

And if domestic competitions are taken into account, Juventus were anyways one of the strongest outfits in Italy even without the veteran’s presence. So Ronaldo’s departure to Old Trafford could be considered a triumph for Allegri’s roster.

Another point shrouding Ronaldo’s transfer was how the Portuguese were dampening Juventus’ financial chest. Ronaldo’s signature three years back might have cost Juventus a fortune but the Italians were expected to become a stronger outfit in the world.

They have added one of the world’s best in their squad, and with Ronaldo came money and popularity. And when Ronaldo is leaving Juventus, le zebre are nowhere close to being the most popular or being the richest club in the world. Juventus reported a deficit of 40 million euros in Ronaldo’s first tenure in Italy, clearly hinting that the forward’s arrival in Turin isn’t turning Juventus’ scenario upside-down.

And when the club asked its shareholder’s to invest a whopping 340 million pounds in 2019, Juventus’ director clearly said that he’s looking to bridge the gap between the Italians and the other European titans. But those European elites have proven their worth in the biggest stage, the Champions League. While for Juventus, the last title came in 1996 and even Ronaldo’s arrival couldn’t change that statistic.

Cristiano Ronaldo's yearly salary at Juventus compared to his yearly earnings from Instagram.

Another factor is that Cristiano Ronaldo earned 31 million euros per year after tax at Juventus. According to Forbes, only Lionel Messi pockets more than the Portuguese. And if Juventus are paying such a hefty amount to the Portuguese, they would have expected him to win more than domestic silverware with the club.

Lastly, the cheque gained from the transfer can be utilised by Juventus in different aspects of the game where the Italians need an improvement. They need some major additions in the centre of the pitch along with a few changes in the backline. While the money saved from Ronaldo’s transfer can be invested in giving out contracts to other disciples of the club like Paulo Dybala.

Leaving aside the trophies and the number game shrouding Ronaldo’s Italian challenge, Juventus never clicked when Ronaldo was starting for them. The club has changed three managers in three years, and have never drawn a long-term plan for their success.

They have failed to win matches when Ronaldo didn’t perform astoundingly well, and the dependency is not on Ronaldo but the brand value of the Portuguese. You cannot expect the striker to score a hattrick every time the Italians were in trouble in Europe or domestically.

Now, whenever a manager rested Ronaldo or if the Portuguese weren’t available, the young shoulders of Chiesa and Dybala took responsibility and Juventus flared with flying colours.

Different players were tested alongside Ronaldo but he couldn’t find himself the perfect partner which kept the musical chairs going. And although three different minds tried, none of them could establish an eleven where Ronaldo was the fulcrum of the team.

For instance, when Lionel Messi played for Barcelona, everything that happened for the Blaugrana went through the Argentine making him the most crucial piece in Barcelona’s puzzle. And if Messi wasn’t playing, Barcelona looked out of ideas and had to fabricate opportunities from awkward situations.

The last factor is that Ronaldo’s departure to Manchester United means that Juventus go back to the position of being ‘Challengers’ rather than being ‘Contenders’. The extra pressure that came with Ronaldo’s presence has gone away to England. Although Juventus would be expected to perform exceptionally well in Italy, the fans in Turin wouldn’t keep impossible expectations in Europe.