NOT SO BEAUTIFUL GAME 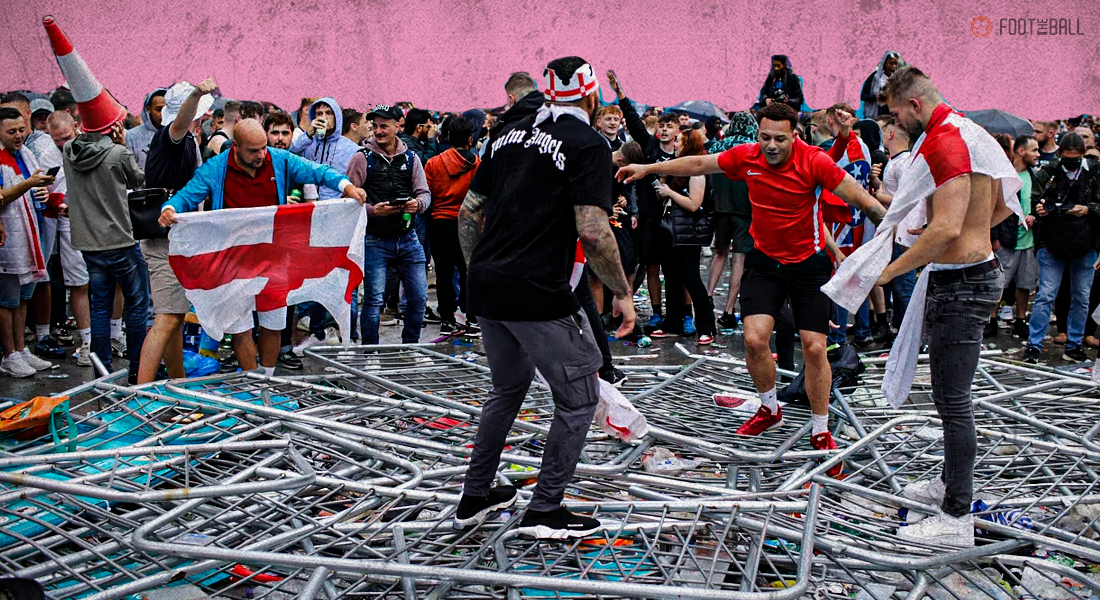 With the fallout from the saga of racism engulfing players of the England squad, matches held at Wembley have been garnering widespread notoriety for events that preceded and succeeded it. Indeed, the final three games of the tournament, all held at the iconic national stadium have been the hotbed of chaos and unruly fan behaviour.

#Italy won the #Euro2020 by beating England 3-2 on penalties

The defeat however didn’t do down well with English fans who attacked fans of Italy after the match ended.

Along with the torrent of online abuse to players on-field, female supporters of the team have spoken about an atmosphere of horror and dread across the whole week. This, they say, was evident right from the commute to the matches as well as during the games themselves. However, for followers of the game and a large number of the country’s population too, this is nothing too surprising.

UGLY SCENES ALL THROUGHOUT

The fan culture and behaviour during England’s games, especially at home, have long been a subject of shame and disorder. Coupled with the fact that the national team actually put up one of its finest performances in ages led to worsening of the situation as the contrast became stark. Several female fans have recounted stories of the bedlam they witnessed firsthand, with frequent usage of words like “misogyny,” “scared,” “afraid,” “sexism” and “safety.”

Losing a final is heartbreaking. But the fallout is agony 💔
Racist abuse of national heroes.
Women at 38% increased risk of domestic violence because England lost a game of football.
Messages urging Black fans to hurry home to safety, away from the baying mob.
Ashamed.😞

Just from these, one can sense the conditions that prevailed in the streets. This comes at a time when worldwide efforts have been concentrated on getting more women involved in the beautiful game. Though these are issues that happened off-field, there is no escaping the societal thinking. The stories that have come forward have quite a few things in common. Men of all ages getting overly drunk and shouting obscenities at women or groping/manhandling them while thinking they have a free pass. This kind of bheaviour puts the entire game at risk, but most affected remain the non-male supporters.

Sick to my stomach. Trying to enjoy the occasion but my feed is just filled with footage like this. Why? https://t.co/SGrFFpKvua

The viral image of the little German girl crying on camera invited widespread ridicule and vile comments from a large section of England supporters. Worse was to come during the semi-final against Denmark. Jeanette Jorgensen, who attended the game with three of her family members, recalled how hooligans started “pulling my hair” with comments like “you don’t belong here.” Notwithstanding the extremely appalling conduct, that last part would return more forcefully during the final.

Having made the showpiece fixture after 55 years, excitement and fan fervour was through the roof. That led to one of the ugliest scenes to be witnessed before a match. Thousands of non-ticketed fans rushed the barricades around Wembley, attacking stewards, other people, and causing a great havoc. Not only was a large scale of proprietary damage done, harm to human life was evident everywhere one looked.

A group just rushed the gates at Gate J and forced the doors open here at Wembley. Utter shambles pic.twitter.com/IzTmg25zUQ

It got so bad that supporters actually got physically violent, with multiple reports of injuries emerging. Drunk, unruly crowds were threatening everyone that tried to stop them or control them, including the aged fans and children. Beer cans and bottles were smashed at will while women have come out with harrowing tales of being in fear all throughout these escapades. Even while going to the game, there were scenes of great ruckus surrounding women who were made to feel “uncomfortable,” “nauseous,” and the general sense of danger.

Taken aback by the response to this. Over 400k views for our attempt to piece together what happened with the crowd trouble at Wembley. Worth reading the comments too – people who went talking about how they had a negative experience. pic.twitter.com/W9V78hHStV

Things did not improve after the final either, with England fans having allegedly assaulted Italian fans and burning their flags. This happened after the semi-final as well, and adds to the long list of derogatory homophobia, xenophobia and racism that exists in society at large. Though there have been fingers pointed at the police for not deploying in adequate numbers or the government being unprepared, it largely comes down to mentality.

The thought that women supporters of the game are only there to be catcalled and made uncomfortable is what drives these sort of events. This basis of division is present due to the archaic notion that football is somehow still only for the men. The absolute disregard for respect and basic principles at these games are a frequent sight in England, a country where domestic violence and abuse increases each time the team plays.

'The security operation at the European Championship final was the most shambolic I have seen at a sporting event in 25 years attending them all around the world' – @ben_rumsby gives his verdict on yesterday's Wembley chaoshttps://t.co/F592lVwtqH

It was no different in the aftermath of the final as well, especially with the Three Lions losing. Aside from a few arrests made by the police and some loosely worded condemnation by senior police officials, there has been nothing of note. Could the police or law authorities have done anything different? They could have come prepared a bit more at the stadium that is for sure. Leaving unarmed stewards to battle raging, testosterone-charged crowds is not their work. This kind of trouble has been rampant for years which will not be solved so easily. Apart from a change in internal approach of the fans, accountability will also be needed.