WHY THE WORLD CUP QUALIFIERS BETWEEN BRAZIL, ARGENTINA AND MOROCCO, GUINEA WERE CANCELLED?

The long break between club football is filled with the international break. Despite the difficult conditions around the world, the international break is going on. Bizarrely, two World Cup qualifying fixtures have been abandoned in two different continents of the world. Brazil vs Argentina was cancelled due to the breach of pandemic protocols while the game between Guinea and Morocco was abandoned without the ball being kicked due to a Coup d’etat in Guinea.

While both the conditions are vastly different, they echo the same theme. International football during the pandemic was always going to be a huge problem. Each country has different covid protocols and quarantine restrictions making international travel a nightmare for the players. Besides, many players have contracted the virus while coming back from the international break despite all the security measures. Yet, the players don’t mind going through all those difficulties when they get the call to represent their nation.

The situation in Guinea was a bit different as it didn’t have anything to do with the pandemic. The rebel storm was brewing in the African nation and it boiled over during the recent international break. With the condition worsening, their participation in the AFCON which is just months away is in doubt.

FootTheBall brings you all you need to know about the abandoned World Cup qualifying fixtures and what happens next?

THE GRUDGE MATCH TAKES A HIT

Hosts Brazil welcomed arch-rivals to the Corinthians Arena for their World Cup qualifying fixture. They had revenge on the back of the mind for the reverse suffered in the Copa America final recently. There was a cloud of doubt hovering over the match due to the participation of Premier League players in the fixture.

Premier League quartet of Emiliano Martinez, Emiliano Buendia, Giovanni lo Celso and Cristian Romero were named in the Argentina squad for Argetnina national team. The United Kingdom placed Brazil in its red list due to prevailing pandemic conditions in the country. It meant that the players had to quarantine upon entering the UK from Brazil. Knowing they’d miss a game after the international break, the players travelled. Similarly, the UK was on Brazil’s red list meaning anyone entering Brazil from that country would have to quarantine. 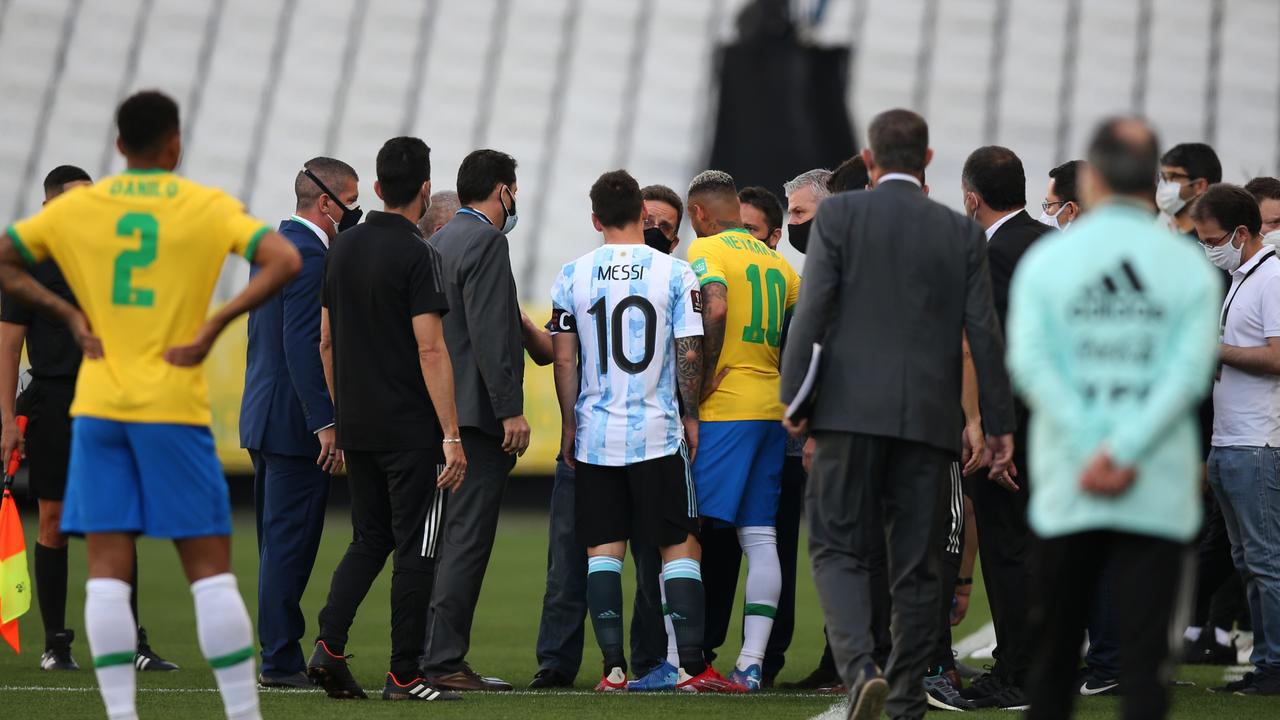 The players were forbidden from the game and were asked to isolate themselves before leaving the country. However, the Brazil FA made sure that the players were participating despite their deportation orders. The squad sheet was dropped and these players were starting the game for Argentina against Brazil. Five minutes into the game, utter chaos erupted as the match was suspended without a result.
Hordes of plain-clothed health and police officials stormed onto the pitch to apprehend the players from the Premier League. It led to a massive scuffle between the coaches, players and the officials. Lionel Messi, the Argentine captain, led his troops down the tunnel as he was fuming to the reception they received on the pitch. It was thought that the game would resume at a later stage. But as it turned out, Argentina players refused to turn up on the pitch and the game was abandoned.

“It was necessary to keep our sanitary protocol,” said Antonio Barra Torres, the head of the Brazilian Health Regulatory Agency (via Rede Globo). “We called the federal police, that went to the hotel and we found out that they had already left for the Stadium. The rest is what you’re watching live.”

Amidst the calls of an arrest for the players under question, the entire Argentine squad got onto the plane and left the country. A later statement from CONMEBOL said that the World Cup qualifiers fall under FIFA’s jurisdiction and they would wait for the global body to act.

A feisty clash was on the cards on the pitch, but due to the pandemic’s clutches, it turned into a brawl off the field. It is understood that Lionel Messi and Argentina manager Lionel Scaloni are upset by the events on the field. It would hamper the relation between the two countries in the future.

A COUP D’ETAT OF A KIND

Morocco visited Guinea for their World Cup qualifier match on Sunday evening. But mere hours away from kickoff, the conditions in the Guinean capital city of Conakry took a turn for the worse.

There was gunfire in the city and reports of a coup taking place on the streets. The players were asked to stay in the hotel and stay away from the walls and windows fearing for the worst. Morocco had star players like Achraf Hakimi and Roman Saiss while Guinea had their star power in Naby Keita and Amadou Diawara.

After hours of scrutiny, CAF, the African governing body and FIFA came forward with a joint statement. It read: “The current political and security situation in Guinea is quite volatile and is being closely monitored by FIFA and CAF. To ensure the safety and security of all players and to protect all match officials, FIFA and CAF have decided to postpone the FIFA World Cup 2022 qualifying match Guinea vs. Morocco, which had scheduled to be hosted in Conakry, Guinea, on Monday 6 September. Rescheduling information will be made available at a later date.”

The Morrocan team eventually left the country safely and it was confirmed through the Instagram story of their midfielder Sofyan Amrabat.

The President of Guinea, Alpha Condé has been arrested by his military.

A coup is underway in Guinea as you read this & the President has been taken away from the Palace.

Special forces that rebelled against him went to arrest him st the Presidential Palace.#RegisterToVote2023 pic.twitter.com/hZ3jiwn1jL

A few hours later, it was clarified that a coup did take place in the country. Colonel Mamady Doumbouya, the leader of Guniea’s special forces announced the takeover on state television on Sunday and urged the armed forces to back him. He explained that the people of Guinea were fed up with the corruption and mismanagement of the country by current President Alpha Conde.

It made the public go berserk on the streets as peace was completely disrupted and order would take time to be restored. The continual violence may lead to question marks over Guinea’s participation in the AFCON in January.