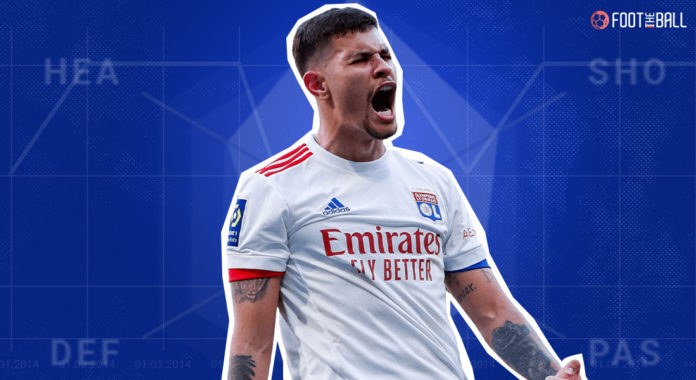 Newcastle. Cold, often rainy, tough crowd, nasty ultras, ultra-rich owners. So the usually dull winter transfer window was lit up when the Magpies signed Bruno Guimaraes from French side Lyon. €42million plus €10million for one of English Premier League’s best buys this 2022 January window is a straight-up intent deal.

And the story not just lies in Guimaraes trolling Arsenal with Newcastle announcement video!

But the real story lies in the numbers! The 2nd most fouled player in Ligue 1 this season, the highest for final third completed passes (342) and the highest passes completed in the opposition half (663) – Bruno Guimaraes is a Brazilian mix of former Chelsea star Willian and Manchester City’s hard tackling Fernandinho.

The Brazilian stats show that he has the physicality to succeed in the Premier League and has a wide range of passing to help the team launch attacks and build-up plays.

The Brazilain in the current season has played 1174 minutes at the defensive midfield position and has performed admirably. Smarterscout rates players between 0-99 based on various attributes, has given him a score of 91 when it comes to disruption. And at the same time, he has been rated as 94 for dibbling and a respectable 78 and 70 for attacking output and ball retention. 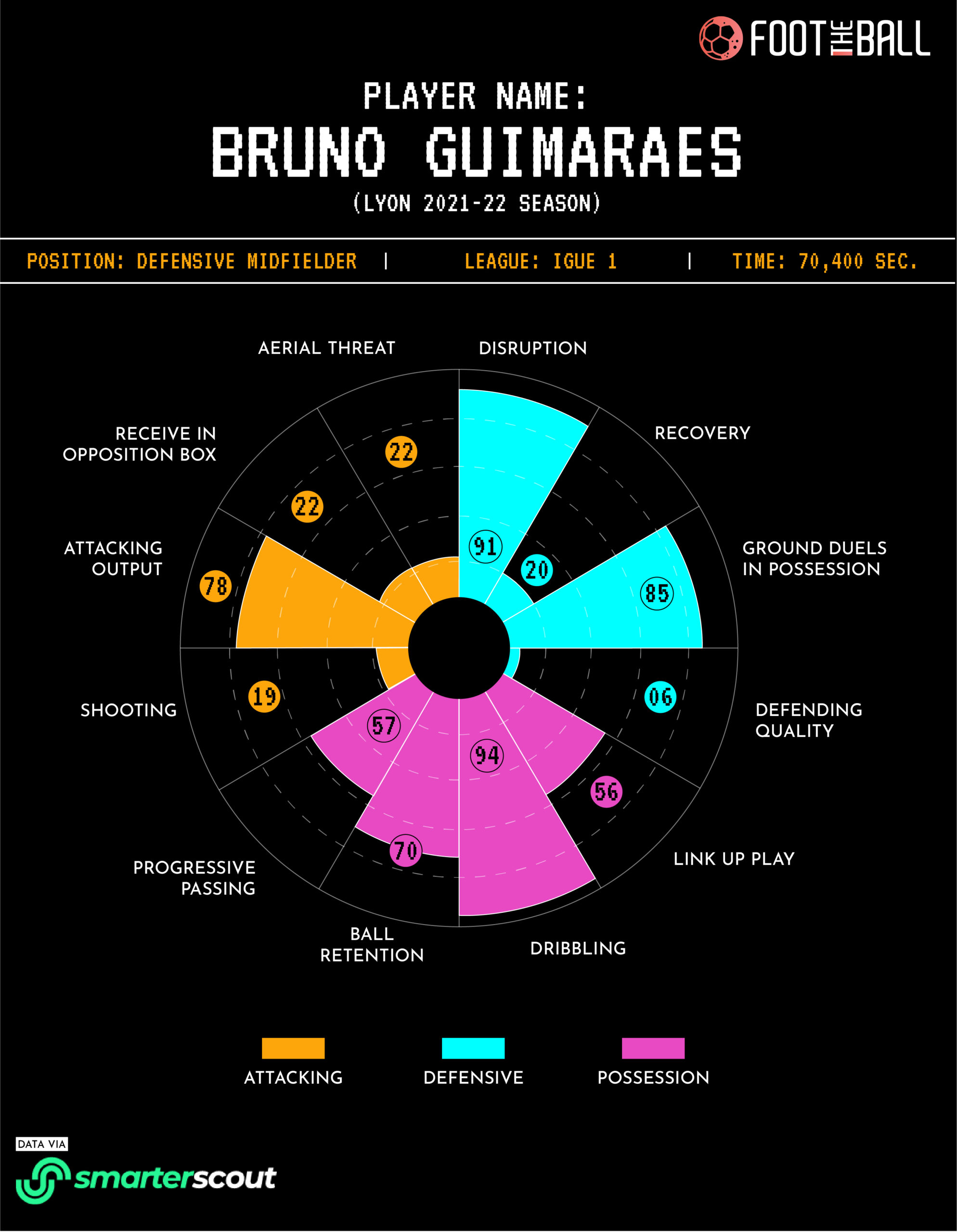 While these stats are impressive on their own, they look even more phenomenal when we look at his defensive stats. 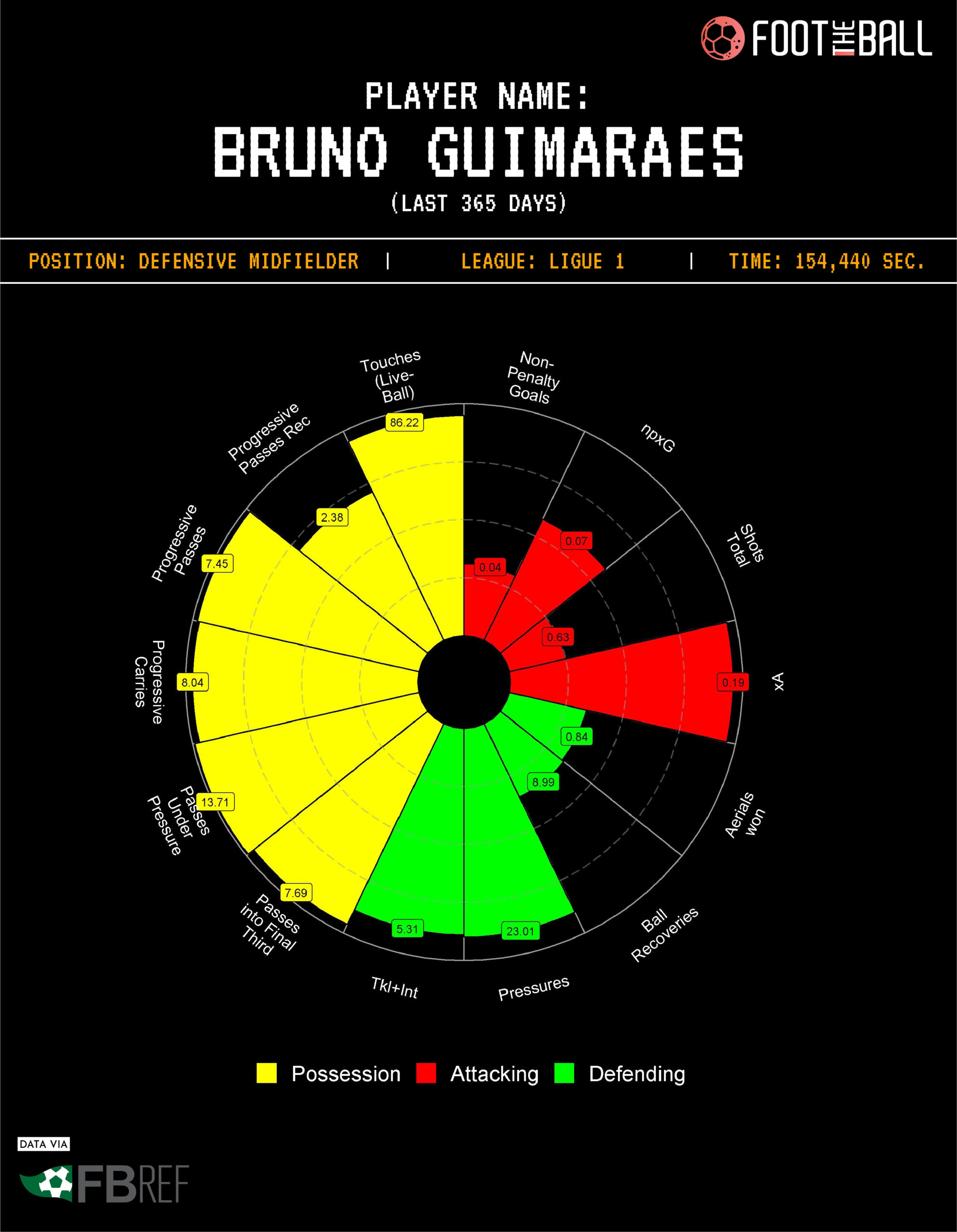 This makes him a rare player. Furthermore, he spent lots of his early years playing Futsal, which is why he is so quick-footed and accurate with his passing.

We can also gauge his immense skill set if we compare his stats with another player of the same calibre, i.e. Jorginho from Chelsea. 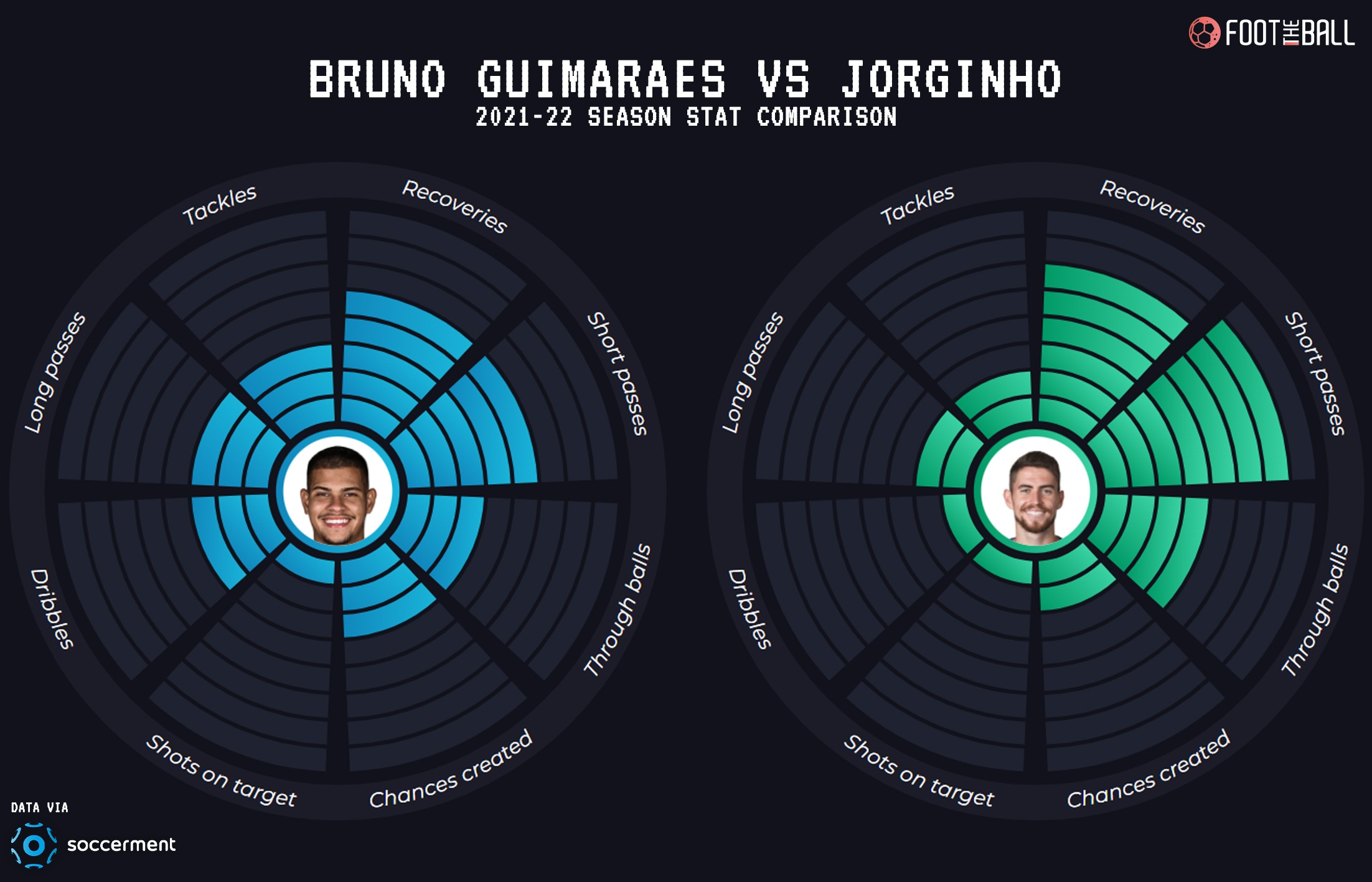 The master of two arts

This is perhaps why he is ranked as the third-best performing defensive midfielder in Europe by Soccerment ahead of Sergio Busquets, Jorginho, Casemiro and Declan Rice. 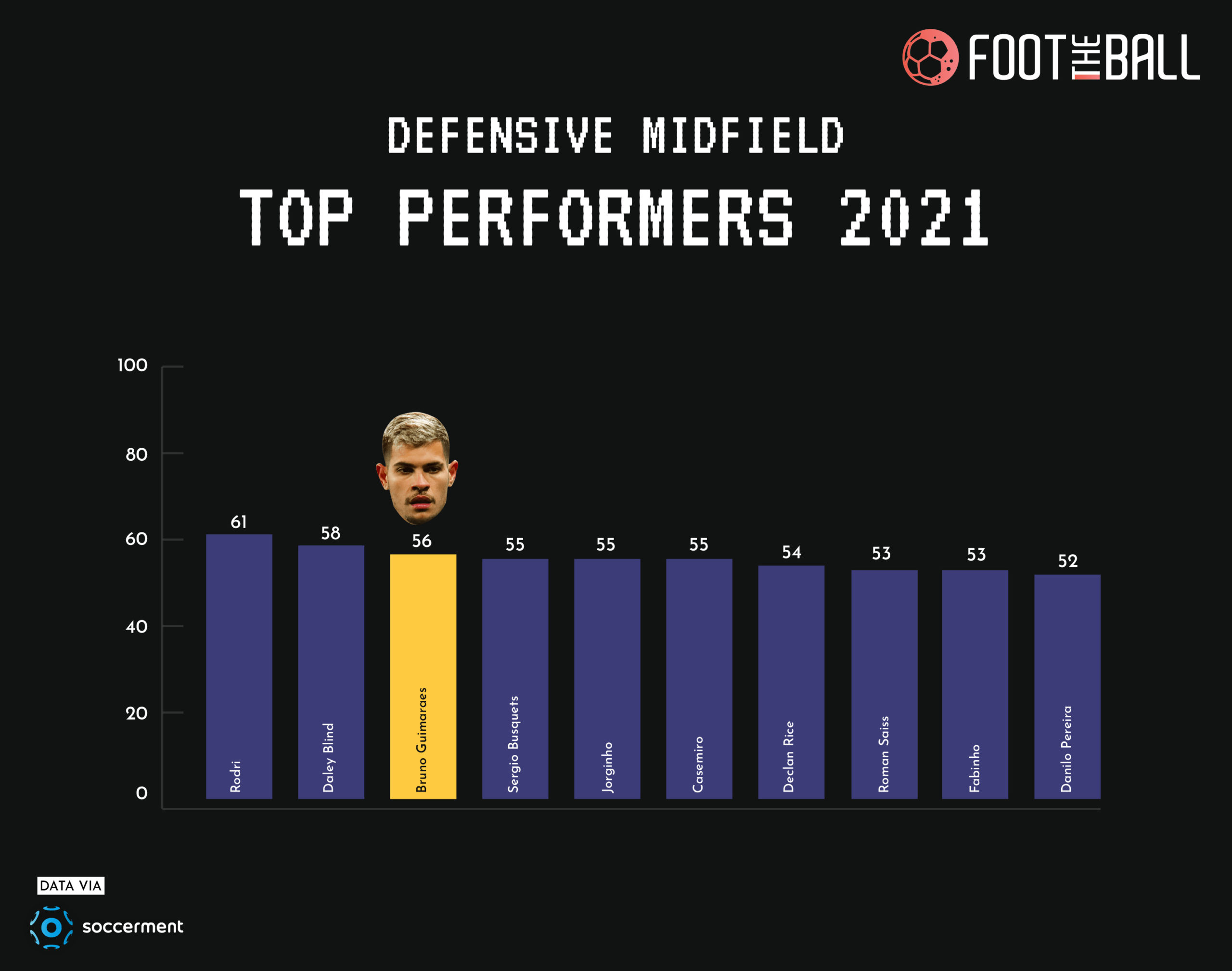 Why Newcastle signed him?

The form of Newcastle has been such this season that any of their new signings can be easily shown as an amazing one that will help the side immensely. However, in Brazilian, the Magpies have a player that can boost their performances across multiple areas.

The extent of Newcastle’s woeful form can be gauged by comparing it to the EPL average.

For instance, comparing the team’s performance on eight metrics (four on defending and build-up) shows us that they lag far behind their competitors. 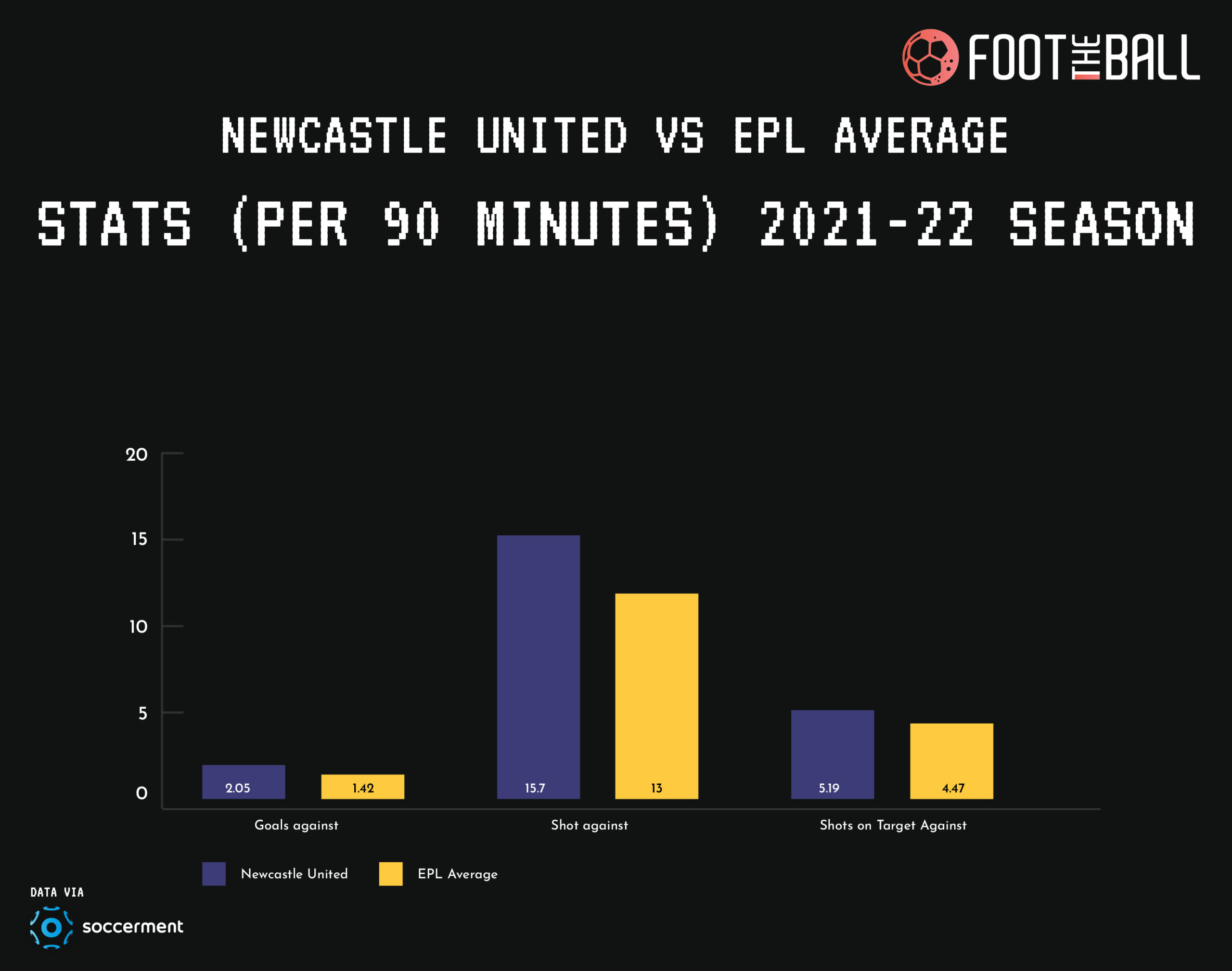 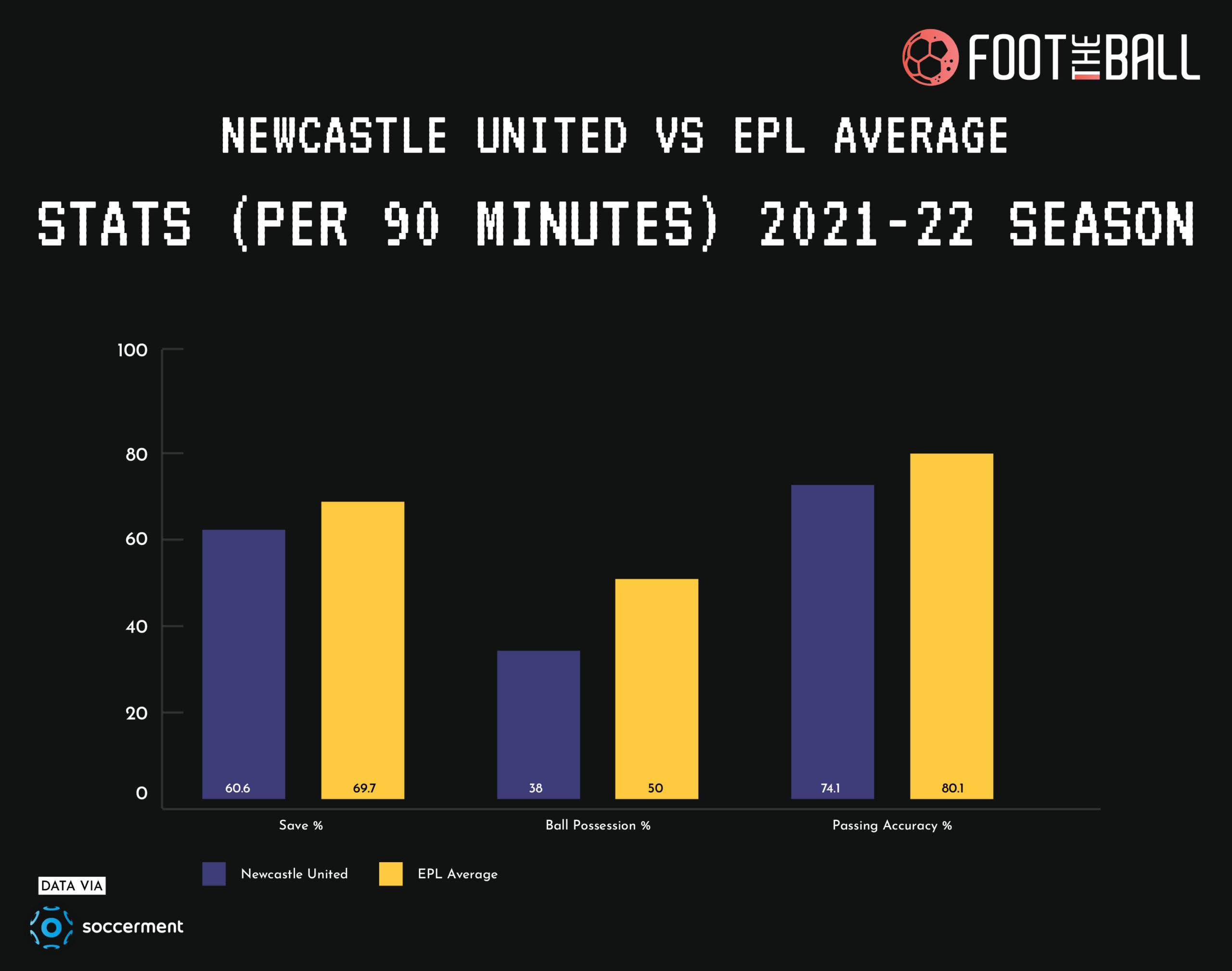 Another alarming stat for the team is the Passes Allowed Per Defensive Action (PPDA)(PPDA), which measures the number of passes a team makes for every defensive action. The lower the PPDA, the higher the number of pre3ssures initiated by the team, thus signifying an attacking and dominating play.

Taking stats from the top five leagues, Newcastle have the third-worst PPDA behind Salernitana (Serie A) and Union Berlin (Bundesliga). 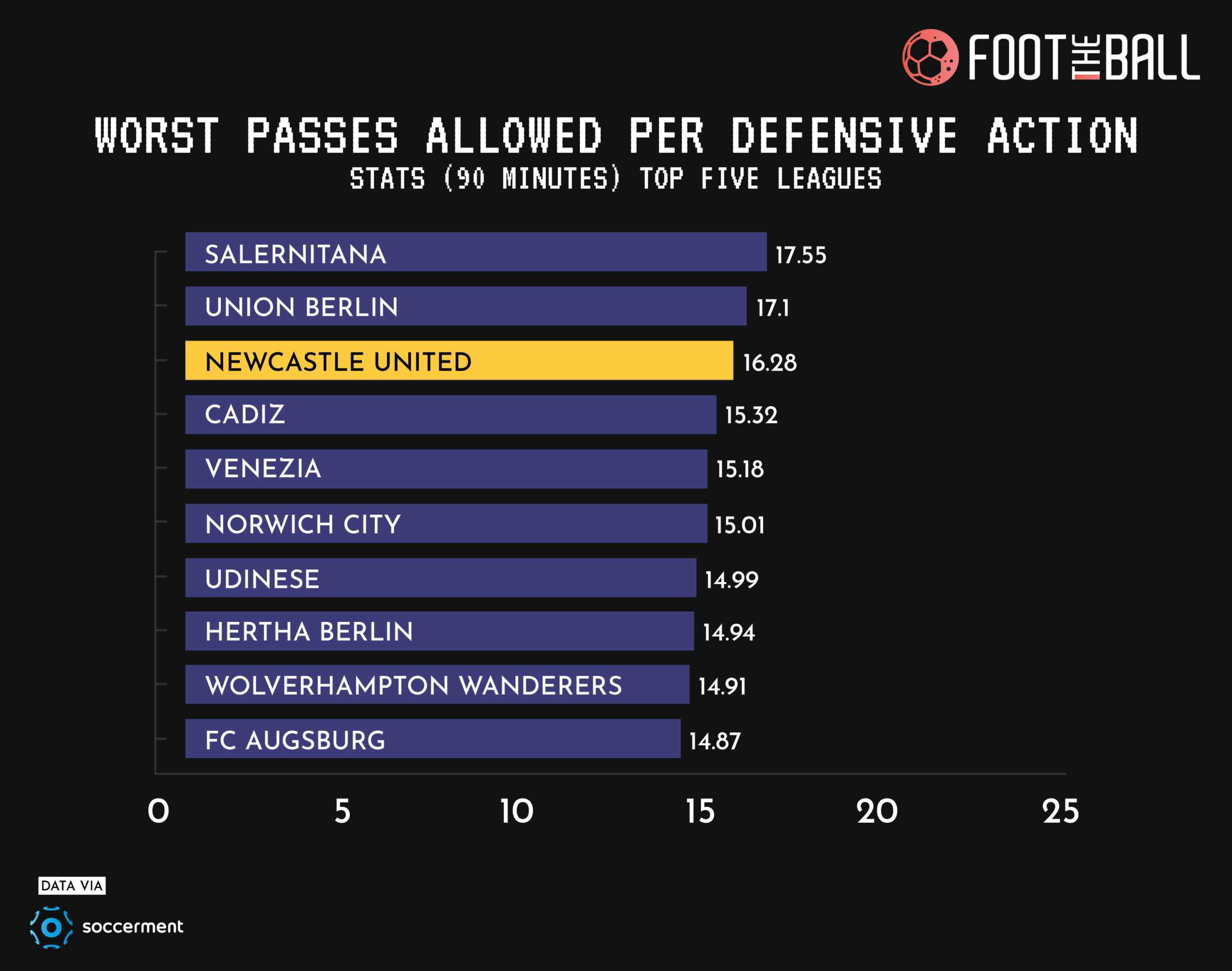 The 24-year-old’s stats make him the best chance creator and the best passer in the team while he ranks second in dribbling.

Newcastle have always had brilliant signings from Ligue 1 like Yohan Cabaye and Moussa Sissoko. However, with Bruno Guimaraes, they will hope that the rise is much higher.