GIANLUIGI BUFFON: WHAT NEXT IN A CAREER OF HIGHS AND LOWS FOR ONE OF THE GREATEST GOALKEEPERS EVER?

Every superhero has a great unique story. Buffon certainly has his own. The Italian has been one of the finest goalkeepers of his generation(s), and certainly the best for over a decade. From his early fledgling days at Parma to his rise as one of the greatest gladiators between the sticks, his unrestrained passion for the game has defied the barriers of age.

Buffon once joked that he could play until he is 65, At 43 and still playing at the highest level, it’s not farfetched to think otherwise. While he has won nearly every trophy in the game, the Champions League is what eludes him. Buffon has often expressed his desire to win Europe’s biggest club tournament before hanging up his boots. 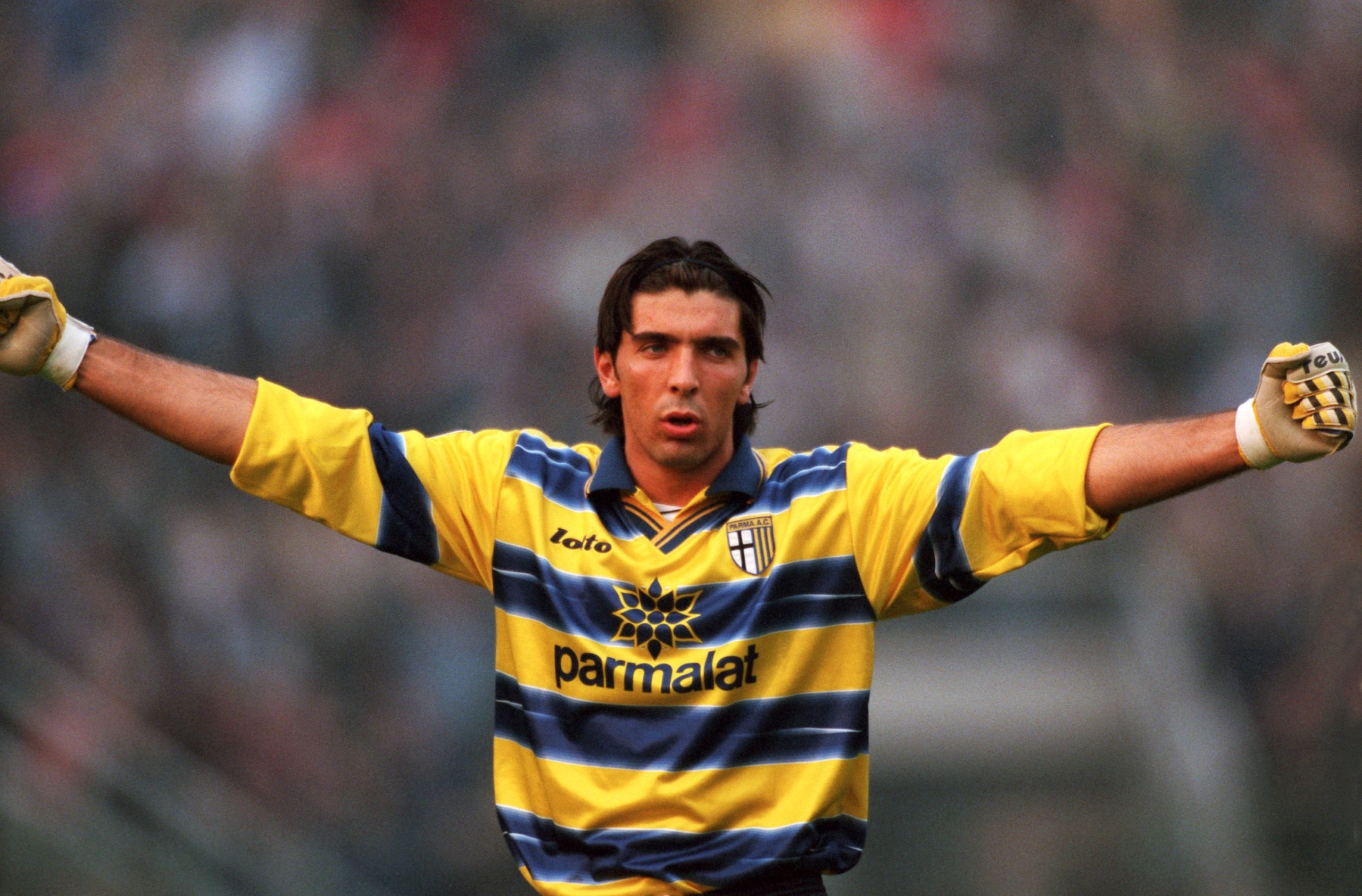 Gianluigi Buffon, during his early days at Parma. He has gone on to become of the greatest goalkeepers of all time. Image Courtesy: ESPN

Filling two glorious decades with a plethora of trophies, including the World Cup in 2006, Buffon has seized it all. As we take a look at his career over the years, it’s hard to circumscribe the endless moments of magic Gigi has produced.  Over the years it’s been hard to hear a pejorative opinion on the legend, loved by the many and adored by the countless, here’s a look at the top moments in Gianluigi Buffon’s career.

In 2001 Juventus sold Zinedine Zidane to Real Madrid and invested the money to rebuild an ageing squad. Marcello Lippi was putting together the jigsaw that would sustain for the next decade. The likes of Pavel Nedved, Lillian Thuram were all bought by Luciano Moggi, the Juventus Managing Director at the time.

Stats after #JuveRoma – by @optapaolo: before Totti’s goal, Buffon hadn’t conceded a
goal for 616 minutes in Serie A. pic.twitter.com/kEKCJaQHft

Among the many signings made that season, the one that stood out was the record fee paid for Parma goalkeeper Gianluigi Buffon. The €51 million signing was an astronomical amount and until recently was the highest fee paid for a goalkeeper, being eclipsed by Kepa’s transfer to Chelsea.

The record fee was a testament to Buffon’s ability and also the fact that he was a young star at 23. The gamble has paid as Buffon’s loyalty has seen him make more than 650 appearances for the club. And he has been a backbone of Juventus defence for over two decades.

Buffon’s desire to win the Champions League is no secret. The Italian had his first whiff in 2003 as the Biaconeri faced AC Milan in an all Italian Champions League Final. The game went into penalties. Even though Buffon saved two penalties, the dream of capturing Europe’s eternal glory ended up in heartbreak as the Old Lady lost to Milan.

Buffon was outstanding all game, churning out outrageous saves. In the 17th minute, he pulled off an absolutely blinder, manufacturing diving save from a darting header of Pippo Inzaghi. Buffon was also instrumental in Juventus knocking out Real Madrid in the semi-final as he saved a penalty of Luis Figo.

2006 was a stellar year for Buffon and Juventus. After winning the Serie A at a canter, he went on to lift the World Cup along with many of his teammates. Buffon was electrifying all campaign and carried his superb form into the summer tournament as Italy won their fourth World Cup.

In the battle for the individual honours that year, his Italian compatriot Fabio Cannavaro won the prestigious Ballon d’Or presented by French magazine “France Football” to the best player of the year. Although many would argue that Buffon was just as deserving, he went on to win the Lev Yashin Award for best goalkeeper at the World Cup.

WINNING PROMOTION BACK TO SERIE-A

After the highs of 2006, came the sinking lows. Juventus were relegated to Serie B after being involved in the “Calciopoli Scandal”. An investigation proved relations between team directors and referee organisations. It implicated several teams including Juventus, Milan, Lazio, Fiorentina etc. Juventus were stripped of their 2004-05 league title and were demoted to Serie B.

In 2006, #Buffon won the FIFA World Cup 🏆, World Cup Yashin Award, was voted to the All-star team of the tournament, named to the FIFPro World XI & Uefa team of the year, IIHF World’s best goalkeeper, & was 2nd for the Ballon d’Or…yet still went down to Serie B. Imagine that.. pic.twitter.com/0P9bDN0KZn

Buffon remained loyal and stuck with Juventus. Despite the nine-point penalty that was imposed on them, Juventus went on to win Serie B and won promotion back to the top flight. His decision to stay and rejuvenate the club made him a hero among the fans, and still to this day he one of the most loved players within the club.

WINNING BACK THE SCUDETTO

The 2012 title was his first achievement as captain, a moment Buffon has highlighted as one of the greatest achievements of his career.

In 2018 Buffon announced that he would be leaving Juventus after 17 years to join French Ligue 1 champions Paris Saint Germain. 40 at the time, Buffon’s brought with him, a wealth of experience, and his desire to win the Champions League was a motivating factor to still play the highest level. 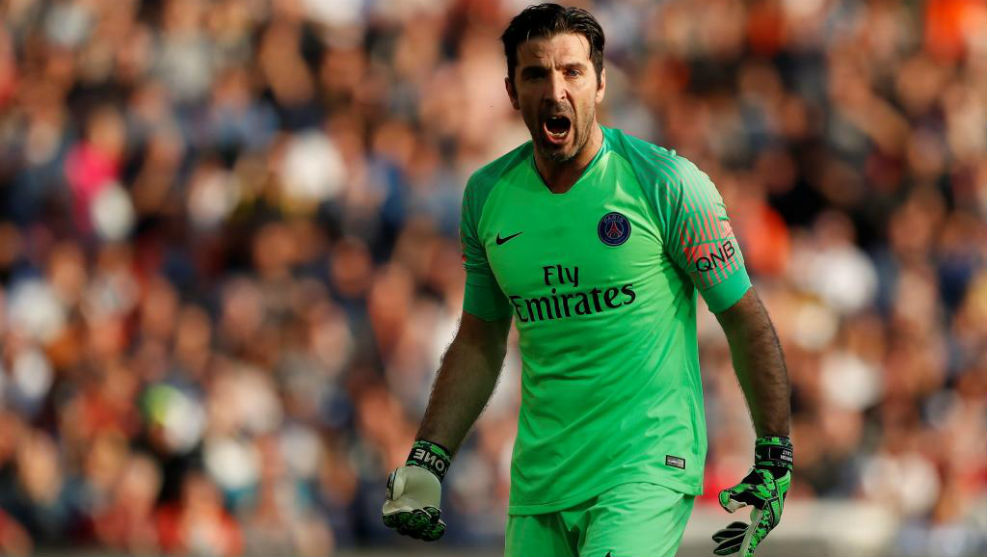 Buffon spent a year at PSG and helped them to win the league title. Image Courtesy: PSG Twitter

Signing just a one year contract, with the option of an extension, Buffon got to play alongside Kylian Mbappe, Neymar, Di Maria and Edison Cavani who wreaked havoc upfront. PSG were unfortunate eliminated in the quarterfinal of the Champions League to Marcus Rashford’s last-minute penalty for Manchester United. Buffon ended up winning the league, his tenth league title. He later confirmed his return to Juventus at the end of the season.

At 43, you still wouldn’t write him off of a fresh attempt at the Champions League with a new club. However, it looks grim and the possibility of him moving to the MLS or Qatar seem more believable.

The clamour around the MLS keeps growing every season, with the increased budgets and popularity among fans. In recent years the likes of Beckham, Henry, Zlatan, Rooney have increased the global popularity and investment in the league.

It could be an option that Buffon might consider, of playing out his career in a league that is improving every year. His wealth of experience would certainly benefit the MLS.

Qatar’s market as the global footballing centre is gradually increasing with them being granted the bid to host the 2022 FIFA World Cup. In recent years they have managed to pull off the exciting coup of Xavi. The Spaniard saw out his career at Al Saad and he now remains there in a coaching capacity. Buffon’s arrival before the World Cup could certainly popularise the league and the country’s ambition before the showpiece tournament.

Wherever he decides to go, Buffon’s legacy as a legend has firmly been cemented for a long time now. He will certainly be counted amongst the greatest players never to have won the Champions League but few players can say that they’ve won more than Gigi Buffon.

At the age of 43, Gianluigi Buffon has announced he is leaving Juventus. #Juve | @gianluigibuffon pic.twitter.com/66LOgoad2s