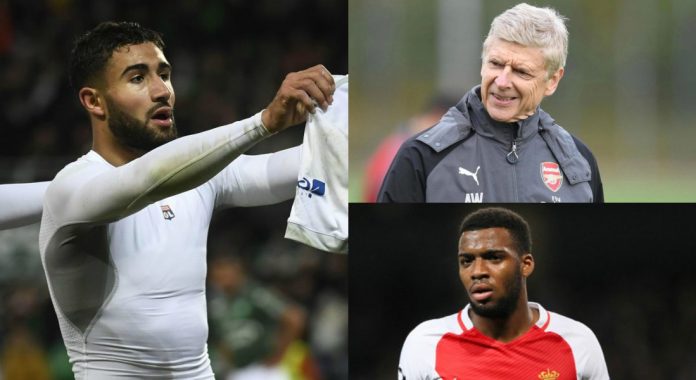 Arsene Wenger will drop his interest in Thomas Lemar as he is eyeing to launch a move for Lyon star Nabil Fekir, according to reports.

Arsenal were on the brink to rope in Lemar from Monaco on a British-record bid of over £90million during transfer deadline day this summer.

But the French winger snubbed a move to Arsenal, and now the Gunners bosses are not confident of landing him to the Emirates with La Liga giants Barcelona showing huge interest in the player.

And the Mirror claim that Gunners boss Arsene Wenger have identified Fekir as a perfect replacement for Mesut Ozil and Alexis Sanchez as they have entered the final nine months of their current contract with the North London club.

Foottheball had earlier revealed that the Gunners are on the brink of agreeing on a £60million deal for Fekir.

And now reports in France claim that Fekir is set to join his former team-mate Alexandre Lacazette, who joined the Gunners on a club-record £52m deal this summer.

Fekir has displayed incredible form this season – with 12 goals and four assists to his name in 15 games.

The France international is very versatile and can play in the No 10 role, as a second striker or even as a winger and this has caught Wenger’s attention and the Gunners boss, who is keen to secure his services in January if possible or during the next summer transfer window.

Sanchez is linked with a move to Manchester City in January and Ozil, who turned a £275,000-a-week new contract, is under the radar of Manchester United and Atleico Madrid – leaving Wenger to look out for new signings.

Real Madrid have also shown interest in Fekir and Wenger might face an uphill task in persuading the French star to make a switch to the Emirates.

Fekir recently told Le Parisien: “When you are from Lyon, the only French club that you are interested in is Lyon.

“There is nothing that tempts you more than that… Spain and England. Those are the two most attractive leagues, where they love football.”