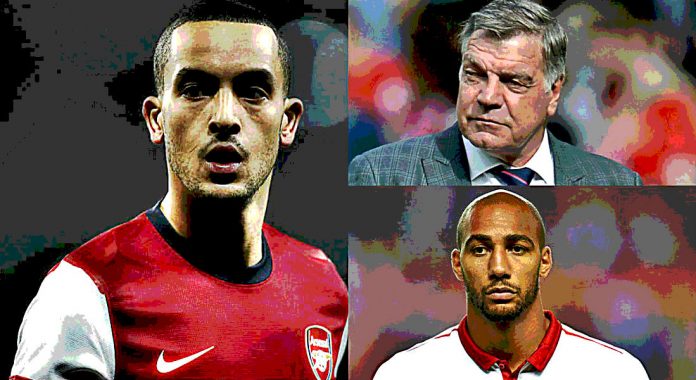 Everton boss Sam Allardyce is willing to offer Theo Walcott an escape route from Arsenal as part of a double swoop next month, according to the Mirror.

The Mirror claim that Allardyce will be handed a huge transfer war chest to bolster the Everton squad in January.

Walcott has 18 months left on his current £140,000-per-week contract with Arsenal.

The Three Lions forward, who has gone down the pecking order at Arsenal, has not started a single Premier League game for the Gunners this season and only came off the bench in three league fixtures.

His absence from the starting line-up could be due to an illness he picked up last month but even when the England star has been fit he has failed a seal a permanent place in Arsene Wenger’s squad.

But, according to the Mirror, Allardyce is ready to offer Walcott a fresh start in the Premier League at Everton.

Everton have witnessed resurgence in their form since Allardyce took charge at the Goodison Park but the club hierarchy are well aware that they need to add more firepower to the Toffees squad.

And Allardyce is also eyeing to hijack Arsenal’s move for Steven N’Zonzi, who has proved his mettle at Sevilla since making a switch to the La Liga club from Stoke in 2015.

N’Zonzi have worked with Allardyce during their time together at Blackburn and is now eyeing to seal a loan move until the end of the season.

N’Zonzi has fallen out of favour at Sevilla this term and admitted earlier this month that he wants to make move away from the La Liga club.

He said: “My future is clearly away from Seville. The only thing that disappoints me is the way it has ended.”