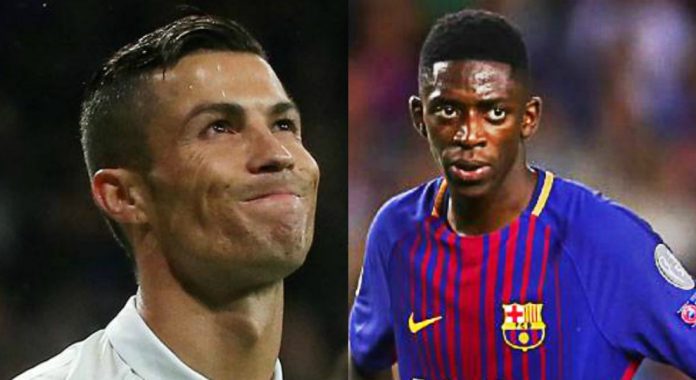 Real Madrid superstar Cristiano Ronaldo was reportedly stunned  when Barcelona splurged the cash to rope in Osumane Dembele during the summer transfer window.

The four-time Ballon d’Or winner was astonished that Barcelona spent a whooping £97million to sign Dembele from Borussia Dortmund to replace Neymar.

The French winger became the second-most expensive signing after Neymar, who moved to PSG on a world-record £200m deal in the summer.

And according to reports, Ronaldo said “who is that?” when he came to know that Barcelona signed Dembele as Neymar’s replacement.

Ronaldo went on to insult the French winger further, according to Spanish website Diario Gol.

He went on to say that Dembele’s move to Barcelona was only to help Messi.

Ronaldo reportedly said: “(He) comes to Barca with the mission to play for Messi, like everyone else.”

It is a mystery why Ronaldo never heard of Dembele before the French star moved to Barcelona.

The Real Madrid star had faced him in twice in the Champions League last season – with both the group stage games ending in 2-2 draws.

Ronaldo has drawn huge criticism for his poor form in the La Liga this season. He has managed to score just once in 8 league matches he has played this season.

Zinedine Zidane’s side are find it difficult to defend the La Liga title and are already 10 points behind current league leaders Barcelona.