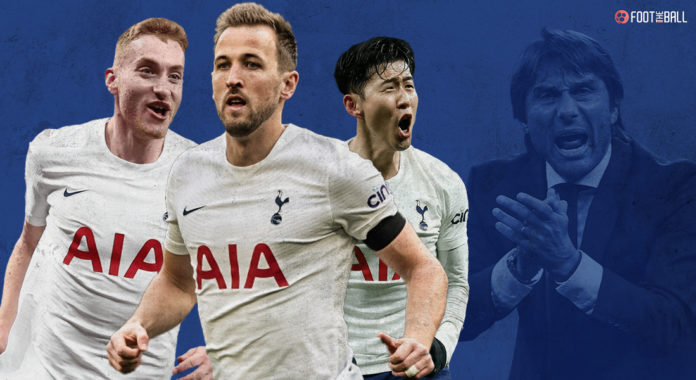 The Premier League has been lucky that it has bore witness to some of the most lethal attacking trios in European football. The attacking trident of Ronaldo, Rooney and Tevez in 2008/09 for Manchester United fired them to a treble.

Back when Manchester United was a force to be reckoned with.#MUFC #Ronaldo #Rooney #Tevez pic.twitter.com/ksoqFMXdk3

The attacking trio of Sterling, Suarez and Sturridge that powered the Liverpool title charge in 2013/14 or the lethal Mane, Firmino and Salah trio that fired Liverpool to a Champions League in 2018/19 and their first Premier League title in 2019/20.

A new lethal front three is emerging in the Premier League right now at Tottenham Hotspurs under Antonio Conte. The attacking trident of Dejan Kulusevski, Harry Kane and Heung-Min Son have single-handedly bolstered the chances of the Lillywhites securing a Champions League spot this season as their competitors are fading away.

The partnership of Harry Kane and Heung-Min Son has become the most effective and feared in the Premier League over the last two seasons. The addition of Dejan Kulusevski has added a new dimension to the Spurs attack.

His instant understanding with Kane and Son has made them a very lethal attacking trident.

The synergy between Kulusevski, Kane and Son is a thing of beauty to behold on the football pitch. The trio dovetail with each other so effortlessly and fluidly in the attacking third.

Their complementary skill set adds to their synergy making them arguably the most lethal front three in the Premier League right now, although the likes of Mane, Jota ,Salah and even Luis Diaz now might have something to say about it.

The creative spark of Harry Kane

Harry Kane has always had amazing creative and assists numbers for a forward. His ability to drop deep and find his man running beyond him is second to none. He has become the creator in chief for Spurs ever since Eriksen’s departure.

This season he has become even more effective at it. He is able to get free from the centre backs and hold the ball up. If he is allowed to turn he is always able to find the wing-back raking forward on the opposite flank or the winger on the other flank. This diagonal ball that has become part of Harry Kane’s repertoire and is hard to defend against.

When Kane drops deep into midfield to collect the ball his effectiveness is world-class. Just ask Hueng-Min Son who has been the main benefactor of Harry Kane’s creative passing.

Since Kulusevski arrived at Spurs Kane has found another outlet except Son. When Kane drops deep Son charges forward on the opposite flank stretching the defence while Kulusevski drops into the half-spaces on the other flank, always providing another attacking passing option for Tottenham’s number 10.

Harry Kane’s creative spark has enabled Son and Kulusevski to be effective.Thus the England captain has become the most important cog of this new lethal front three emerging at Tottenham.

The relationship between Harry Kane and Antonio Conte is ‘more than good’. When he joined Spurs, Conte immediately told Kane that he was the centre of his project. Key player. Untouchable. ⚪️ #THFC

…one of the reasons why Spurs director Fabio Paratici wanted Conte at any cost. pic.twitter.com/X2SVkYQUEa

Right now Harry Kane has 12 goals and 8 assists in the league. These numbers are bound to go up as Kulusevski, Kane and Son get more accustomed to each other’s movements, especially the assists numbers.

A perfect example of Kane’s creative ability was his performance against Gerrard’s Villa. The England captain did not score a goal on the day but his creative influence was clear to see for everyone watching.

The lethal nature of Son

Heung-Min Son has quietly become Tottenham’s most effective attacker. He has taken the baton from Kane as the most lethal finisher in the Spurs dressing room. This season he has scored 17 goals and set up a further 7 in the league.

He is constantly looking to exploit the space behind the opposition’s backline and does it very successfully. Capable of the extraordinary, he is lethal with both feet and even his head.

The Korean is a true natural goal scorer, his partnership with Kane has become the most lethal ever in the Premier League this season, overtaking the likes of Didier Drogba and Frank Lampard who had combined for 36 goals in the years they played together.

Son has always been a lethal finisher evidenced further by expected goals stats which he manages to outperform each season. If Kane’s passing is the spark then Son’s finishing is a smouldering fire constantly fanned by the England captain.

The additional threat of Kulusevski has helped Son a lot too. He is able to easily get on the end of Kulusevski’s grounded balls across the face of goal. Luckily the big Swede is extremely efficient at it. Kulusevski dribbles out the byline and zips in crosses for Son who is always making a late run into space in the box.

Dejan Kulusevski has looked at home since coming to the Premier League. Nobody in the league has more assists than the Swede since his arrival with 6. He has even scored 3 times already.

The young Swede has been the missing link for this Spurs attack. Last season except Kane and Son no other Tottenham player really made a mark. Defenders also found it easy to contain the duo, but the additional threat of Kulusevski has changed things.

🎙| Dejan Kulusevski on playing for #Tottenham: “I love the club, I love my team-mates, I love the coach.” pic.twitter.com/JCkMKhA0CG

Kulusevski has become the middleman between Kane and Son in a short period. Whenever the outlet of Son is closed off as an option Kane finds Kulusevski with ease who uses the half-space on the other flank to receive the ball and turn.

The ginger winger who plays like an inside forward for this Spurs side has immense technical prowess. He can hold the ball up when needed. Dribble past opponents with ease or play the perfect pass to set up a chance. He is also deceptively fast and strong. So even if he is afforded very little space and time he can be effective in the final third.

His all-round attacking capabilities had been the missing link for Tottenham. Kulusevski is also benefiting from the fact that EPL defences already know too well about the threat Son and Kane possess. Allowing him more space and time on the ball for now. It will be interesting to see how he adjusts his game once teams start recognizing attacking threat his poses.

* Since Kulusevski made his debut

A true testament to this new lethal front 3 at Tottenham is the goal and assist numbers of the trio. Kulusevski, Kane and Son since the Swede’s arrival have taken the league by storm. The trio rank first, second and third in this metric. Kane is on 13, Son on 12 and Kulusevksi is on 9.

If they keep playing like this together the trio will surely go down as one of the greatest attacking trios to ever grace the league.