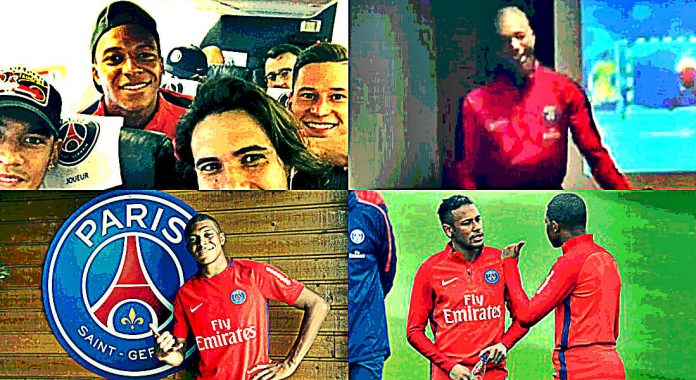 French teenage sensation Kylian Mbappe is ready to make his Paris Saint-Germain debut on Friday after he was named by Unai Emery in the squad to lock horns with Metz in the Ligue 1 clash.

Mbappe jetted to Lorraine with his team-mates, and it is understood that he will make his first appearance for PSG since joining the French giants on loan ahead of his permanent move next transfer.

And after arriving at the hotel, the 18-year-old wonder-kid belted out his traditional initiation song, which was very much enjoyed by his new team-mates.

French journalist Nassima Driouach took to Twitter and posted a series of videos – showing Mbappe giving a brief introduction speech while standing on his seat at the dinner table before singing with a bottle of water close to his mouth.

Mbappe  had displayed incredible form for Monaco last term – guiding them to Ligue 1 triumph and also to the semi-finals of the Champions League.

And this time around he has strated brilliantly by scoring his first international goal for his country last week against Holland in the World Cup qualifier clash.

Thiago Silva and Lucas Moura have also joined the squad after a lengthy absence, but Javier Pastore and Angel Di Maria has not been included in the 18-man travelling party.

It is expected that Emery will hand Mbappe a start on Friday alongside the other two members of a deadly front-three – Neymar and Edinson Cavani, who have already netted eight goals in between them this season.

PSG will permanently sign Mbappe on a £166million deal next year and the French youngster said during his unveiling: ‘It gives me great pleasure to join one of the biggest clubs in the world, which possesses the ingredients to become the best.’

‘Back in May, I was in the frame of mind that I would stay with Monaco. Certain events changed my mind.’

PSG have won all four of their opening games in Ligue 1 to sit top of the table on goal difference from Monaco, who also boast a 100 per cent record after four games.