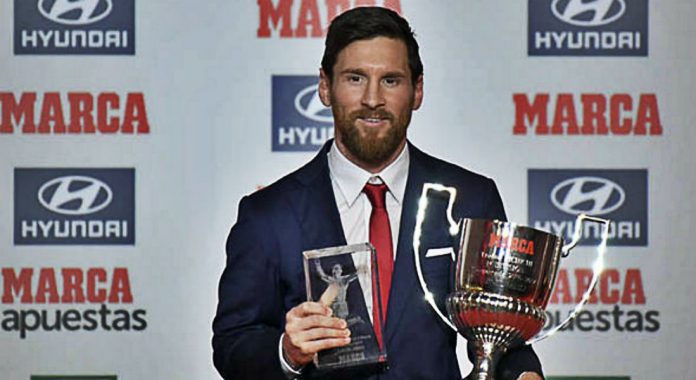 Argentine magician Lionel Messi called on his Barcelona team-mates to kick Real Madrid out of the La Liga title race.

Barcelona are set to lock horns with Real Madrid for the first time this season at the Santiago Bernabeu on Saturday as Zinedine Zidane’s men look to close the gap at the top of the La Liga table.

Barcelona come into the game 11-points ahead of their arch rivals Real Madrid, who have a game in hand following their Club World Cup triumph.

And while speaking at the awards gala, Messi explained what it is like to play against Real Madrid in El Clasico.

“It would be an important win for what it means. Real Madrid, their stadium… winning is an important advantage.

“We want to win that match not just for its significance.

“But also because of Madrid, because if we win we will gain an important advantage over them.

“After that there would be a lot of distance in the table.”

“There would still be a lot of league games left but it would be nice to be able to end the year with a victory and spend a happy Christmas.”

Messi will be hoping to repeat his last season’s El Clasico performance – when he clinched the crucial stoppage time winner – which was also his 500th goal for Barcelona.

If Ernesto Valverde’s side win on Saturday it would give them a huge lead over the Los Blancos – triggering a two-way battle for the tile between the Catalan giants and Atletico Madrid, who sit second in the La Liga table, just six points behind Barcelona.

The Argentine superstar bagged two more awards this week – the Pichichi award for being the top scorer in the La Liga for the 2017-17 season and the Alfredo Di Stefano trophy for the best player in the Spanish top-flight according to Spanish newspaper Marca.

After receiving the Alfredo Di Stefano Trophy, Messi said: “I already have several. Before the trophy was different, bigger and heavier.

“I’m happy to receive it again and I want to thank MARCA for this recognition.”

Messi then thanked his team-mates for helping him to win his fourth Pichichi.

He added: ”Thanks again, I want to share this and thank all my teammates. It’s a prize for the team as I said with the Golden Shoe.

“It’s not my main objective, ours is the titles, but if then these individual awards arrive, they are welcome.”

He has scored 16 goals in 22 La Liga games against Real Madrid and has 24 goals to his name in 36 matches against the Los Blancos in all competitions.

Messi is in red-hot form this season – with 14 goals and 5 assists to his name in 16 La Liga games.

Barcelona will need their most prized asset to deliver another sensational performance if they want to clinch all the three points at the Bernabeu this weekend.