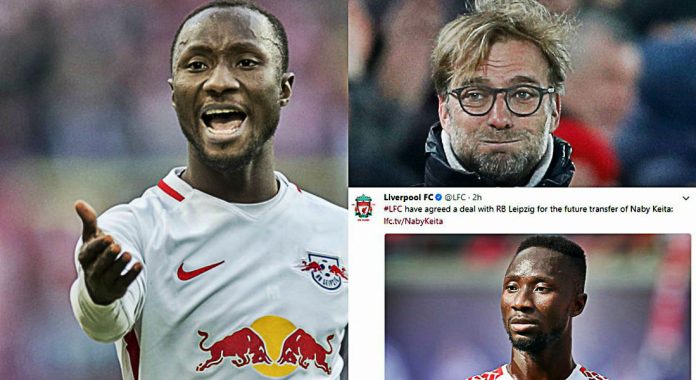 The Guinean midfielder will arrive at Anfield on July 1 2018 after the Reds matched his £48million release clause which will become active next summer.

Keita was under the radar of top European clubs after displaying incredible form to guide Leipzig to a second place finish in the Bundesliga next season.

His sublime performances for the Bundesliga club earned him a place in the Team of the Year 2016/17.

#LFC have agreed a deal with RB Leipzig for the future transfer of Naby Keita: https://t.co/FGn44gHUx0 pic.twitter.com/7ihBUi2M3v

The 22-year-old central midfielder will play for Leipzig for one more season but revealed that he can’t wait to join the Reds under former Dortmund boss Jurgen Klopp.

Keita told the club’s official website: “I am delighted that an agreement has been reached which will allow me to join Liverpool Football Club next summer, when I will become part of a project that excites me greatly.”

“My commitment to RBL remains absolute for the remainder of my time at the club. I have given my all every time I have worn the shirt – that will be the case until the final whistle, in my final appearance.”

“Having my future resolved means I can now focus on helping RBL achieve great things this season. Until I join my new club, next summer, I will remain an interested supporter from a distance.”

The Reds fans are elated after the deal went through after being linked with Keita throughout the entire summer transfer window, will now be hoping Klopp can land Thomas Lemar form Monaco.