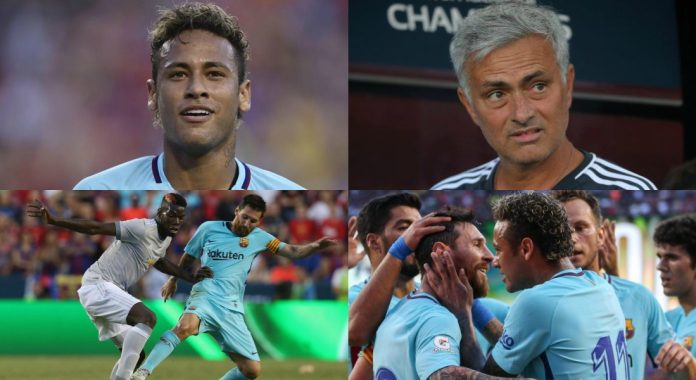 Neymar just proved why he is the most sought after player in the transfer market this summer after guiding Barcelona to a 1-0 win over Manchester United at the International Champions Cup.

Meanwhile, Neymar continued his sublime form for Barcelona – netting his third goal in two matches to hand Man Utd their first defeat of the pre-season tour at FedEx Field in Landover, Maryland on Wednesday.

Neymar and Lionel Messi dominated the proceedings for Barca in the first half. The Brazilian forward stripped Antonio Valencia off the ball in the penalty area to slot the ball home in the 31st minute – which was enough to clinch two consecutive victories for new Braca boss Ernesto Valverde.

Mourinho made eight changes in the United squad that started in their win over Real Madrid on penalties. Skipper Michael Carrick, Marcus Rashford and Jesse Lingard kept their positions in the starting XI, as David de Gea, Daley Blind, Chris Smalling, Victor Lindelof, Antonio Valencia, Henrikh Mkhitaryan, Paul Pogba and Romelu Lukaku were given a start in the International Champions Cup clash with Barcelona.

Barca also made changes following their 2-1 victory over Juventus. Luis Suarez, Jordi Alba, Samuel Umtiti, Nelson Semedo, Sergio Busquets and Carles Arena were in the squad – which was anchored by Neymar and Messi.

Man Utd made a positive start and their pace on the counter through Lingard and Rashford caused problems for the Barca defence early on.

Rashford picked Lukaku in the 3rd minute, but the Belgian striker failed to keep his effort on target.

Barca stepped up the gas as the game progressed and De Gea was kept busy by Neymar, Messi and Suarez.

Brilliant passing play from Barca opened up space for Messi, who almost scored the opener in the 12th minute but his low shot went just wide of the post.

After Man Utd’s world record signing Paul Pogba launched a shot from the edge of the area to test Jasper Cillessen, Rashford rushed into the area to launch a curling effort into the far corner but the Barcelona keeper managed to keep it out of danger.

Barcelona clearly dominated the game from that point as De Gea kept out Neymar’s effort from close range but the Real Madrid target could not stop the Brazilian just past the half-hour mark.

Valencia intercepted a pass from Messi but he was stripped of the ball by Neymar, who comfortably thumped the ball past De Gea in the 31st minute.

Barca had the opportunity to double their lead three minutes before the break but De Gea denied Suarez’s acrobatic effort.

It was their final contribution to the game as De Gea, Suarez, Neymar and Messi were all substituted at the half-time break. Barca replaced all 10 outfield players, while Mourinho made five changes.

There was change in the pace of the game but Man Utd looked shaky in their defence against a second-string Barcelona side.

Man Utd desperately searched for an equaliser but they lacked precision on the final ball.

Anthony Martial, Andreas Pereira and Pogba had chances to score but their inaccurate efforts didn’t trouble Cillessen. Man Utd’s sloppy defensive work allowed Pac Alcacer to play the ball through the legs of Eric Bailly before almost slotting the ball home from a curling effort.