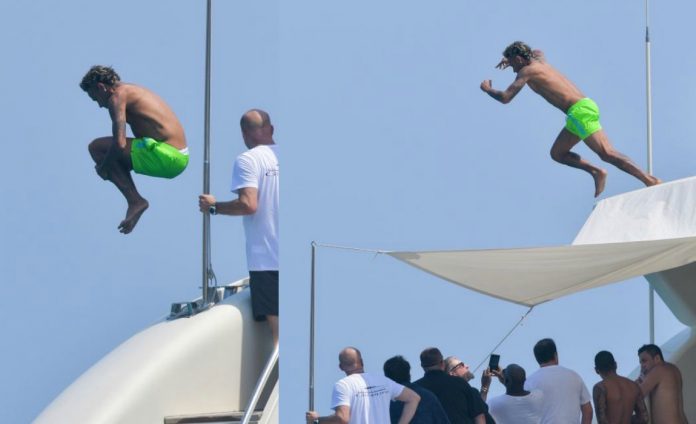 Ahead of making his highly-anticipated debut for Paris Saint-Germain this weekend, world-record signing Neymar has been enjoying a last-minute holiday in St Tropez.

The £198million arrival, who completed his sensational move from Barcelona last week, missed out on making his first appearance for PSG last Saturday due to a paperwork malfunction between the French league and their Spanish counterparts.

The new boy was not registered in time to take part in PSG’s 2-0 win over Amiens but received a hero’s welcome on a tour of the Parc des Princes pitch before kick-off.

The Brazilian is expected to play at at Guingamp this Sunday night — and he has been soaking up the sun ahead of the fixture.

Larking around with friends on Monday morning, Neymar — who donned a Hawaiian-themed outfit — enjoyed a trip on a luxury boat.

He was later snapped jumping off and bombing into the sea. PSG fans will no doubt hope he doesn’t injure himself as he enjoys time out of the spotlight on the pitch.

The forward was in high spirits, waving to photographers and posing for pictures following his high-profile arrival this summer.

On Sunday, the former Nou Camp favourite was seen sun-bathing in St Tropez with his friends.

Wearing black swimming trunks and sunglasses, the former Santos star showed off his athletic figure during his short break in the south of France.

The 25-year-old was joined by a number of female companions and male friends ahead of his maiden campaign in Ligue 1.

Clutching his red iPhone, Neymar cut a relaxed figure as made the most of his spare time before joining up with his team-mates for the forthcoming season.