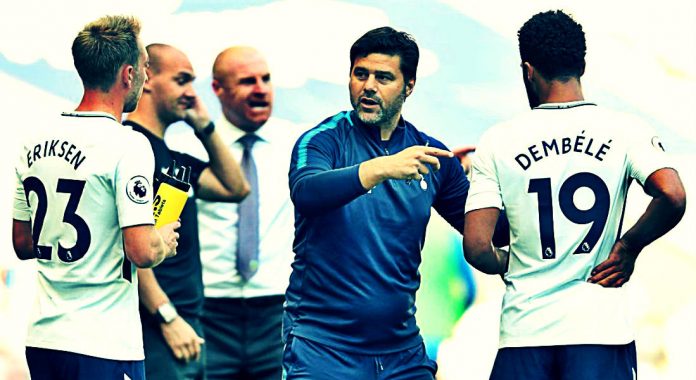 Mauricio Pochettino admitted that Tottenham Hotspur have a mental block – but accentuated that it has nothing to do with Wembley.

Chris Wood fired in the equaliser for Burnley to hold back Spurs from registering their first Premier League win at Wembley and this means it is still just two wins from 12 at the National stadium.

Spurs were leading through Dele Alli but they were robbed of three points by super-sub Wood as he clinched the decisive equaliser for Burnley.

Spurs boss Poch said: “We are showing a lack of concentration in different situations and in football you pay when you are not focused.”

“That is a mental problem we need to fix. Last season, if you said Chelsea would be champions, you would never have said that. We have to fix the problem.”

“I feel disappointed. It’s normal. We showed a lack of concentration at the end. It was a tough game but when you have chances to kill the game you must do it.”

“Then we conceded a goal with five or six players behind the ball. That was our mistake. We created enough chances to win the game.”

“We let them score so easily. That is hard to accept. I think Wembley help to break the defensive line, create chances, score a goal. We can’t complain. We need to stop.”

“We have a responsibility to do better, to try to win. Always the responsibility is for the manager. It’s a collective mistake. We are all guilty when we lose.”

“Of course, we need to make Wembley our home and perform the same way we did at White Hart Lane.”

Spurs hit-man Harry Kane missed easy chances and has now gone 13 matches in the month of without finding the net in the Premier League.

Pochettino said: “I feel sorry for him. But I am sure Harry will start to score as soon as possible. It is good that the next game is September!”

“It was unlucky for him. I am not worried. We are working hard to add more quality to the squad. I am confident we will get a minimum of three.”

Bunrley new man Wood, who joined the club from Leeds for £15m earlier this month, netted his first goal for The Clarets after getting on the end of a superb pass from Robbie Brady.

He said: “It is special because we got a great point away from home against a really good side. We created a lot of chances second half and deserved to take something.”

“Everybody knows the character at Burnley. We all work hard. We can improve on last season. It will take hard work. But we are not afraid of that.”

Sean Dyche said: “The belief and endeavour were outstanding. I’m pleased for Chris. He’s come into a good group and he’s enjoying it.”

“It was a sublime pass from Robbie and a fantastic finish from Chris. Overall I think we deserved it on the balance of play.”