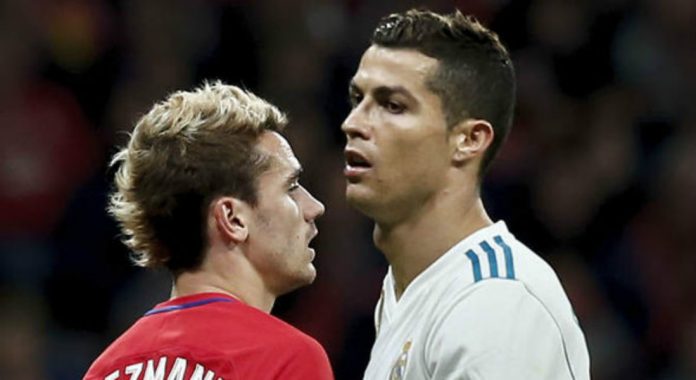 Cristiano Ronaldo discussed his plans to leave Real Madrid with Antoine Griezmann after being held to a goalless draw with Atletico Madrid, according to reports.

Ronaldo is struggling to find form this season and has managed to score just one goal in La Liga so far this season.

And speculations suggest that Ronaldo is not happy with his form and will leave Real Madrid next summer with reports claiming that the Los Blancos bosses are eyeing to replace him with PSG hero Neymar.

And according to Spanish website Don Balon, Ronaldo has discussed his own transfer plans with Griezmann after Sunday’s Madrid derby.

Both players disappointed their fans and clearly struggled to get back to their best at the Wanda Metropoliticano.

Ronaldo again displayed sloppy form and failed to capitalise upon a late chance to win the game for Real Madrid, who are now 10 point behind current league leaders Barcelona.

Griezmann also displayed poor form and Atletico fans made their feelings towards the French striker known.

And according to Don Balon, Ronaldo held talks with Griezmann after the Madrid derby.

Ronaldo told Griezmann that Real Madrid are no longer a side to challenge for major titles – if the current form is taken into consideration.

The former Man Utd man then told Griezmann that he will leave the club next summer as he is not happy with life at the Bernabeu.

Meanwhile, Ronaldo’s current form has not gone down well with the Real Madrid fans and they mocked the Portugal skipper after Sunday’s game.

Fans were not happy as CR7 has not yet made a single tackle in La Liga this season, and he also drew criticism for being outpaced by Atletico veteran Juanfran.