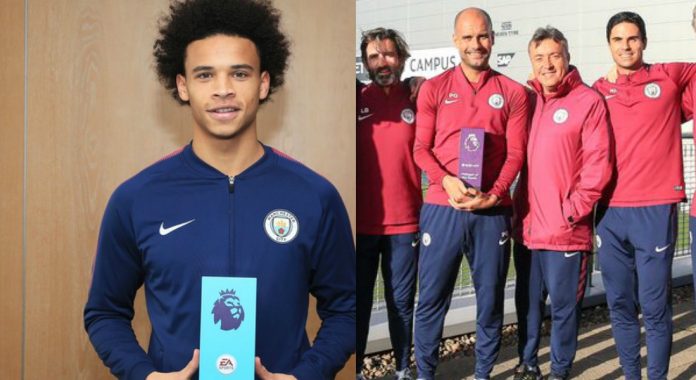 Manchester City’s Leroy Sane and Pep Gaurdiola have won the Premier League Player and Manager of the month awards for October.

Guardiola and Sane clinched the monthly gongs after Man City won all three Premier League games in the month of October – which saw them scoring 13 goals.

Guardiola has beaten off competition from rival managers to win the Manager of the month award second month in a row after unbeaten City’s incredible run of results – winning their last nine league matches to sit top of the Premier League table.

The former Barcelona and Bayern Munich boss has now won the award three times after beating competition from Arsenal’s Arsene Wenger, Burnley’s Sean Dyche and Tottenham’s Mauricio Pochettino, who were also in the run for the monthly gong.

Man City’s Leroy Sane has now won his first Player of the Month award with three goals and three assists to his name in three Premier League appearances in the month of October.

Sane has now become the second German player to win the monthly gong after Tottenham’s Jurgen Klinsmann clinched the very first Player of the month award back in August 1994.

Sane arrived at City from Schalke for a £37m transfer during the summer transfer window of 2016 and since then he has scored 11 goals in 37 Premier League appearances, having scored six of them so far this season

Southampton winger Sofiane Boufal took the Goal of the Month award, following his magnificent individual effort against West Brom, which handed the Saints a 1-0 win at St Mary’s.