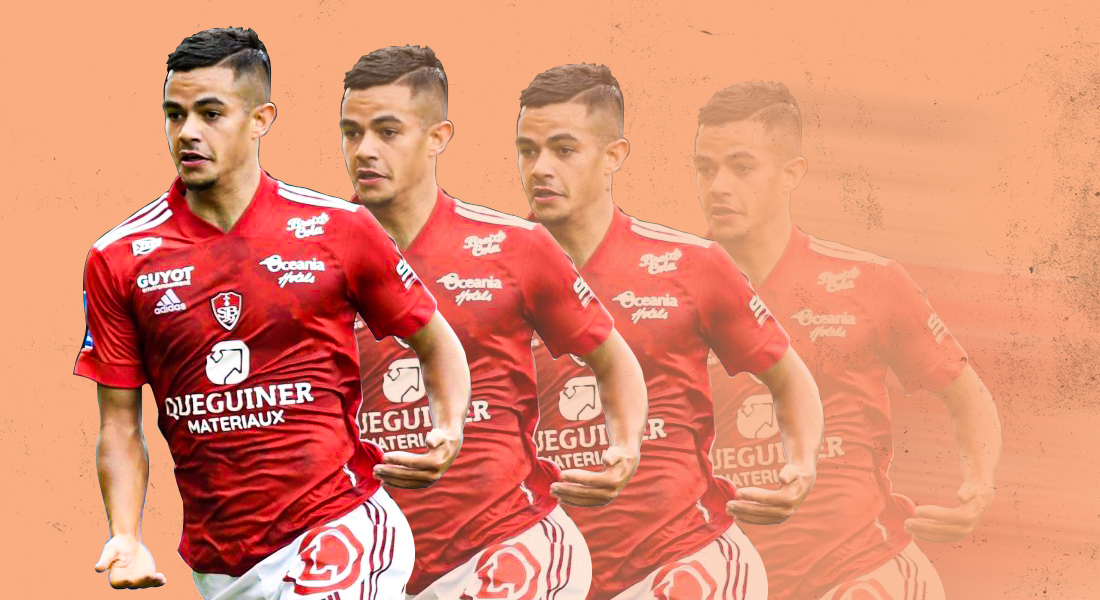 In the cracks and crevices of every top league in the world exist hidden gems who in a matter of matches, weeks, or months quickly rise to the surface. We see it time and time again over the years with players like Marcus Rashford, Erling Håland, and Georginio Wijnaldum bursting onto the scene and shining on some of the world’s biggest stages.

And in this case, Stade Brest 29 winger Romain Faivre might just be one of those players.

Born in the Asnières-sur-Seine region of France, Faivre played his final years of academy football for FC Tours B, eventually signing a professional contract with French top flight outfit AS Monaco in the summer of 2017. Finding it difficult to break into a side with the likes of Bernardo Silva, Kylian Mbappe, and Radamel Falcao, Faivre only managed 4 appearances for
the first team, spending his 3 years at the club with Monaco II in the 4th tier.

93' Faivre with the late equalizer for @SB29 in Lyon!#OLSB29 pic.twitter.com/EojxAlRgjl

His move to Stade Brest has paid dividends however, as he’s playing some of the best football of his career season in the northwest of France. Arguably one of the more consistent performers in Ligue 1 this year, he’s scored 4 goals and provided 3 assists in 18 matches. He’s ranked 5th in the league in key passes per match (2.1), 6th in successful dribbles per match (2.6), and 2nd for possessions won in the final 3rd of the pitch (19). He’s also made an appearance for the French U21 National Team for the first time in his career, scoring on his debut in October.

In order to further understand how Faivre’s qualities make him such an important player for his squad, here’s a breakdown of his main strengths.

Whether it be from a pass, dribble, or a set piece, Faivre has proven that he possesses the ability to provide quality service for his teammates to produce goal-scoring opportunities.

His total of 36 key passes is the 3rd highest in the league behind only Leo Dubois and Memphis Depay, which is a standalone representation of the service he provides.

As for his involvement in buildup plays leading directly to goals, he’s tied for 6th in Ligue 1 with 8 actions. 3 of these came off corner kicks, which he assisted directly.

Without Faivre in the side, it’s hard to see where a bulk of their opportunities would really come from. The winger could’ve had quite a few more assists this season if chances had been converted more effectively, with forwards Steve Mounie and Irvin Cardona missing 12 big scoring chances altogether, 6 of which were produced by Faivre himself. His deliveries from set pieces have also been a crucial part of their offense, which is a good weapon to have in any team’s arsenal.

When you watch him dribble the ball, his style resembles Marseille star Florian Thauvin. They’re similar in stature and weight, both being left-footed players who tend to drive inside with their left foot and cut across the opposition backline. They’re not the fastest runners, but their agile movements and soft touch allow them to evade defenders and get through into dangerous areas effectively.

Apart from being similar on the eye, you could even argue he’s just as good of a dribbler as Florian. Faivre’s 2.6 successful dribbles per match leaves him with a 67.6% dribble success rate, one that’s higher than Thauvin himself, Kylian Mbappe, and even Neymar. He’s also dribbled past 52 players this campaign, only second in the league behind Neymar in first with 55.

His dribbling style is direct and progressive, which is what has made him a danger for opposition defenses. He’s dribbled the ball towards the opposition goal for more yards than any other player in the league with 3,878. To put this into perspective, the next attacking player on the list is Jonathan Bamba, who has almost 900 less progressive yards. This displays Faivre’s
eagerness to get in on goal and attack the backline.

He is direct and dangerous on the ball. With most of his touches coming in the final third, he presents a threat to the opposition defense every time he runs at them. With his ball retention and ability to skip past defenders, Faivre has established himself as a focal point in the team’s offense.

Faivre demonstrates a strong desire to press and win the ball back for his club, having the most total successful presses (90) and the 3rd highest press success rate (34.4%) of any forward player in Ligue 1 this season . Although most of his pressing comes in the middle of the park, he’s 2nd in the league for possessions won in the attacking third of the pitch (19).

Not only is his workrate a plus, but his ability to play in multiple attacking positions makes him a flexible option for his manager. Apart from the striker position, Romain has played matches as a center midfielder, attacking midfielder, and on either flank as a winger.

The tendency to willingly contribute on offense and on the defense is a quality that many managers love to see in their footballers, particularly in forwards. A combination of positional flexibility makes him a more tactically astute footballer would make him a valuable asset to any forward unit.

22 year old Romain Faivre has the potential to be one of the best players in France in the coming years. His goals and assist tallies might not be eye-catching, but they only scratch the surface of what lies beneath. If he continues to remain consistent in his performances, he will surely garner interest from top clubs across Europe in future transfer windows. His technical and tactical presence, his ability to support the attack with quality passing and progressive dribbling, and his effort on the defensive end of the pitch would convince any manager to sign him. He is one for the future, plain and simple.