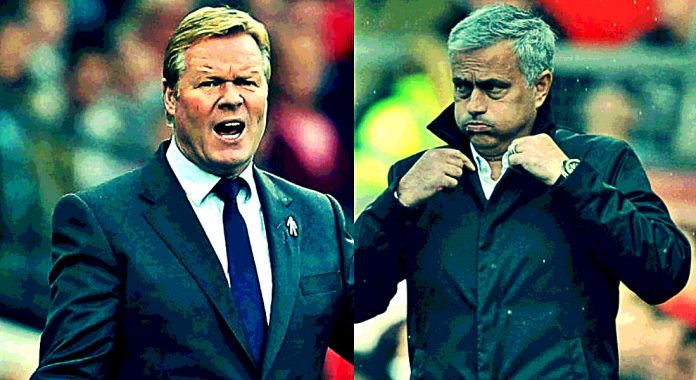 Everton boss Ronald Koeman is fuming at Jose Mourinho for putting pressure on him to finish in the top four.

Manchester United boss Jose Mourinho claimed that Everton should eye a top-four finish in the Premier League this season after spending a staggering £140million.

Everton are now in the drop zone after Man Utd thrashed Ronald Koeman’s side 4-0 at Old Trafford on Sunday.

Sunday’s loss against the Red Devils saw Koeman’s side suffering a fourth successive defeat in all competitions.

Everton spent huge cash to bolster their squad this summer and five of the Toffees’ new signings started in the 4-0 defeat against Mourinho’s United – with another new man Sandro Ramirez coming off the bench in the second half on Sunday.

Koeman’s Everton splurged more than £140m to rope in new players this summer and this led ‘The Special One’ to mention in his programme notes that Everton should aim to register a top-four finish this season.

But such comments did not go down well with Koeman, who pointed out that even Henrikh Mkhitaryan took an entire season to recreate his best form after joining Man Utd from Dortmund last summer.

“Every manager in life has doubts,” Koeman told reporters.

“There is no one who has no doubts in football who is a manager.”

“If you don’t win and you have a big number of players in your squad, you have doubts about the system. But that’s normal.”

“I ask the question of myself. If Mkhitaryan gets one year to adapt to the Premier League, maybe I give my eight players one season to adapt.”

“It was nice because I read the programme of United, and my colleague [Mourinho] talked about Everton and spending £140million and that we need to go for the top four.”

“Sorry, but if there’s anybody who sees something in here [Mourinho’s claim] that is realistic and is possible for this Everton, please come up.”

“Be realistic. Let’s talk at the end of the season. I’m not happy with how we started the season, but please be realistic about Everton.”

“It starts with everybody; fans, press – we need time.”