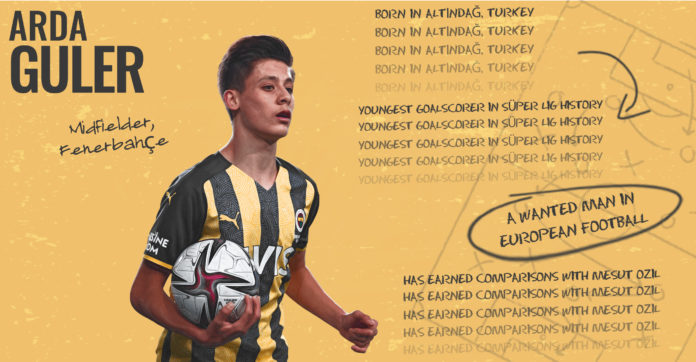 Turkish football is creating a few talented youngsters in recent years and Barcelona know it better than anyone else after they snapped up the signing of Yusuf Demir in 2021.

One of the other names that is getting a lot of praise is Arda Guler. The 17-year-old midfielder is making himself a name in Turkey where he has started playing regularly for Fenerbahce, playing 16 games, scoring three goals and assisting a further four.

At 16 he signed a three-year deal – the most allowed for his age. In Turkey they think Guler will leave before then though, joining one of the biggest sides in Europe. Borussia Dortmund, as well as Barcelona, are also interested in signing the young Turk, but only time will tell where the Fenerbahce academy product lands eventually.

Will Haaland live upto his expectations or will Nunez surprise everyone under Klopp? 🥵#Haaland #Nunez pic.twitter.com/HJaHIO8oXF

Arda was certainly given all the help he needed to become a footballer by his family, and his talents were spotted as early as his second year of primary school, when his physical education teacher suggested he join Genclerbirligi’s academy.

The young lanky Turkish was up against men that were a year older than Arda, but he soon became captain as his supreme talents allowed him to stand out from the rest.

His abilities were spotted by Fenerbahce in 2019 at an Under-14s tournament hosted in Riva, outside of Istanbul, and the offer was soon made for him to join the most successful Turkish club.

The Covid-enforced shutdown of football in the first half of 2020 delayed Arda’s start to life at his new club, but once he was able to showcase his abilities, he was soon promoted from the U17s squad to the U19s.

He enjoyed a superb campaign despite playing against opponents who were up to four years older than him, scoring 10 goals and laying on seven assists in just 22 appearances.

Unsurprisingly, that form caught the eye of first-team coach Vitor Pereira, who invited the youngster to train with the first team after Arda signed his first professional contract in January 2021.

It was not until August, though, that he would make his senior bow, coming off the bench for the final 24 minutes against HJK Helsinki in Europa League qualifying. Three days later, he marked his league debut against Antalyaspor with an assist.

The 17-year-old has already taken the step-up to senior football at his tender age and has registered 3 goals and 3 assists in 12 appearances for Fenerbahce in his breakthrough season. Guler’s rise to the top has not gone unnoticed by clubs across Europe, and the Turkey Under-17 international is going to be the subject of a transfer war between the elite clubs.

Very, very few players can deliver as Guler currently is at 17, let alone in a league as strong as Turkey’s. But the teenager really does look destined for the top – providing he gets the right development.

Liverpool will certainly back themselves to give him that. They’re building quite an incredible next-generation XI, believing they can turn prospects into stars.

Guler might fit right into that, if they can see off competition from Arsenal and Bayern. Though, if the teenager does impress again next season in Super Lig, other major clubs will force themselves into the race.

Arsenal youth coach Erol Tokgözler worked with Guler during his youth career, when he was playing for Gençlerbirliği.

The youngster has since joined Fenerbahce and made his first-team debut, and Tokgözler believes it won’t be long until he leaves Turkey.

“I don’t think Arda will stay in Turkey too long,” Tokgözler said. “I know that there are offers from Arsenal and Bayern Munich.

“With each passing match, the number of these teams will increase. €20-30m for Arda will remain very ordinary.”

Capable of playing in an attacking midfield role or on the wings, Guler has been prolific with the Fenerbahce u19s, and it was inevitable he’d make the step up to first-team football early.

This is a young player tipped for the top. Guler’s teammate Mesut Ozil certainly believes so. “You will be a world star,” he told the teenager, as per Sporx.

Arsenal are always on the lookout for strong young talent, and Guler will obviously have someone to ask about living in London, given he’s teammates with Mesut Özil. But for now, Gunners are the only one reporting – which is no small feat at such tender age.

#ManchesterCity confirm @ErlingHaaland and the @premierleague is officially on notice🙌

He brings goals but it's not so straightforward.
Here's how he fits in at @ManCity👇

An advanced playmaker by nature, who likes to be fielded in a free role, where he can roam the pitch. The Turkish midfielder is very much capable of playing in a deeper role as well. The standout ability, though would be to find space and pick out passes that very few other players can see.

Guler has also great close control and that is shown by his 1v1 dribbling, providing dynamism to his and the team’s final-third play. It doesn’t end here for the Turkish magician. He is an exceptional ball carrier and that proves why he is often called the ‘Turkish Messi’, where he helps push his team forward to produce better chances.

His low centre of gravity means that he is very quick off-the-mark, which also helps aid his off-the-ball movements and orchestrate lethal moves from the deep. Much like prime Ozil and De Bruyne his crosses are pinpoint and unpredictable.

According to Turkish outlet Fanatik, Arsenal had sent scouts to keep an eye on Guler and have reportedly made a concrete offer for the Turkish playmaker.

The report adds that Bayern Munich and Liverpool representatives have also kept tabs, with Guler aiming to build on a tally of three goals and three assists from his first full Super Lig season.

The playmaker – who can feature on the right or in the number 10 role – already has four goals from 10 matches at the Under-17 level for Turkey, and he extended his Fenerbahce contract until 2025 this year.

According to TRT Sport, PSG will be competing for Guler too. The paper says that the Parisians have been negotiating a deal with Fenerbahce for some time.

It is not yet clear how much any of them may have to pay for Guler, nor to what levels they would be willing to go for him. But they would be best advised to strike before his value rises too high, if he is indeed a player capable of reaching a high ceiling.

If they continue to pursue him, it is not yet clear whether they see him as a first-team reinforcement or one for the youth ranks.

But the future looks bright for Guler, so they would not want to miss out. His contract with Fenerbahce runs until 2025 after he signed an extension last month, but they might not be able to keep him forever. A move to the Premier League could beckon in the future, which is why Arsenal and Liverpool are eager to keep tabs on him.