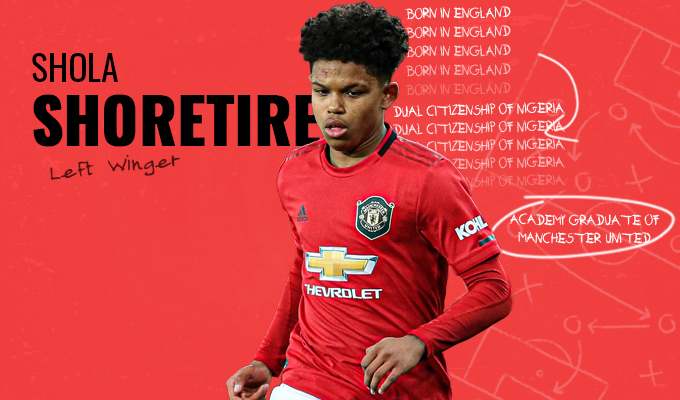 From the Busby Babes to the Class of 92 and their current crop of talent, United players have regularly proved that age is just a number.

The likes of Ryan Giggs and Marcus Rashford were strong swimmers almost from the minute they were thrown in at the deep end, but this doesn’t only apply to the first team.

The forward, who can operate as a winger, a No 10 and also as a centre forward is versatile and you can see the quality in his technique and touches. His work rate this season has improved and he is already being tipped for a big future.

The 17-year-old forward, who has been with United since the age of nine, is another product to have emerged from the club’s Academy system.

Manchester United were hence, rightfully delighted to announce that Shola Shoretire had signed his first professional contract with the club.

Shola Shoretire only turned 17 this month but has since signed his first professional contract with the club and has even been tipped to make his first-team debut this season after being promoted to train with the squad on earlier this week.

The fact he has been playing up an age-group level throughout his time at Old Trafford is the clearest indicator of his talent. This is exemplified by becoming the youngest-ever player to appear in the UEFA Youth League when, in 2018, he came off the bench against Valencia as a 14-year-old. In September too he made his Premier League debut for the Under 23s aged just 16.

The diminutive winger may have looked like a rogue mascot running onto the pitch, but he certainly didn’t seem out of place during his 15-minute cameo.

While a lot of talented teenagers can drift into obscurity after their 15 minutes of fame, Shola Shoretire has continued to make waves in United’s youth teams.

Despite studying for his GCSEs during 2019-20, he also made 13 appearances in the Under-18 Premier League before the season was curtailed.

Most of his peers probably went home from school and played FIFA on the PlayStation, pretending to play at incredible stadiums like Old Trafford, whereas Shoretire made that dream a reality in February 2020, firing United into the semi-final of the FA Youth Cup after scoring against Wigan.

“He was at school today, all day! Then he came over to Old Trafford to play,” Under-18 coach Neil Ryan said after the game. “It’s incredible really. Different day for him compared to other players.

“Good players can enjoy the big stage. He is a really exciting player. He’s evolving and developing, can play a number of different positions, he showed a great maturity I thought.”

It was one of two goals he scored in 14 starts and six appearances off the bench in all competitions, as he played mostly as a wide midfielder, which is the position where he made his Premier League 2 debut for the Under-23s, off the bench, against Leicester City in September 2020, while still only 16.

The England U16 forward is highly regarded by Manchester United and his first professional contract comes days after he scored a hat-trick against Blackburn Rovers for United’s U23s 6-4 win.

For United’s Under 23s this season he has been used as a centre forward, on the left and on the right. His ability to play in all of those roles would mesh seamlessly into Solskjaer’s plans, with the Norwegian keen on having fluidity along his frontline.

His assist for summer signing Facundo Pellestri’s first goal for the club at Under-23 level was nothing but sublime. Receiving the ball just inside his own half, he left three Southampton defenders in his wake with a quality turn before slipping in the Uruguayan to score.

Shola Shoretire, who is also an England U16 international, has been an integral member of Neil Wood’s side this season.

He has featured on 13 occasions in their Premier League 2 campaign, scoring five goals with three assists to his name.

Shola has been playing above his age groups, even before signing as a first-year scholar.

Born on February 2, 2004;  2 days before Facebook launched, Shola Shoretire had only turned 17 this week but he has been earmarked as a future United star.

Before he signed his professional deal he had a plethora of clubs trying to entice him away from the Theatre of Dreams such as European heavyweights Paris Saint-Germain, Barcelona, Bayern Munich and Juventus.

Predominately a winger but he fits in anywhere across the front, and if you need some creativity in behind then Shoretire can do that too having performed well in the No 10 position.

His main qualities are his skillset and his eye for a pass. Despite playing against older and physically bigger players than him, Shola Shoretire is able to evade them with his array of skills on the ball.

This is aided by his low centre of gravity and the fact that he is comfortable with both feet – meaning he can easily unbalance the opposition.

Neil Wood, under-23s manager: “With Shola what impresses me the most is that he’s a very good technical player, and Shola has always played up a year throughout his whole academy life, I can’t remember him ever playing in his own age group.

“Whatever you ask him to do on and off the ball he’s going to do it and you can trust him to do that job. He’s doing excellent for the age of him.

“He was at school today, all day! Then he came over to Old Trafford to play,” Under-18 coach Neil Ryan said after the game. “It’s incredible really. Different day for him compared to other players.

“Good players can enjoy the big stage. He is a really exciting player. He’s evolving and developing, can play a number of different positions, he showed a great maturity I thought.”

“I’m not expecting him to be the man of the match and be the main figure of the team because he’s so young, but he’s not going on that pitch and drowning or anything he’s probably been one of our most consistent outstanding performers throughout the season.”

“Shola has always played up a year through his whole academy career,” Wood said in December 2020. “I can’t remember him ever playing his own age group. He has always been stretched.

“He is very mature for his age, the way he plays, he does a lot of work, takes a lot of positions up, and he has played a lot of roles. He’s played [number] nine, he’s played left, he’s played on the right, he’s played 10 and whatever you ask him to do – on and off the ball – he is going to do it. You can trust him to do that job.

“He is very young and doing excellent for the age of him. I am not expecting him to be man of the match or [a] main figure of the team, because he is so young, but he’s not going on that pitch and drowning or anything. He has probably been one of our most consistent outstanding performers throughout the season.”

The impact below the first-team has clearly caught the eye of manager Ole Gunnar Solskjaer who has rewarded him with a place in their training squad.

Solskjaer brought Shoretire into first-team training earlier this week and he will remain there while he continues to improve, while he was also occasionally included in the first-team matchday squad.

Solskjaer closely watches the progress of those in the U23s and there is regular dialogue between the Norwegian and Neil Wood and Nicky Butt, who oversee the youngsters.

Shoretire was first promoted to first-team training over Christmas while the academy players were given some time off and Solskjaer continues to be impressed with what he has seen from the 17-year-old, and has moved him into their bubble ahead of the FA Cup clash against West Ham.

Despite only being 16 years old at the start of the season, Shoretire was promoted to Neil Wood’s Under-23s squad ahead of 2020-21.

The Nigerian-born starlet has taken to his new surroundings like a duck to water, scoring five goals and registering three assists in his first 13 appearances.

Having previously said that his inspiration is Barcelona legend Ronaldinho, it’s no surprise that the winger is an absolute joy to watch.

With a low centre of gravity and incredible dribbling ability that often leaves defenders with twisted blood, it’s easy to see why he’s so highly rated.

Shoretire is also comfortable with both feet and has a wide range of skills in his locker, drawing comparisons with former Bolton entertainer Jay-Jay Okocha.

Manchester United believe that Shola Shoretire is the new Jadon Sancho and consider him as a potential alternative to the Borussia Dortmund winger.

‘He was so confident in himself, he was skilful and had everything,’ he told UMM’s YouTube channel- while speaking about his idol Ronaldinho

‘If you’re not having fun on a pitch then there’s no point. I’m always going into a game thinking I’m going to do well.’

It wasn’t just that legendary No 10 who Shoretire looks up to as he cited United’s Marcus Rashford as another role model.

‘The things that he does on the pitch and off the pitch; He’s a good role model,’ he said of the Red Devils academy graduate.

‘Seeing him do that, it makes me think I can do that too.’

It might be a little while until he’s scoring incredible goals like this for the first team, but then again we wouldn’t put anything past him judging by the evidence so far.