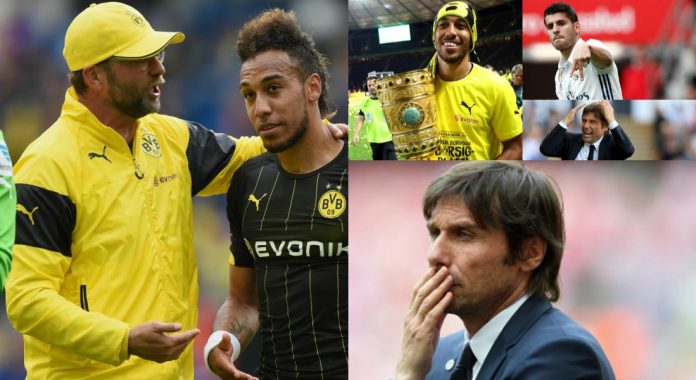 Liverpool and Chelsea are at loggerheads to rope in Borussia Dortmund striker Pierre Emerick Aubameyang.

And now Liverpool have joined Chelsea in the race to sign the Gabon hit-man.

FootTheBall sources reveal that both the Premier League clubs have now held talks with Aubameyang’s representatives over a proposed £65million switch.

Jurgen Klopp shares a good bond with the Gabon striker as he had mentored him during his incredible managerial stint at Dortmund.

The German manager is very fond of Aubameyang and has been pushing to be re-united with the 28-year-old striker over the course of the last few months.

And it is believed that Liverpool are in pole position to secure the signatures of the talented striker as the Reds hierarchy believe that Klopp can convince Aubameyang to snub Chelsea and join him at Anfield.

However, the Reds owners Fenway Sports Group are not willing to match the £65million asking price or the player’s wage demand of £180,000-a-week.

This gives Chelsea a chance to hijack the Gabon striker from under the noses of Liverpool, even though the Blues hierarchy have informed Antonio Conte that the club will not splurge cash for a new striker until Diego Costa’s future is decided.

The Spanish striker had made attempts to make peace with Conte, but the Italian has made it clear that he does not want to keep Costa at Chelsea for the upcoming season.

The Blues bosses have given the Spaniard a week off from training to secure his expected move to Atletico Madrid.

And the Premier League champions wants to sell or loan him out before breaking the bank for signing a new striker.

But to do this, the Blues risk missing out on Aubameyang, who displayed incredible form last season – with 40 goals to his name in Bundesliga.

Chelsea are plotting a £62m bid for Morata, but the Spanish striker has travelled with the Real Madrid squad for their pre-season campaign at the United States.

Sources also reveal that Zidane wants to retain the 24-year-old talented striker although the player has made it clear that he wants to leave due to lack of game time – but the Real hierarchy will not sell him cheap.

It seems that after losing out on Romelu Lukaku, the Blues might also fail to land Morata at Stamford Bridge.

Meanwhile, Premier League champions Chelsea have finally agreed in principle with AS Monaco over a £40m transfer fee for signing Tiemoue Bakayoko.

The French midfielder will now arrive in London to complete a medical today ahead of his move to Chelsea.