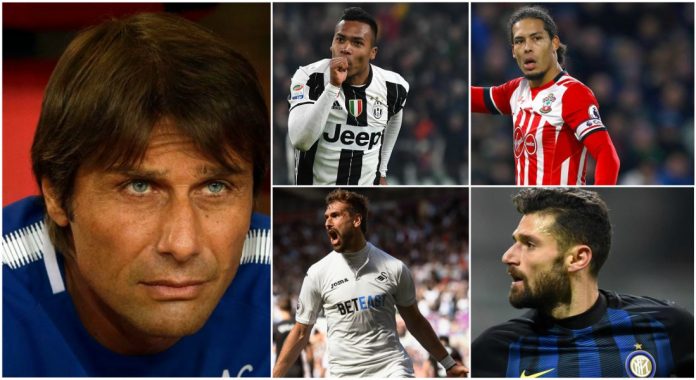 Chelsea boss Antonio Conte wants to sign four more players in a bid to challenge for all four trophies this season.

The Italian is set to break the record for a single transfer window – having already splurged £140million this summer.

Conte has identified Brazilian left-back Sandro, 26, as his top target. Van Dijk was heavily linked with a move to Liverpool last month.

But the Reds had to drop their interest in the Dutch defender after Southampton threatened them of FIFA action claiming they had illegally approached the 26-year-old player.

And now the Dutchman is desperate to quit Southampton this summer and Conte is eyeing to capitalise upon the opportunity as he wants to add more reinforcements to an already rock-solid Chelsea defence.

Chelsea are all geared up to surpass Man City’s record £217.8m spending this summer, although the Etihad bosses may end up splurging more cash as they are eying to sign Gunners contract rebel Alexis Sanchez.

Conte has already roped in £65m Real Madrid star Alvaro Morata, Antonio Rudiger from Roma for £34.2m, Tiemoue Bakayoko in a £40m deal from Monaco and Willy Caballero on a free from Man City.

But Conte wants Chelsea to sign more players as they return to Champions League this season.

He said: “We will put ourselves fully into all four competitions next season.”

“We have one competition extra — but are working very hard to improve the team.”

“To be in Europe next season is great for the club and the players are enthusiastic, so we must prepare in the right way.”

Conte’s men are set to lock horns with Bundesliga giants Bayern Munich in a pre-season friendly clash today before playing against Serie A side Inter Milan at the weekend.

And Bayern boss Carlo Ancelotti accentuated that his former club will be a force next season in Europe.

He said: “Their team is better. Last year was fantastic for them. Antonio changed the mentality of the team and style of play.”