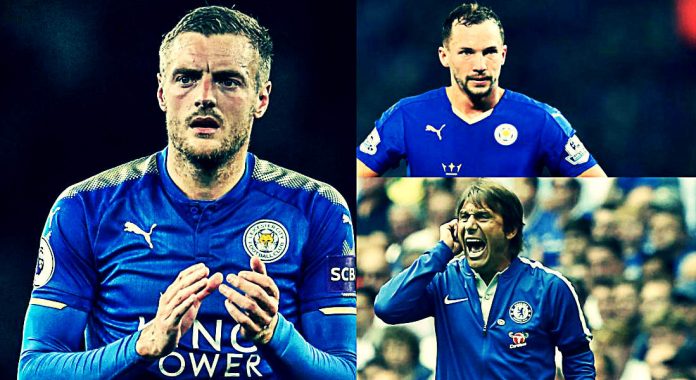 Chelsea could rope in Leicester City duo Jamie Vardy and Danny Drinkwater, according to reports.

Blues boss Antonio Conte wants to defend the Premier League title and is now desperate to add more reinforcements to his Chelsea squad before the summer transfer window closes on August 31.

Chelsea looked positive after a 2-1 win over London rivals Tottenham last week but a 3-2 defeat against Burnley in their league opener has forced Conte to search the market for more players, whom he can land at Stamford Bridge to bolster the Blues squad – with Champions League knocking at the door.

And now Conte has identified Leicester stars Jamie Vardy and Drinkwater as his top targets.

According to the Daily Mirror, Chelsea are now a planning a double raid for the Leicester duo as Conte wants to strengthen the squad – to make them capable of fighting for a Premier League title defence and as well as the Champions League campaign.

Conte is still not happy with Michy Batshuayi’s performance up-front and with Diego Costa’s transfer situation in limbo – the Blues are now plotting a shock bid for Foxes star Jamie Vardy.

Only time will tell how much Chelsea are willing to spend for landing Vardy at Stamford Bridge – but they need to act fast as the transfer window closes at the end of this month.

Vardy had snubbed a move to Arsenal last summer and signed a new £100,000-a-week contract at the King Power Stadium.

However, a chance to win the Premier League title again and playing Champions League football could convince the England striker to make a move to Satmford Bridge.

Whether they can persuade the 2016 title winners to allow their talisman to leave remains to be seen.

Chelsea are closing in on a £30m deal to sign Vardy’s team-mate Drinkwater, reports the Mirror.

Earlier reports have claimed that Leicester have rejected a £15m bid from Chelsea as they value Drinkwater at £40m.

However, Chelsea are hoping that the Foxes would lower the asking price for Drinkwater, who wants to leave the club this summer.

Drinkwater and Vardy and played in both of Leicester’s Premier League games so far and are now set to face Manchester United at Old Trafford on Saturday.