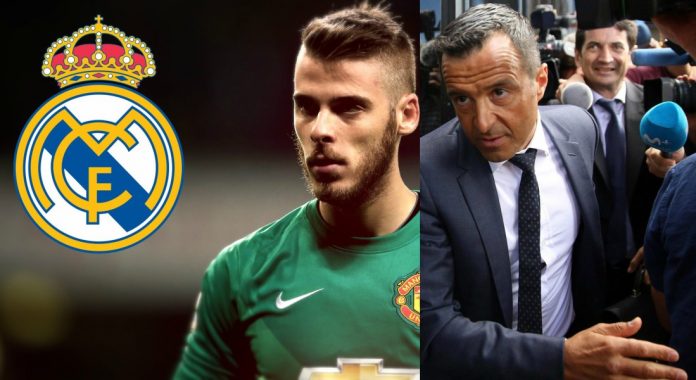 David De Gea has made up his mind and wants to join Real Madrid this summer.

According to reports in Spain, La Liga and Champions League double winners Real Madrid are ready to splurge £50million to rope in the Manchester United goalkeeper.

Earlier this year Man Utd had warned the Real bosses that De Gea is not for sale, but recent reports in Spain claim that the La Liga giants wont bow down as they are ready to pay £50million to lure away de De Gea to the Spanish capital.

FootTheBall sources reveal that the La Liga champions are willing to offer the Spaniard a huge pay-hike than what he currently earns in Manchester United.

Spanish transfer outlet Don Balon have claimed that Real Madrid will leave no stone unturned as the club president Florentino Perez is desperate to sign the 26-year goalkeeper this summer.

Meanwhile, De Gea has told his agent Jorge Mendes that he wants to leave Manchester United to join Real Madrid this summer and has also ordered him to get the deal done as soon as possible, according to reports.

Sources also reveal that Real Madrid are planning to sell their current first-choice goalkeeper keeper Keylor Navas to Paris Saint-Germain, if they manage to land De Gea at the Santiago Bernabeu this summer.

However, Man Utd have made it clear that De Gea is not for sale.

And Mourinho recently admitted that he wants to keep the 26-year-old shot-stopper at Old Trafford.

But Mourinho also have Argentina No 1 Sergio Romero and Portugal’s keeper Joel Pereira in the squad.

It is believed that if De Gea forces a move away to the Spanish capital, the Red Devils will look out for Atletico Madrid’s Jan Oblak as a potential replacement for the Spaniard.