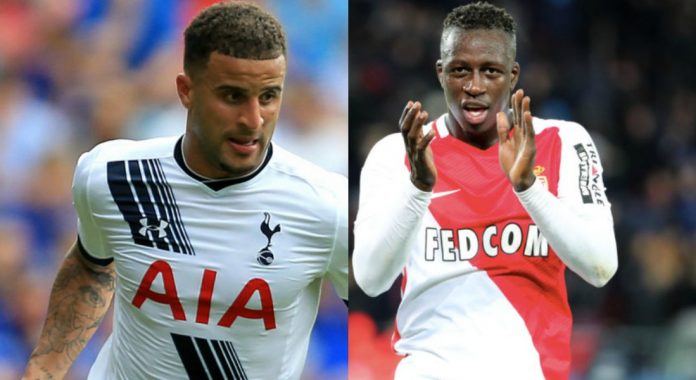 Manchester City and Tottenham Hotspur have agreed a transfer fee for Kyle Walker.

The City bosses are also confident of roping in Monaco left-back Benjamin Mendy as Pep Guardiola looks to bolster his squad before the start of the upcoming season.

Man City have been monitoring the availability of Walker and have had agreed personal terms with the English defender.

Guradiola is confident of securing the services of Walker and the City bosses have made several attempts to finalise a deal – and have finally agreed in principle with Spurs over a £50m transfer fee for Walker.

Sources reveal that the deal is set to finalised before Guardiola takes his City squad to the United States on a pre-season tour on Monday.

Earlier, FootTheBall had reported that missing out on Alves had dealt the Blues a major blow in their Walker pursuit as Spurs understood that they were in the driving seat as negotiations over a transfer fee for the English defender was still on.

Man City have agreed personal terms with Walker but the Spur bosses were not willing to sell him cheap.

Spurs chairman made it clear that they would hold out for a staggering transfer fee of £50m for Walker, after Guardiola missed out on Dani Alves.

And now sources reveal that Man City have agreed to match the asking price and have wrapped up the deal with Spurs on Thursday morning.

Man City were willing to pay under £45m but now they have agreed to splurge the extra cash, so as not to miss out on another right-back target this summer.

It is understood that Man City are desperate to rope in reinforcements at full-back positions before they jet-off to the United States on Monday.

Monaco made it clear that they are holding out for a £40m offer for Mendy. The City bosses have pushed hard to lower down the asking price, but after failing to reach a conclusion, they are now ready to match the price – as they have done with Walker to get the deal done as soon as possible.