Economics behind The Transfer Window 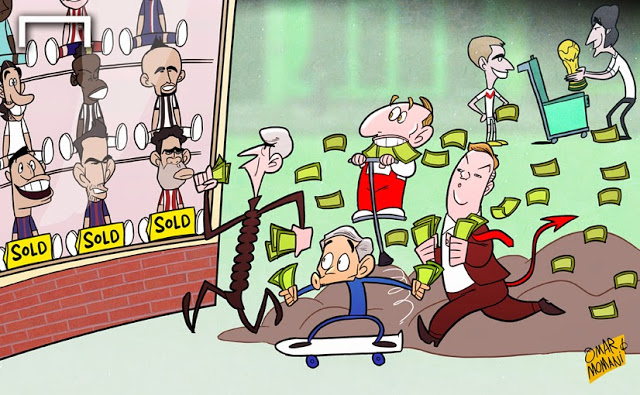 As seasons go by, the champions change, styles change, managers and players too!

The only constant amid all the chaos is the Economics behind the Transfer Window.

Every transfer windows surprises (or sometimes shocks) us with unexpected transfers at unbelievable prices. What we often tend to overlook is the economics behind the same.

Like any other Market, the Player Transfer Market too works on the simple economic principle where the forces of demand & supply drive the price. As simple as it sounds, there are a plenty of other factors that play a role in this price determination exercise. While some transfers are exceptional and involve Arab money & Neymar Jr, majority of the rest can be explained through a brief analysis of the following factors.

While watching a player to ascertain his capabilities is very important, one should not forget that – numbers never lie.

A player’s talent can be judged quite accurately via his statistical records.

Goals for an attacker, assists for a midfielder, clearances for a defender & clean sheets for a keeper speak a lot in themselves.

Past statistics help determine what to expect from a player.

Players with better numbers are thus highly valued while players with unfavourable statistics are seldom demanded and generally priced lower.

A clear instance for the same is the following graph depicting the transfer price of Zlatan Ibrahimovic varying with his goal ratio at different clubs. 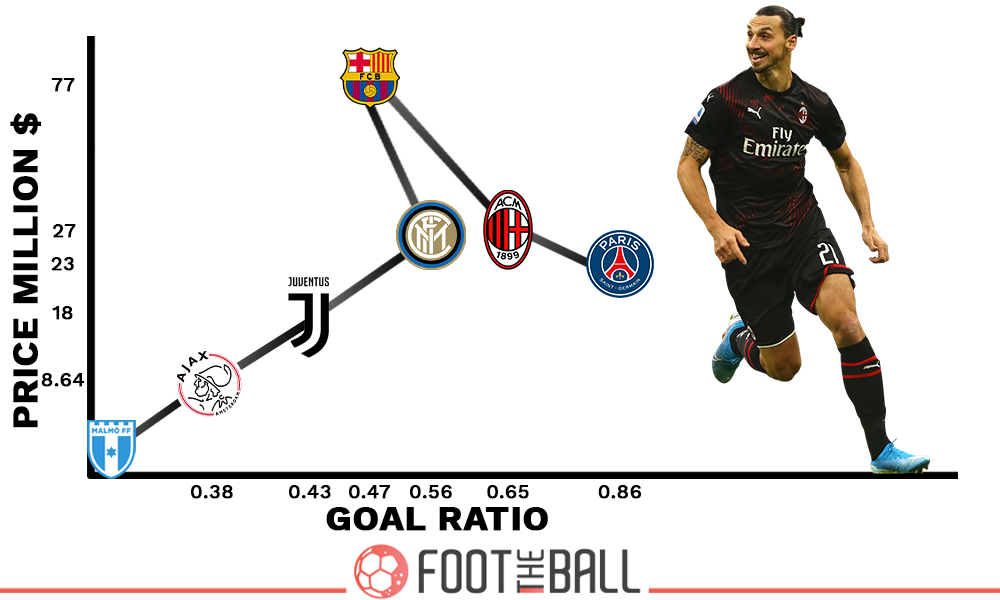 2. RECENT PERFORMANCE OF THE PLAYER

There’s no factor more important than a player’s performance and form in his current team. It is the main driving factor that catches attention and plays a vital part in luring managers.

Players who have been performing well lately tend to have a higher value in the transfer market.

It is for a fact that the overall career of a player & performance over the years is more important, however that may not always be the case while considering transfer fees.

The following price table supports the claim that recent performances play a vital role and matter even more than overall performances.

The Ajax underdog performance gives us an example for the same where youngsters Frenkie De Jong & Matthijs DeLigt were sold for €75 million each, just because of having that one break-through season.

Same was the case with 19-year-old Joao Felix. The Portuguese youngster came into the limelight during his UCL performance for Benfica and was later bought by Atletico Madrid for €126 million.

Though the above-mentioned players may not actually be worth the massive sums being paid for them, but that is the impact of recent performances on determining transfer prices.

A similar instance is the player from the AS Monaco squad being sold at startling high prices after their 2017 UCL success. 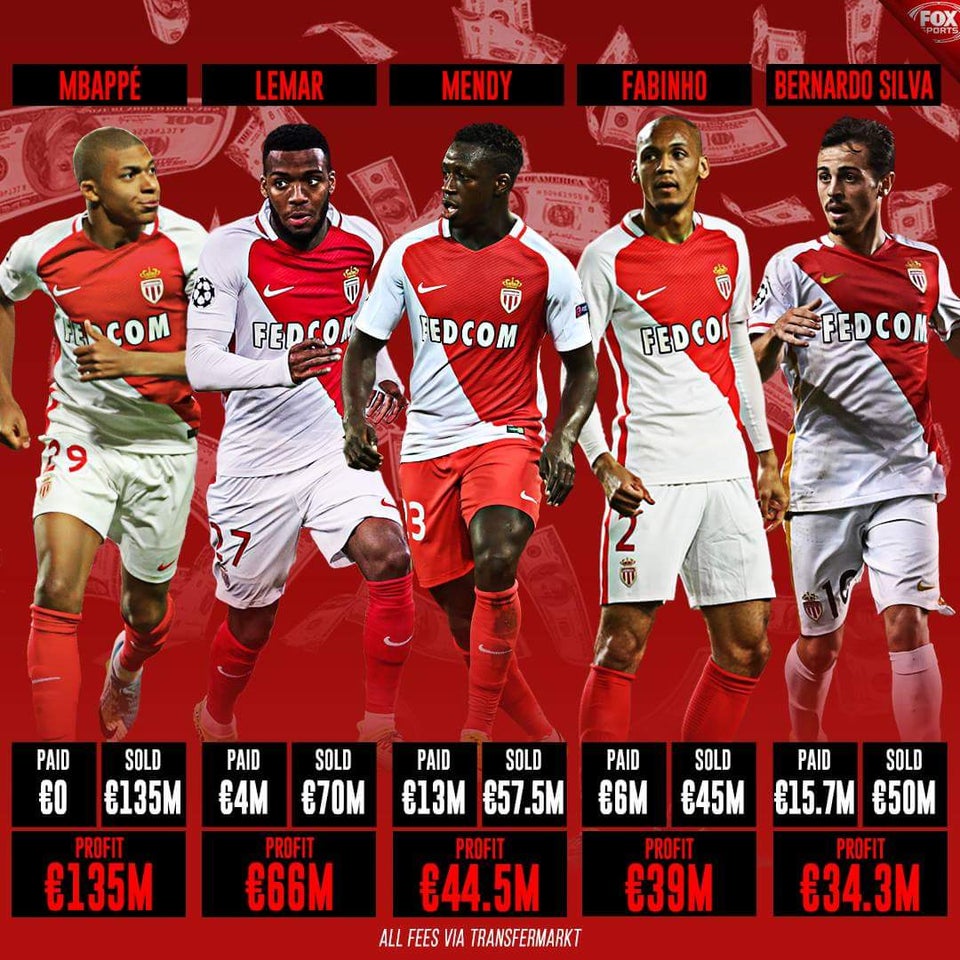 The age of a player and his price in transfer market are inversely related – greater the age, lower is the price.

This is the case with all sports persons across all fields. 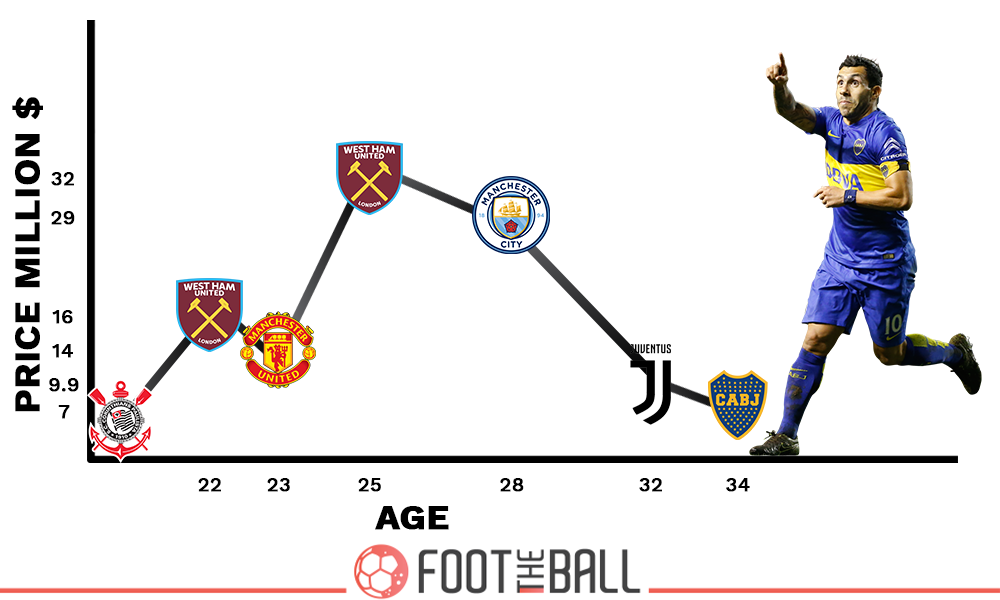 As ‘Flamboyant’ and unimportant as it sounds, this factor actually plays a huge role in determining transfer prices.

Players with a higher popularity among the masses are valued more than others. The reason being that these players drive a huge fanbase & can help improve revenue generation and market standings of the club they sign for. Their image rights and ‘Iconic Status’ also add to the expansion prospect for the club signing them.

As startling as it sounds, after the transfer in 2018, Juventus was able to recover Cristiano Ronaldo’s entire transfer fee (of a whopping 100 million Euros!) by sale of Ronaldo jerseys in the first season alone!

This is the ‘Fanbase’ effect!

Apart from just the monetary gains in terms of share price & revenue, signing ‘Big Names’ also helps clubs and leagues expand. So was the case with LA Galaxy signing Zlatan & Dallas Cowboys bringing in Wayne Rooney in the MLS. 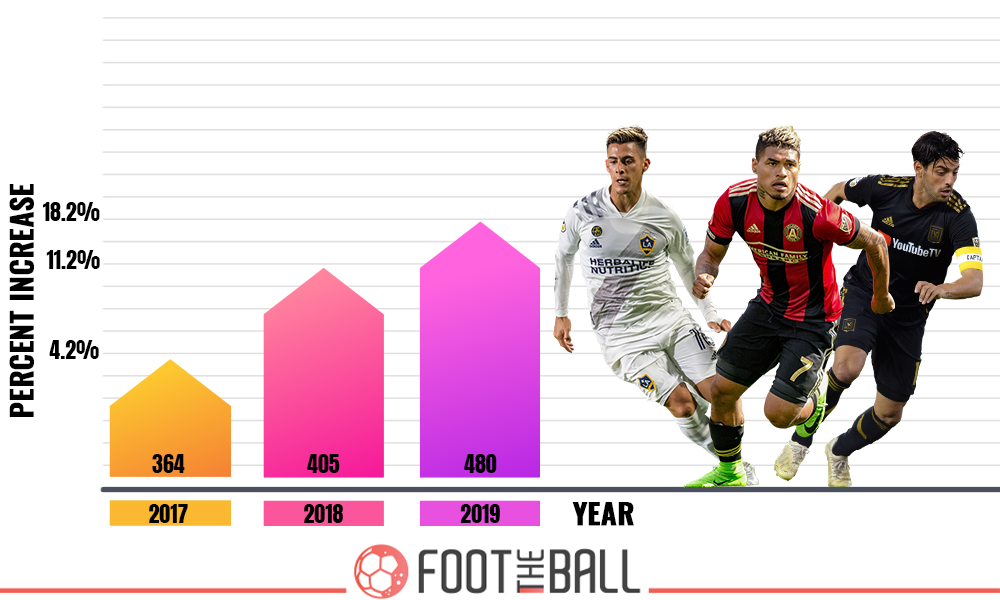 5. DETAILS OF THE PREVIOUS CLUB

Even though the price being paid is for the player, it is the clubs who negotiate the deal. The following characteristics of the player’s current club thus play a huge role:

Popularity of the club:

The more ‘Well-Known’ a club is, the higher is the transfer fee it demands. The reason for the same being that playing for a ‘Popular’ club tends to have a direct positive impact on the image and worth of the player.

The best instance for this is Philippe Coutinho!

The Brazilian was bought by Liverpool for a mere amount of €13 million and was sold to Barcelona after 4 seasons for €145 million (With the ex-Liverpool player tag!).

Location of the club

Clubs based in countries the major Footballing nations tend to charge a higher fee for their players. An instance for the same is Harry Maguire costing $97 million while Alphonso Davies costing only $15 million!

For the sole reason that Maguire was an Englishman playing the Premier League in Leicester while Davies, the Canadian fullback played in the MLS in USA.

League & Division of the club

Clubs playing in more competitive & better ranked leagues demand more money for their players. On the other hand, clubs that compete in lower divisions or lesser-known leagues let go of even their best players at relatively lower prices.

Instance for the same is the signing of the Lightning-Liverpool fullback Andrew Robertson. Despite his impeccable talent, his transfer fee was mere £8 million in 2017 as his club Hull-City had been relegated from the Premier League.

Such situations often leave the clubs helpless, when the star players themselves demand departure.

Higher the release clause leads to a higher transfer fee (For that is the purpose to have a high Clause – To drive away prospective buyers!).

Length of the contract also matters.

An instance for the same is Leroy Sane.

The German youngster made a move to Bayern right before his contract with Manchester City expired in 2021. £54.8 million pounds for the lethal attacker was a steal deal for the giants and is undoubtedly the best transfer of 2020 yet!

The following is a list of players with the highest release clauses. 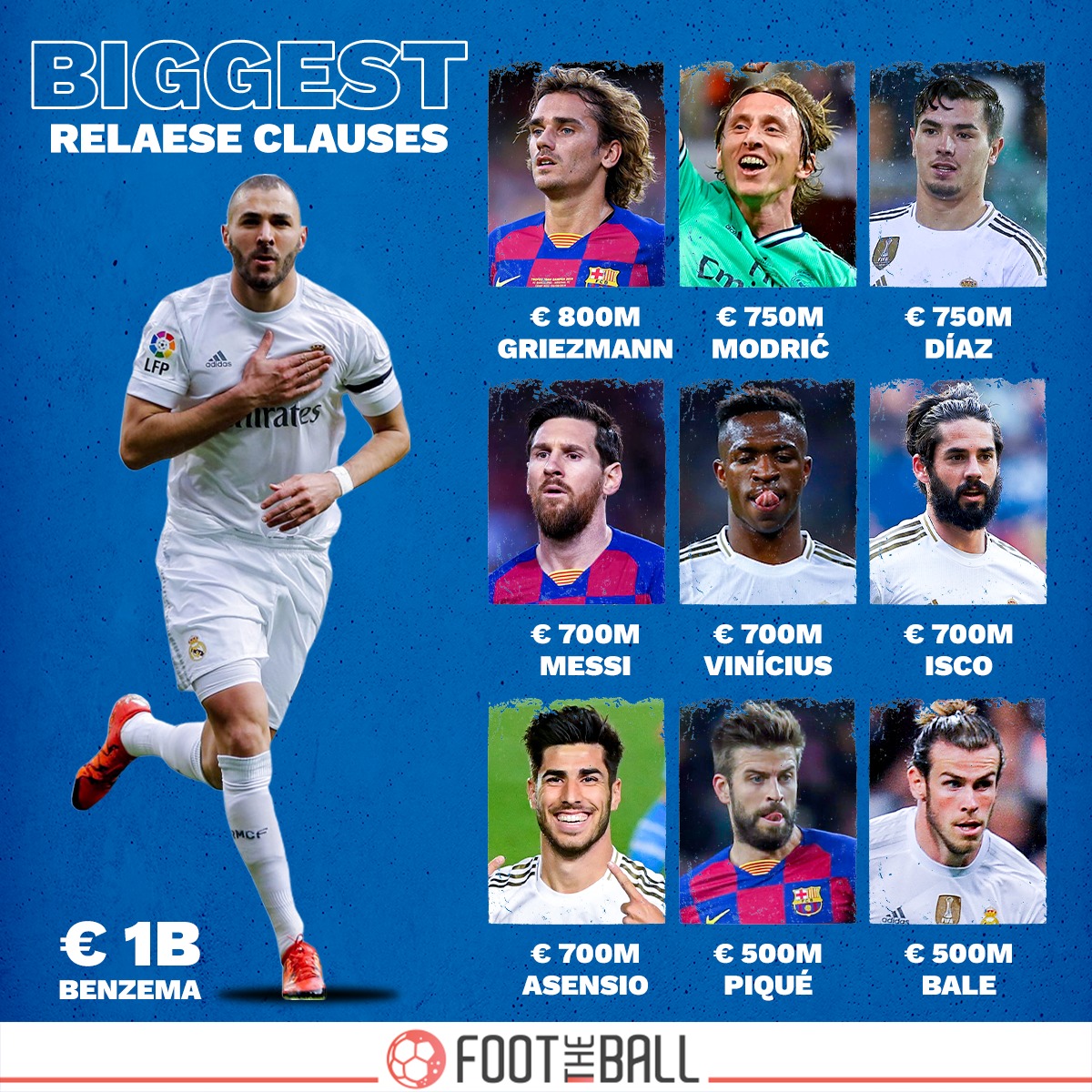 7. INTERNATIONAL PERFORMANCE OF THE PLAYER

While clubs seem to be the only stage for footballers, one should not forget the role of International tournaments.

Very often, clubs discover & sign players based on their performance on the international stage. This is an important platform for it shows a player’s ability to perform under pressure and to adapt to the team. There are several players who shone with their national teams first.

This would include James Rodriguez in 2014. The Colombian played for AS Monaco and came into the limelight only during the 2014 World cup. He was the top scorer with 6 goals and was soon signed by Spanish giants Real Madrid.

Another recent example is Benjamin Pavard. The 2018 World Cup was a display of the Frenchman’s flawless defending and ability to blend with the game. Without wasting any more time Bayern Munich immediately signed the 24-year-old from his then relegated team – VFB Stuttgart. 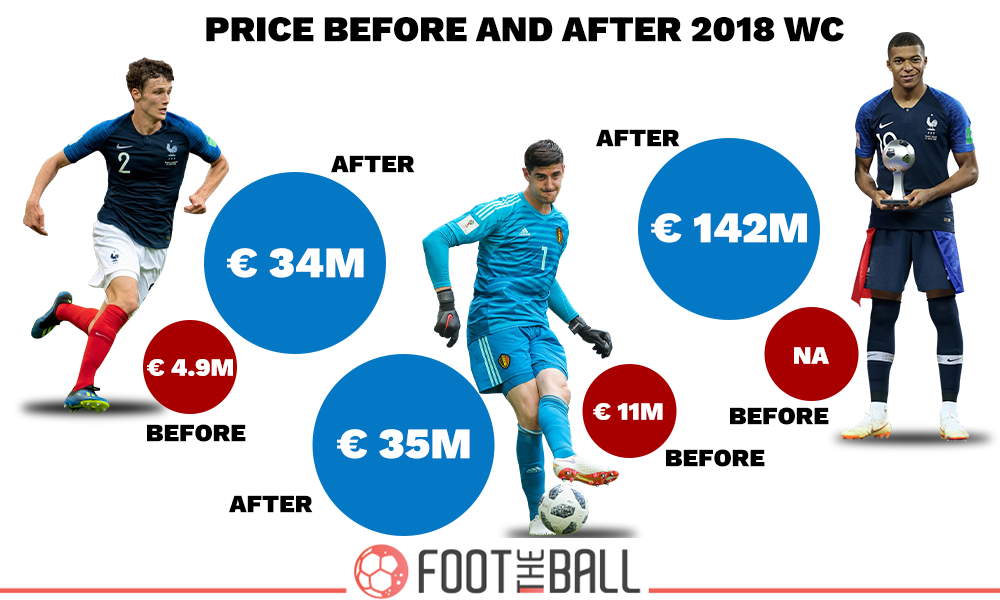 While all clubs value talent, inconsistent & injury prone players is what they steer clear of.

Players who do not play regularly may not be valued at their true potential for the sole reason that they lack on-field experience & are inconsistent. This adversely impacts the transfer price.

To understand with an example, let’s consider James Rodrigues again. The Columbian talisman could never live up to his full potential for he was not given sufficient playtime at Real Madrid. His transfer fee in turn dropped to €50.00 million. In spite of the low fees however, Bayern did not sign the player, but loaned him from Real Madrid for 2017-18.

Apart from Play-time another factor that has a similar impact is injuries. Players susceptible to injuries are more of a liability than asset to the club and are thus valued lowly. The perfect example is Gareth Bale. The Welsh despite an impressive record is struggling to find a spot in the starting eleven and has yet not taken a transfer, for clubs are not willing to spend so much on an injury-prone footballer.

9. POSITION ON THE FIELD

Though all players have an equal role on the pitch, statistics indicate that attackers and midfielders are more expensive than defenders.

Even the best of the best defenders are valued less than the attackers. The record transfer fee for a defender is $97 million while that for an attacker is $267 million!

The difference is more than double and shocking!

Further, among attacking players, Attacking Midfielders are valued the highest for the simple reason – VERSATILITY!

A good CAM can play as a CM, winger or even false 9 or striker for that instance. An example of such a player is Phillippe Coutinho or Neymar Jr. 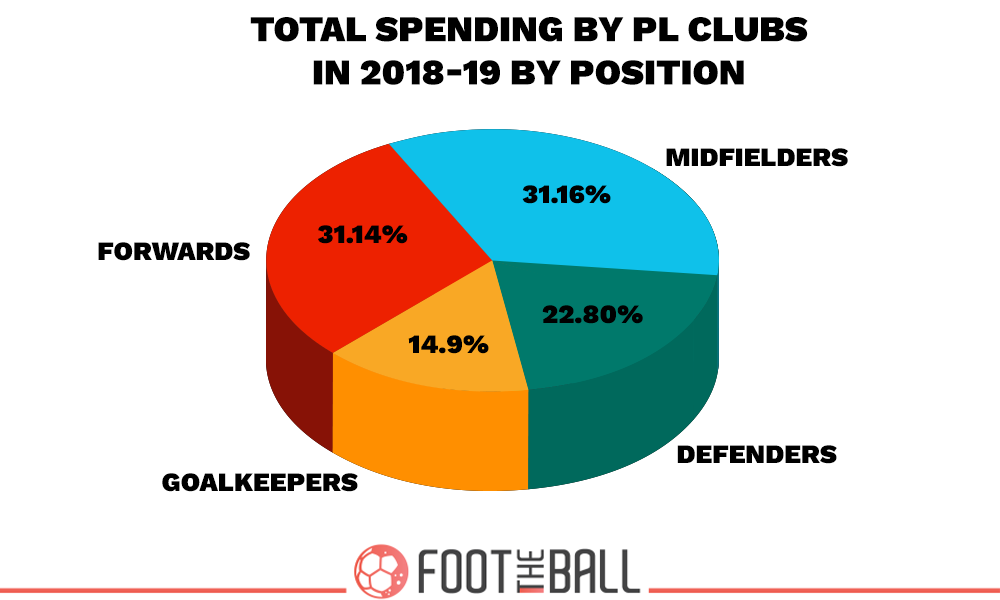 Although a walk through these factors does make us feel like a Pro, however, it is essential that one remembers that the Transfer market is as dynamic as any economic market.

No amount of principles and statistics can thus predict what awaits us in the coming future.

But this unpredictability; this excitement; this never-ending possibility of even the impossible happening is right where the true beauty of game lies!