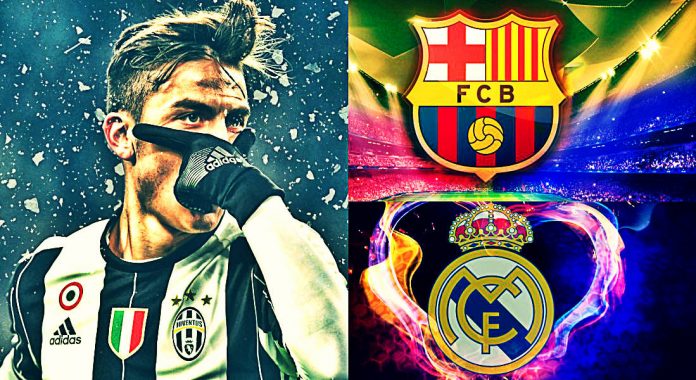 La Liga rivals Barcelona and Real Madrid are at loggerheads to sign Paulo Dybala from Juventus.

And Mundo Deportivo claims that both Barcelona and Real Madrid are ready to break the bank to sign the Argentine star.

Barcelona are desperate to sign a replacement for Neymar and have already launched bids for Liverpool star Philippe Coutinho and Borussia Dortmund youngster Ousmane Dembele.

But Dybala is also on the radar after displaying incredible form against Barca last term when he netted a brace in Juventus’ 3-0 Champions League victory.

But the Catalan giants are set to face competition from Real Madrid, who are willing to offer £77m plus midfielder Mateo Kovacic to Juventus in order to land Dybala.

The La Liga champions are also heavily linked with Monaco teenage sensation Kylian Mbappe, and reports have claimed that the Los Blancos are closing in on a £161m deal for the French striker.

Reports have also claimed that Zidane would be willing to sell Gareth Bale if they can rope in a replacement. Manchester United boss Jose Mourinho said on Monday that he ‘will fight other coaches’ to land Bale at Old Trafford.

The Red Devils have had been linked with Bale since 2011 and this time around they are growing confident that the Welshman may leave the Bernabeu.