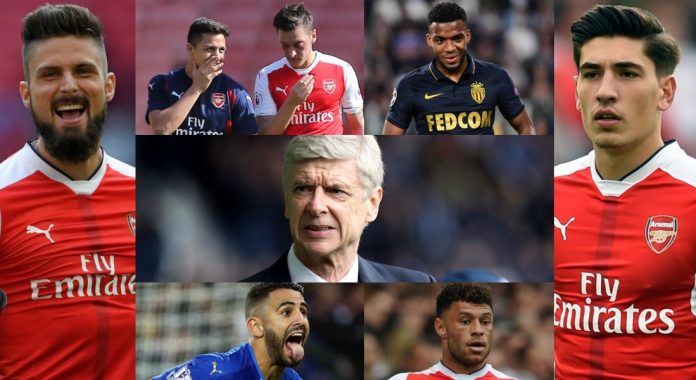 Arsenal have now broken their club transfer record to rope in Lyon striker Alexandre Lacazette on Tuesday night – and will continue their summer spending spree as Arsene Wenger is desperate to bolster his squad to challenge for the title in the upcoming season.

Arsenal boss Wenger has landed a top-striker but has a lot left to work on this summer.

Lacazette arrived at Arsenal’s training ground and has completed his medical ahead of a £52m move from Lyon.

The French striker has agreed a five year contract with the Gunners and is expected to take home a wage packet of £200,000-a-week.

And now Wenger is all set to launch another tempting bid for AS Monaco winger Thomas Lemar, and has also identified Leicester City hero Riyad Mahrez as a back-up option.

FootTheBall had earlier reported that Arsenal had seen a €35 million (£30.7m) bid for AS Monaco winger Thomas Lemar turned down by the Ligue 1 champions.

The Gunners hierarchy are desperate to secure the signatures of Thomas Lemar from Monaco if contract rebel Alexis Sanchez leaves this summer.

Ligue 1 champions AS Monaco, who have already offloaded Bernardo Silva to Manchester City. Tiemoue Bakayoko is on the brink of joining Chelsea and is due to complete a medical at Stamford Bridge by the end of this week. Manchester City are also confident of luring away full-back Benjamin Mendy to the Etihad this summer.

And at such a juncture, Ligue 1 champions AS Monaco do not want to sell too many of their stars this summer and has slapped a staggering £80m for Lemar.

The Gunners hierarchy are confident that they land  the French winger at the Emirates, but FootTheBall understands that Monaco are not willing to sell and a deal would not be possible unless a compromise can be reached.

This could see the Gunners shifting their attention to Mahrez, who is keen on moving to Arsenal and sources reveal that Leicester are ready to listen to offers but no official bid has been launched yet.

Arsenal have now given up their chase for Monaco teenage sensation Kylian Mbappe after the arrival of Lacazette and they now hope that Monaco would soften their stance on Lemar.

However, Arsenal are now waiting to sort out the futures of Alexis Sanchez, Ozil, Alex Oxlade-Chamberlain and Olivier Giroud.

It is now believed that Sanchez is keen on making a move to Manchester City after rejecting a £275,000-a-week new deal at the Emirates.

Mesut Ozil is planning to join Arsenal on their pre-season tour but there are doubts about his future. He is also out of contract next year, with Arsenal currently unable to reach agreement with him and his advisors on an increased salary.

Ozil, though, remains less likely to leave than Sanchez and may simply be happy to enter the final year of his contract. That would indirectly increase the pressure on Arsenal to sell Sanchez rather losing the Chilean for nothing next season even if he wants to join another Premier league club.

There is also there is uncertainty over the futures of both Olivier Giroud and Hector Bellerin.

Barcelona also still want Bellerin while Giroud has been heavily linked with a move to Everton, and is also under the radar of West Ham United and Marseille, and wants reassurances about his first-team future.

Bellerin has made it clear to boss Wenger that he wants to move back to Barcelona but the French manager is not willing to part ways with the defender and is set to hold showdown talks with the Spaniard.

Giroud appears most likely to leave following Lacazette’s arrival although Wenger does want to retain his option as a more physically imposing style of striker.

Like Fabregas, Bellerin began his career at Barcelona and the emotional pull of his home club is likely to be considerable although he is under contract to Arsenal until 2023.