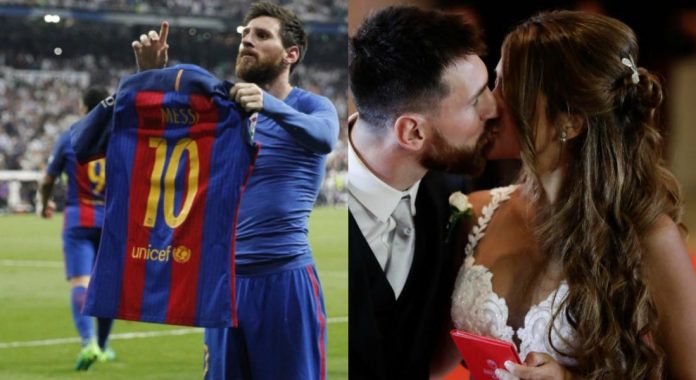 Argentine legend Lionel Messi has agreed to sign a new bumper Barcelona contract that will keep him at the club for four more years – with an additional option of one more year, according to reports in Spain.

Messi is currently on honeymoon after marrying his childhood sweetheart and mother of their two children Antonella Roccuzzo on Friday at a luxury hotel in the heart of Rosario, and now he will sign a new contract at Barcelona when he returns next week for pre-season training.

ALSO READ: ‘I Thought That I Was Inside A Video Game’ – Neymar Was Embarrassed To Speak To Messi

The new deal will also have a mammoth €300 million (£263m) release clause that will make it difficult for other clubs to lure him away.

ALSO READ: Messi’s Mum Causes Controversy By Turning Up To Her Son’s Wedding In White Dress

But last month City’s chief executive Ferran Soriano revealed that he failed to land the Argentine legend at the Etihad.

ALSO READ: Lionel Messi Marries Antonella Roccuzzo As Teammates Past And Present Turn Out For ‘Wedding Of The Century’

When asked if City had a chance of signing Messi, Soriano said: “No. I don’t think so.”

“I know Messi very well. He and his family are my good friends.”

“At least next year, maybe he can finish that career. After that he can go to China or US, but now I think he will stay in Barcelona.”