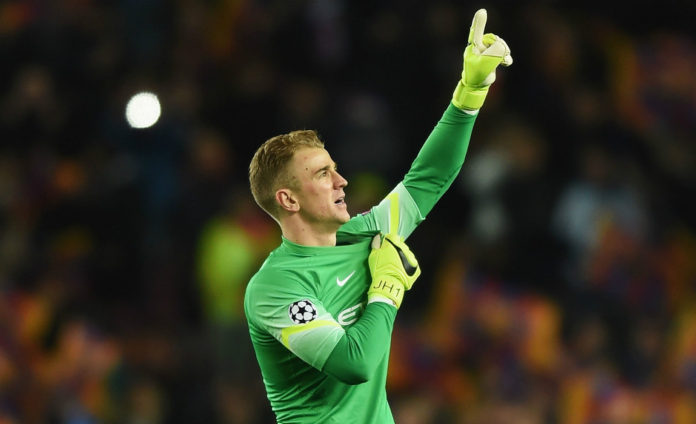 Man City and England goalkeeper Joe Hart has been linked with a move to Liverpool and he is set to accept a pay cut, according to foottheball sources.

Sources also claim that Joe Hart is willing to join the reds after Everton declared  that they have no interest in the English goalkeeper.

After taking charge at Man City, Pep Guardiola has hinted that Joe Hart is not in his plans for the new season and now the former Barcelona and Bayern Minich boss has signed Bravo for £17m due to his abilities with the ball at feet coupled with loads of experience. Bravo’s arrival to the City squad has forced the club to look for potential suitors for Hart.

It is believed that Joe Hart is all set to lower his £150,000-a-week wage packet in oder to cement his move to Liverpool.

However, Hart’s anticipated move to the Reds looks difficult as Klopp has already roped in goalkeeper Loris Karius for £4.7m from FSV Mainz, and already have the option of Simon Mignolet as the No.1 man at Anfiled.

Mignolet has drawn huge criticism from fans due to prolonged inconsistency in his form, but it is believed that Klopp is satisfied with the goalkeeping options, despite Karius sidelined with a broken hand.

Earlier, rumours claimed that Everton are interested in roping in the out-of-favour Man City keeper, but Ronald Koeman has recently declared that the club has no interest in the English goalkeeper.

The Dutch match is satisfied with his goalkeeping options – the new summer signing Maarten Stekelenburg and Joel Robles.

In a pre-match press conference ahead of Saturday’s home clash against Stoke City, Koeman has rubbished all the possibilities of Hart’s potential transfer to Everton.