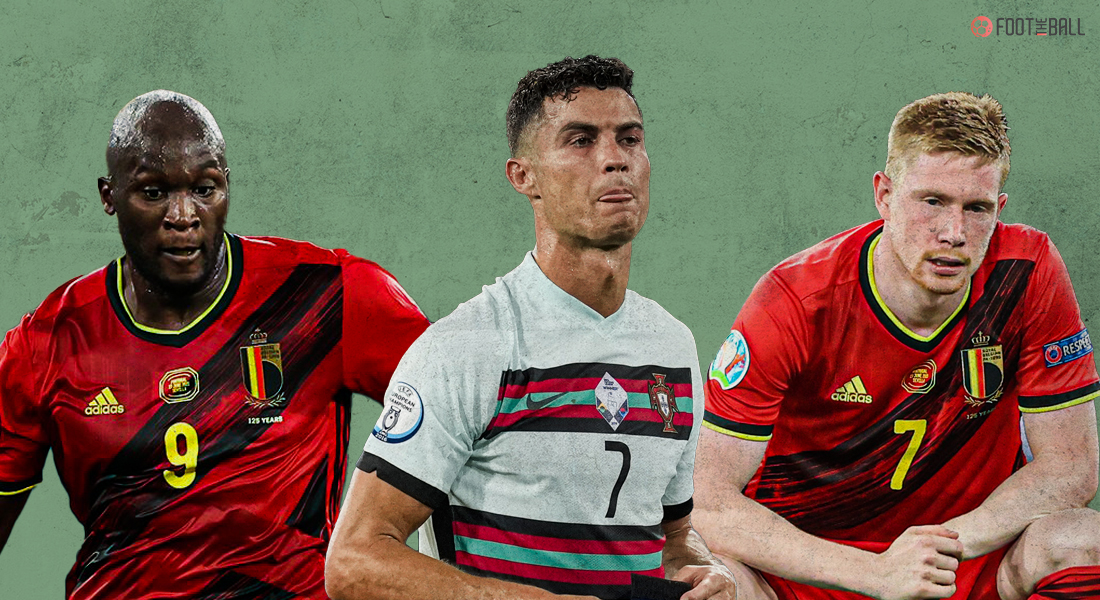 A Thorgan Hazard screamer was enough for Belgium to secure a place in the quarter-finals as they beat Portugal 1-0. His first strike sealed the game and sent the defending champions Portugal home. Belgium now booked a date with another title favorites Italy in the quarters.

Belgium finished their group with a perfect record. Their Golden Generation made a solid start to the tournament. Portugal on the other hand were below par in their group of death. They won their opener against Hungary before losing and drawing to Germany and France respectively.

A moment of quality from Thorgan decided the game in the Red Devils’ favor. FootTheBall brings you 5 things we learned from Belgium vs Portugal in the Round of 16 of Euro 2020.

Belgium were slight favorites coming into this game just because of their superior form in the group stages. Make no mistake Portugal were underdogs only because of their group stage games. Quality-wise, these are two of the best international sides in the world. They were expected to slaughter each other on the pitch when they met.

Instead, we got a dull game of football. Both sides chose a pragmatic style of play. They defended tightly and no spaces were on offer in or around the box. A sense of adventure was missing from either side. This compact defending meant shots had to come from outside the box. Thorgan Hazard was the one who had luck shooting from outside. His swerving strike just before halftime was enough to win the game.

The game opened up in the second half as Portugal stepped up their efforts for an equalizer. Ronaldo, Jota had chances but failed to take them. The Selecao opened up a barrage of shots late in the half as they restricted Belgium to counter-attacking. Portugal were unlucky as they found Thibaut Courtois invincible in the Belgian goal.

2) RONALDO HAS TO WAIT

Cristiano Ronaldo was on the verge of history coming into this game. He was tied with Ali Daei on 109 goals as the highest international goalscorer. A goal could’ve seen him break another record at the Euros. He recently became the highest goal scorer in the history of the Euros and also the first player to play in five different editions.

These kinds of games are the ones Ronaldo thrives on perfectly. Tonight, it just didn’t click for him. He came closest to scoring with a free-kick in the first half. Courtois denied him from making more history. Ronaldo also had a couple of half-chances in the second half to score.

As his Euro ends, Ronaldo must wait for Portugal’s world cup qualifier to score his 110th goal.

3) THE GOLDEN GENERATION CAN DO IT NOW

Belgium are the world’s top-ranked football team. Ever since Roberto Martinez took over they’ve been a real force in world football. The Golden Generation on the rise since the 2008 Beijing Olympics was reaching its saturation point. There were fears of them losing the golden generation without winning anything tangible. They entered the Euros as favorites this time.

The Red Devils have been superb in the group stages. Their team was well-rounded in attack and defence and had world-class talents. However, doubts remained over their big game approach. In their first knockout game, they met the defending champions Portugal. A 1-0 victory perfectly showcases their title credentials and their fans can finally believe their golden generation to win it this time.

However, Belgium would be sweating on the availability of their star man Kevin de Bruyne who limped off with an injury.

Portugal finished third in the group of death behind France and Germany. They wouldn’t have worried much about the third position. At the 2016 Euros, Portugal finished 3rd without winning a game in the group stages. They went onto win the tournament. This time around, history didn’t repeat itself.

Many people felt that Fernando Santos’ Selecao had a better squad now than the class of 2016. Ronaldo had more support from Diogo Jota, Bruno Fernandes, and co. This turned out to be a disadvantage for them. At times their forwards lacked chemistry and the link-up play wasn’t working. Their defence which was touted as a weak link from the beginning failed to perform again. Ruben Dias the PL player of the year had a shaky Euros and knows how international football feels like.

This defeat brings a disappointing Euros to an end for them. They have only won a single game at the tournament. They would like to focus on the 2022 world cup now.

5) TOO HOT TO HANDLE

Belgium’s attack and defence were too hot to handle for their Portuguese counterparts. Romelu Lukaku hasn’t scored a goal but put in a monstrous performance as the lone striker. His strength while on the ball drew numerous fouls. He was a constant menace to the defenders and led Belgium on the break late in the second half again and again with his tireless running.

The Hazard brothers were the most impressive. Eden Hazard returning to the starting lineup is looking like his previous self. The wing wizard is back to slick passing best and is creating chances. However, his brother Throgan was the one who made the headlines today. A stunning effort before the half-time won the game for his side. He was rightly chosen as the hero of the match.

Their defence stood strong to keep the Portuguese at bay. Especially in the second half when Portugal opened a barrage of shots they absorbed pressure like a sponge. They kept taking hit after hit and released it in the form of a rare counter. They look the real deal and are worthy champions in the making.