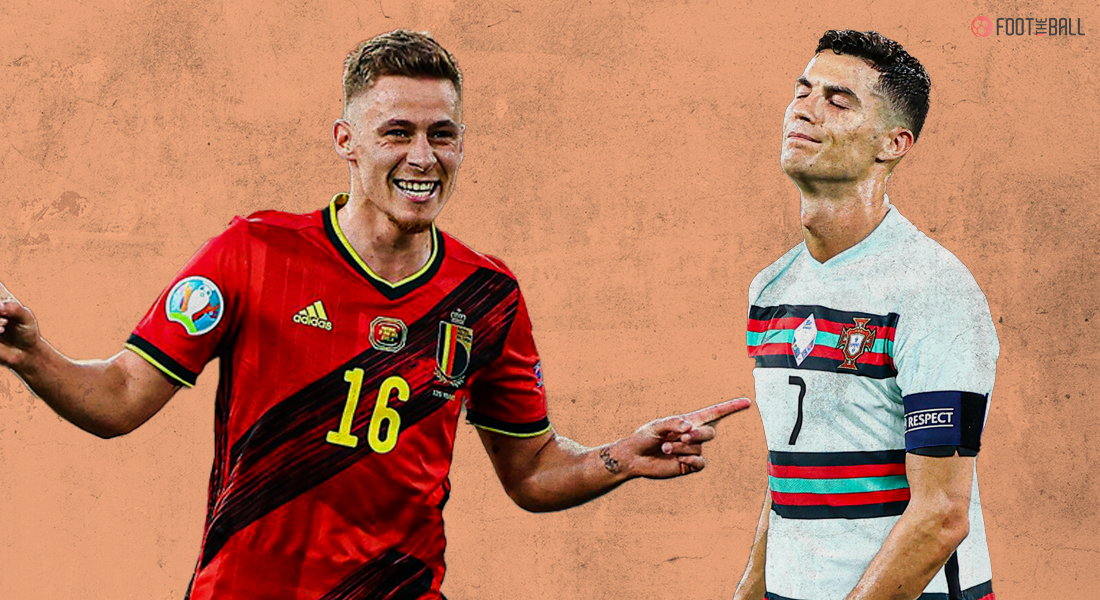 A finger-licking battle was on the cards when a hungry Belgium army locked horns with reigning champions Portugal. The Red Devils marched to the knockout stages with a perfect group-stage record whereas Fernando Santos’ army finished third in the ‘Group of Death’.

The 2016 European conquerors looked rusty throughout the tournament with boundless pressure laid on Cristiano Ronaldo’s ageing shoulder. Whereas Belgium’s golden generation still looked to quench their thirst for silverware. A jaw-dropping fixture at Seville ended with Belgium emerging victorious against Portugal 1-0.

Thorgan Hazard’s scintillating finish in the last-knockings of the first period gave Roberto Martinez’s army a pivotal lead going into the tunnel.

As Belgium conquered their rivals 1-0, FootTheBall takes a look at the best and worst performers in the match between the golden generations of Belgium and Portugal in the Round of 16.

Donning a billion-dollar surname, the younger Hazard brother stunned Seville with a thunderous strike just 3 minutes before the break. The Borussia Dortmund youngster bagged his second goal of the tournament wrong-footing Rui Patricio to find the back of the net. Patricio, a brick wall between the posts, is an undefeatable force but Hazard’s delicious wallop completely fooled the 33-year-old. Romelu Lukaku’s hold-up play initiated the attack who looked for a galloping Kevin De Bruyne.

But towering Manchester City defender Ruben Dias blocked his club colleague’s majestic attempt. The Red Devils recycled possession soon after with Thomas Meunier locating Thorgan Hazard in a pocket of space. The talismanic winger without a doubt in his mind looked to rattle Rui Patricio.

Rui Patricio’s left hand was dismantled as Thorgan Hazard’s thumping shot bulged in his net giving Belgium a pivotal advantage before the referee’s first-half whistle. Thorgan throughout the night dictated the pitch spotting half chances for his team. His whopping crosses almost found Romelu Lukaku on a few occasions, and his divine connection with Belgium’s midfield maestros created havoc in the Portuguese bunker.

A silent protagonist shrouded by world-class names on his team-sheet, Thomas Meunier once again had an impactful performance for the Red Devils. The fulcrum of Martinez’s midfield, Meunier efficiently controlled the moment throughout the night in Spain. A cheeky first-half assist and a disciplined defensive performance helped Belgium break the Portuguese fortress. Meunier is a classic example of a footballer who prides himself on finishing the task with simplicity.

The PSG right-back handled the ball with perfection and Kevin De Bruyne’s injury increased the pressure on his shoulders. But the Belgium army resembled a sponge, soaking the heat Portugal threw at them. He is a diligent performer who looked extremely concentrated, reliable, and appeared of excellent calibre, and he pulls off the magic without any unnecessary glitter. Meunier straddles the line with his performance by displaying elegance and composure. A mouth-watering round-of-16 appearance boasted Meunier’s and Belgium’s chances of lifting silverware this summer.

HONOURABLE MENTION- Eden Hazard’s has seemingly returned to his best. Is his Los Blancos career about to finally take off next season after a successful Euro 2020? The Belgian winger dropped a bombastic performance in this game. A headache for the Portuguese defence, the two Belgium brothers dominated the rival backline. Showing immaculate dribbling abilities and precise passing abilities, Hazard impressed the world with a scintillating display.

The leader of the pack, the Michael Jackson of football, the writer of Portugal’s footballing miracles, Cristiano Ronaldo is Portugal’s heartbeat. With the weight of a country on his shoulders, the charismatic forward once again looked to fulfil a billion dreams. With 5 goals in the group stages, Ronaldo was bashing records day-in and day-out before he met with Belgium. Equalling Ali Daei’s long-prevailing record, destroying Coca-Cola’s stocks, and netting jaw-dropping penalties, the Juventus striker looked lethal.

Losing possession, snatching at shots, and running out of ideas were the Portuguese highlights on a shambolic Sunday night. The centre-forward didn’t receive any assistance from Diogo Jota or his secondary Andre Silva, as Santos’ army was thrown out of Euro 2020. Ronaldo rattled the frame of the goal before the ball landed in Courtoui’s arms, as a shambolic night for the veteran ended with an embarrassing defeat.

A star-studded Portuguese army failed to establish a footing against Belgium on Sunday. Right off the bat, Portugal’s strikers malfunctioned and Belgium’s nervy backline was never exposed. Martinez’s men dictated the tempo on the pitch, constantly looking for pockets of spaces. With the stakes getting higher, the pressure started crawling and the two sides began their mind-games. Unfortunately for Portugal, a faltered Selecao defence had a rough night. Pepe, operating at the heart of the Portuguese defence, couldn’t handle the flamboyance of the Hazard brothers.

Romelu Lukaku’s strength bothered the Porto centre-back and the former’s vigour and robustness gave the younger Hazard the license to shoot. A beautiful strike gave Belgium the advantage and questions were raised on the reigning champions’ backline. With tackles flying in, Seville’s stadium resembled a bull-fighting arena. Pepe’s yellow card in the second half owing to a rash tackle on Mertens summed up the centre-backs game perfectly.