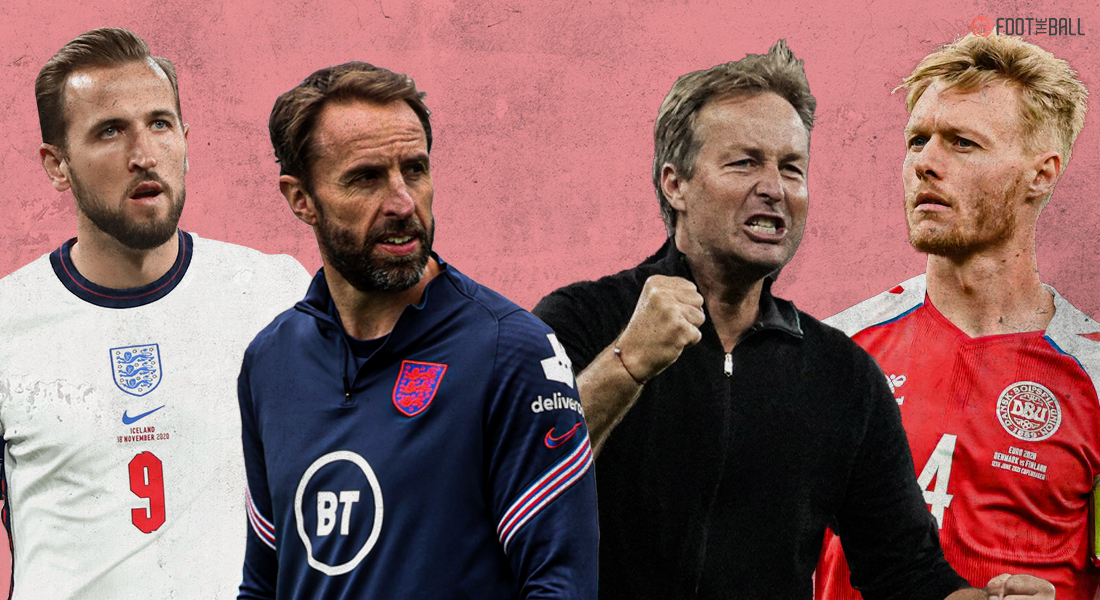 A piquant evening at Wembley will feature England lock horns with Denmark in a mouth-watering semi-final brawl. Denmark’s emotional roller-coaster prepares for another ride while the ‘It’s Coming Home’ war-cry shrouds Wembley.

Two shambolic defeats against Finland and Belgium after Eriksen’s tragedy, Denmark have picked themselves up like a warrior. As a wounded lion prepares to face England’s Lions, the question will be if ambitions will propel or will resilience outscore the rivals?

For the actual Three Lions, the extravagant expedition has no end. Questions blackened the pundits’ judgement of Gareth Southgate who has impressed the world with his managerial tactics. Turning back the clock to 2018, the stage was the same with England facing underdogs Croatia. We all know what happened, the veterans faltered and inspiration and toughness triumphed.

A replica of 1992 for Denmark or 1966 for England, the thousand of fans in Wembley and the billions who’ll be glued to their television sets will witness a chronicle for the ages.

THE BATTLE OF TWO DEFENSIVE STARS

Two outfits with rock-solid defence, the Three Lions and the Danish Dynamites have conquered the defensive throne this summer. The roaring Wembley screamed ‘It’s Coming Home’ every second Harry Maguire or Kyle Walker dispossessed the Ukrainian forwards. Or when Timo Werner’s thunderous strike was rescued by a leaping Jordan Pickford, even David Beckham gave Southgate’s defence a standing ovation. Zero goals conceded in their glorious semi-final run, the English defence has been staggering this summer.

Gareth Southgate picked up four right-backs in his roster in England’s provisional squad. A questionable decision maybe? Well for England the defensive dominance has perfectly worked out. The captain of the ship Maguire has enjoyed an exceptional outing for the Red Devils and his international squad. Luke Shaw or ‘Shawberto Carlos’ breathed life into Southgate’s army with exceptional performances in the knockout stages.

Pickford hasn’t heard from the rival attackers throughout the tournament with the Toffee’s shot-stopper has rarely used his gloves throughout the tournament. While Kasper Schmeichel has been troubled playing for the Danes, the Leicester City netminder will be Denmark’s brick wall once again at Wembley. The fan’s Man-of-the-Tournament, Simon Kjaer partnered with Andreas Christensen and Jannik Vestergaard have inspired Denmark’s fairytale journey.

A fierce defensive battle in England, Hjumland’s dreams lay in the hands of a solid defensive discipline. The 1992 heroics could be repeated only if Kjaer and his two under-studies command the starving English strikers. With Kane tasting blood and Sterling living a goal-scoring dream, England’s strikers could be licking their lips if the Danes falter even once. While on the other hand, if the Danish strikers break England’s flawless record Southgate’s outspread smile could turn into a frown.

With a 4th Lion backing the homeboys when England host Denmark on Wednesday, the Euro 2020 semi-final could be a spicy affair. The bashing English striker has hurdled past oppositions throughout the summer jamboree. Vengeance against Croatia, thundering past Die Mannschaft, and smacking ‘The Blue and Yellow’ in the quarter-finals, the forward battery has unlocked its full potential. The Danish defence has looked nervy on occasions and the hungry duo of Kane and Sterling will be looking to add to their goal tally on Wednesday.

The Czech Republic did prove to be a headache by adding just one man in the centre of the pitch. Eriksen’s collapse collapsed the attacking flair in Denmark’s midfield which England could exploit. While English weaponry consisting of Grealish, Sancho, Foden, and Mount, are carrying the tag of the new golden generation of England.

But the Danes possess a goal-scoring threat and once they sniff an opportunity you can rarely stop the Danish train. Hjulmand, the managerial grandmaster, tweaks with Denmark’s formations quite often and the squad’s determination and adaptation assists the manager. 4 goals against a drained Welsh squad and underdogs Russia proved Denmark’s attacking quality.

Kasper Dolberg has 3 goals under his belt and is an enormous stumbling block standing in front of a billion dreams. Braithwaite and Damsgaard perfectly complemented the youngster with both forwards bagging a goal each for Denmark.

For England, they have hardly set a foot wrong in their monumental journey to the semi-finals. Gareth Southgate’s tactics came under the scanner after a stalemate against neighbours Scotland but the Three Lions have stayed true to their name. The control in defence and the presence of Kalvin Phillips in Southgate’s midfield fulcrum have bolstered their silverware chances.

🏴󠁧󠁢󠁥󠁮󠁧󠁿 Sum up that Kalvin Phillips display in one word 👇#EURO2020 pic.twitter.com/mJeaNuf7ba

Although Denmark is flying high, the English challenge could slash their tails quite easily. While overconfidence is the only hindrance in England earning the final tickets against Italy.