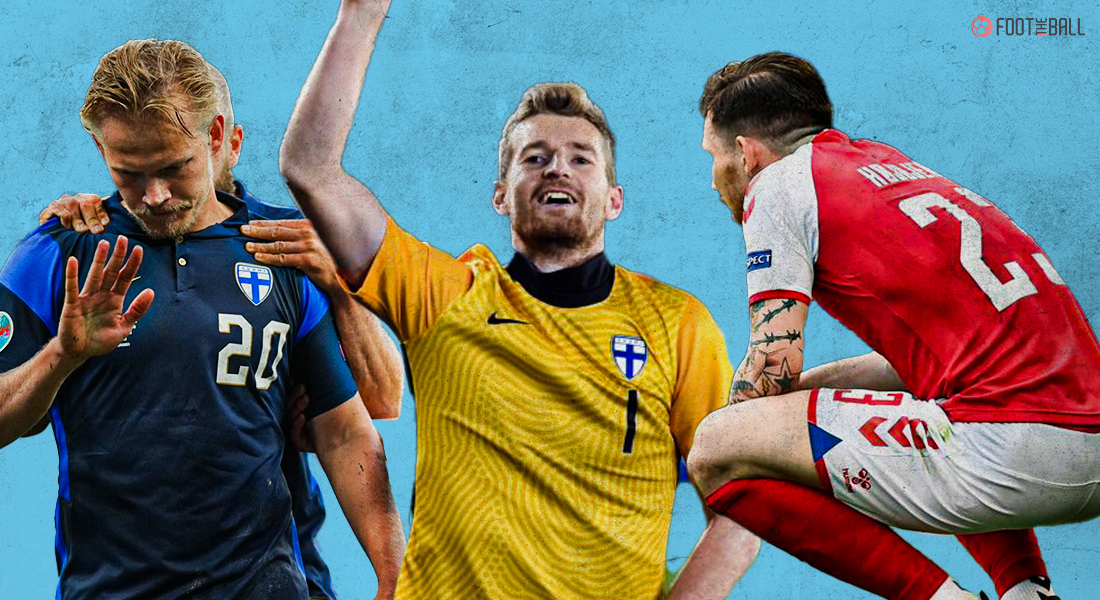 Denmark met Finland in the first game of Group B, with the Finns making their debut at a major international competition.

It was the home side that got the first on target, with Wind forcing Hradecky into a fine low save within seven minutes. The Danes were having most of the possession as expected with Finland being closed down quickly. Hradecky had to be alert to tip Hojberg’s header over the bar as the pressure continued.

Eriksen was the next to test Hradecky with the goalkeeper palming the ball away. Finland were not able to build up play with the ball, being forced to give up possession quickly. Pukki, their main threat, was left increasingly isolated with the three man Danish defence. Meanwhile, the home team kept attacking and looked set to open the scoring.

The game became a stop-start affair near the half hour mark with a few hard challenges and players staying down. However, the major shock came when Eriksen went down five minutes from halftime and was not moving. It turned out far more serious than anyone thought, with the players in tears and praying. The medical team stayed with him for 15 minutes on the pitch before he was carried off on a stretcher as the match was suspended. Since then, UEFA has confirmed that he is stable, awake and responding.

Following the request made by players of both teams, UEFA has agreed to restart the match between Denmark and Finland tonight at 20:30 CET.

The last four minutes of the first half will be played, there will then be a 5-minute half-time break followed by the second half.

The match resumed at 20:30 CET with five minutes of the first half followed by a five minute break before the second half. Those five minutes went by without any noticeable incident with play clearly needing more minutes to heat up again.

Denmark kept up the pressure and pegged Finland back, blasting a couple of shots that went wide. However, it was the away side that took the very unexpected lead. Jere Uronen’s cross from the left was headed in by Joel Pohjanpalo with Schmeichel unable to claw the ball out strongly enough. It was Finland’s first ever goal at a major tournament finals.

The match became much more of an even contest after the goal, with Denmark struggling to break down the organised shape of the away side. Denmark had a great chance to equalise as Poulsen was fouled inside the penalty box. With Erisken off the pitch, Hojberg stepped up to take the spot kick and his truly awful attempt was easily saved by Hradecky down to his right.

As the match entered the final ten minutes, Braithwaite’s cut back into the box found no takers with Finland forced to scramble it clear from in front of Hradecky. It was clear that all the Danish momentum from the first half had been lost after the incident with Eriksen, as Finland stayed resolute to win their first ever match at the Euros.

Eriksen has been the star man for Denmark for many years now. He was influential in all good things that the team were doing in this match, and were primed to lead at any moment. However, the events at the 40th minute mark altered the whole setting. A throw in at the far side of the pitch was followed by Eriksen just collapsing on his own and needing immediate medical attention.

Fans and players could be seen in tears and praying profusely as the match was suspended. Eriksen is now stable, awake and doing much better under professional help. There were many heroes in this- referee’s quick stoppage, players forming a shield around Eriksen, captain Simon Kjaer consoling others, and more. The supporters of both times were fully behind Eriksen all throughout the way as the match was restarted later.

DANES NEED TO STEP UP

Granted this was not the toughest test for the Danish team, but the way they dominated Finland spoke of their talent. In Eriksen, Delaney, Braithwaite, Hojberg all were right on the money from the off. They had 12 shots to Finland’s zero in the first half and only some dogged defending helped them remain level at halftime. Their defence too was top notch and it looked for certain that they would get their goal in the second half.

That proved to be a false dawn however, with Finland taking a shock lead just past the hour mark. Pohjanpalo’s header should have been saved by Schmeichel who got both hands on to the ball but let it squirm through. Things got from bad to worse when, after earning a penalty, Hojberg’s meek effort almost down the middle was bread and butter for Hradecky in goal. Denmark ended up losing the match, but clearly their evening was worse in a lot of other ways.

FINNS PULL OFF A SURPRISE

Finland, in their debut Euro match, did take time to settle into the game. There were nerves on display and they could not keep possession of the ball well enough. Most of their attacking play focused on letting Pukki chase the ball while their build up play was poor. Only some last ditch defending and sharp saves from Hradecky kept things level till halftime.

1 – Joel Pohjanpalo scored Finland’s first ever goal at the European Championships with what was their first shot in the competition. Lift-off. #EURO2020 #FIN #DEN pic.twitter.com/bsSdRjrDJX

They went ahead in the 60th minute through with Union Berlin striker Pohjanpalo’s headed effort. Their fans were in absolute delirium and the mood inside the stadium was clearly now upbeat for the away side. Their first real mistake at the back came when Arajuuri fouled Poulsen inside the box. Hradecky, in supreme form, saved easily from Hojberg’s shot and the score remained 1-0. Finland kept Denmark at bay for the remaining time to seal a famous, famous win in Finnish history.