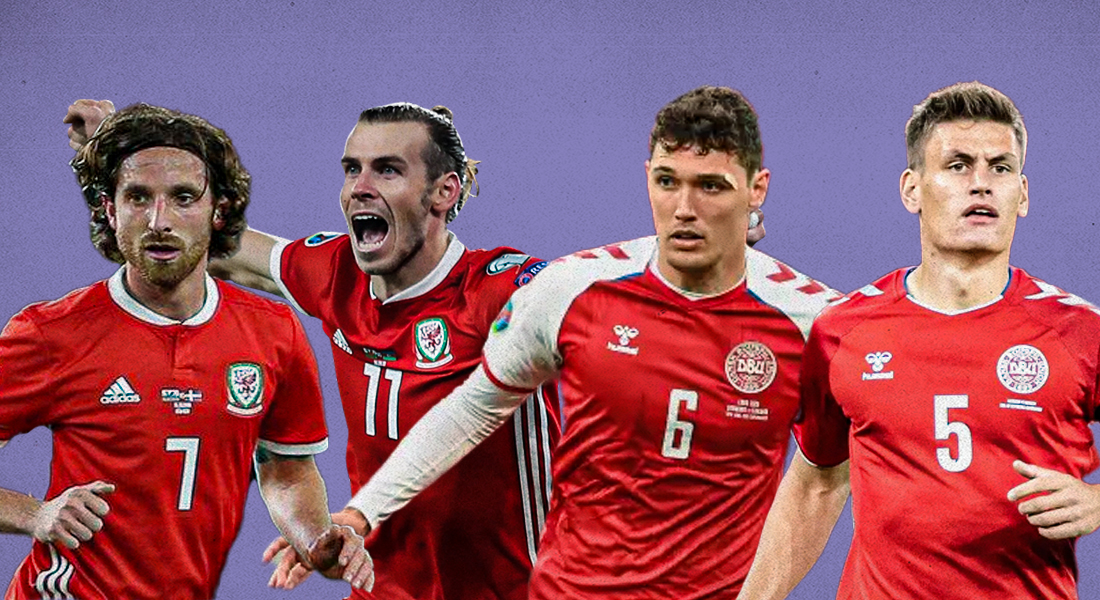 The Round of 16 fixtures will start with Group A’s Wales taking on Group B’s Denmark. Two teams that have dominated the scene more with the heart than with their football. A truly inspiring performance from Gareth Bale led Wales earned them a second-place finish in the group with four points. Denmark came back to life after unfortunate events in their first match to secure a crucial three points in their final fixture against Russia to earn them a spot in the knockouts.

Denmark will come into the match brimming with confidence after their emphatic win against Russia. Wales on the other hand lost against an unbeatable Italian side by a lone goal. This though might not be enough to put them off but Bale and co. will be extra cautious heading into the fixture. FootTheBall has identified three key matchups that might be crucial in deciding the tie. After all, in one-off matches, it is these matchups that play a vital role.

Two players at the heart of their respective teams, Damsgaard and Joe Allen are likely to come face to face more often than not. The twenty-year-old Danish midfielder set off the scoring spree in their last match against Russia. A brilliant goal from outside the box was just the opening Denmark needed. The teenager occupies the pocket of space behind their central striker Poulsen. Capable of running at defenders and scoring from distance, the Sampdoria attacking midfielder is a nuisance for any opposition defence.

Joe Allen on the other hand is the kind of consistent player that any manager would love to field. At thirty-one years of age, the central midfielder stays true to his role. Almost always an available option in the central areas of the field, Allen plays quick passes lays the ball off perfectly to his teammates. Never one to err, the midfielder will have extra defensive duties as they take on Denmark. Damsgaard will not be an easy customer and the battle in midfield can tip the game either way.

Premier League duo Daniel James and Andreas Christensen will be an interesting watch when the two teams meet. The Manchester United attacker will be an important asset for Wales in the attacking third. The young attacker has displayed some crisp performances so far in the competition. The versatile attacker is capable of playing in a variety of rales across the front and midfield lines for both club and country. His versatility will be key as he takes on one of the Premier League’s best defenders in Andreas Christensen.

Whether you’ve supported us from home, or travelled to Baku or Rome. We have one thing to say to #TheRedWall.

The Champions League-winning defender will need to use his experience to best use if Denmark is to keep Wales quiet. The central defender who can also act as a defensive midfielder is the type of modern defender who is comfortable on the ball. Accurate passes and strong challenges are his forte. James likes to wander in and around the channels between the defence and midfield and hence Christensen will need to be extra cautious to avoid any mishaps. Daniel James likes to draw out tackles and Christensen likes to lunge into one. A match made in heaven it seems! But, one small slip, and it’s an unnecessary set-piece that can cost the match.

Joakim Maehle is known more for his defensive contributions than his goalscoring prowess. However, he did score the last goal against Russia on Matchday three to help them qualify for the knockouts. The Atalanta full-back is capable of playing on either flank as either a midfield extra or as a defensive cover. Known for his neat footwork and passing abilities, the defender is never bound to lose his concentration. In the upcoming fixture, he simply does not have the luxury of losing his nerve. His opposition is likely to be Wales superstar Gareth Bale.

What a performance! Unreal boys! pic.twitter.com/60B4pvGLHy

The “Welsh Wizard” scored eleven goals in twenty appearances for Tottenham last season. He is currently running the show for Wales and is the leader of the pack. Inspiring performances by the pacy winger has helped them secure this berth. It will once again be up to him to carry this team forward. Joakim Maehle will prove tricky, but on his day, there’s no defender that doesn’t succumb to the jaw-dropping dribbles.