EURO 2020 SQUAD ANALYSIS: SPOILT FOR CHOICE IN MIDFIELD, CAN GARETH SOUTHGATE CRACK THE CODE AND BRING IT HOME?

The great English debate that is argued to this day is here to do the rounds one more time. Why couldn’t any England manager fit Gerrard, Lampard,  Scholes into a system? The squad from 2000-2008 had arguably the greatest English midfield of all time. A few years ago, Premier League Hall Of Fame inductee,  Thiery Henry in conversation with Gary Neville and Jamie Carragher on Sky Sports’s Monday Night Football reiterated the statement, further adding “That at one point of time you English had the best midfield in the world on paper”

So why was it beyond the tactical acumen of  Sven-Goran Eriksson and Fabio Capello to fit England’s golden generation of star clad midfielders into a tactical setup and thus get the best out of them?

In hindsight, a lot of the players that were part of that squad have often spoken out in the media highlighting that a pragmatic and the less fashioned 4-4-2 system was the reason that the dialogue still hogs conversation to this.

More than a decade later. Southgate finds himself with the juggernaut, to crack the English Midfield code ahead of Euro 2020. With a wealth of talent at his disposal, who does the pick and omit.

At the outset, Southgate will have to pick his preferred formation. He has shuffled between a 3-5-2, 4-3-3 and 4-2-3-1 system. England played a 3-5-2 system at the 2018 World Cup. The Three Lions were brilliant on their set-pieces and had a rather favourable draw to the semi-finals.

In the games against Belgium and Croatia, there was much to be desired with the way England played. The inability to keep possession against the bigger teams is what Southgate will be concerned about. 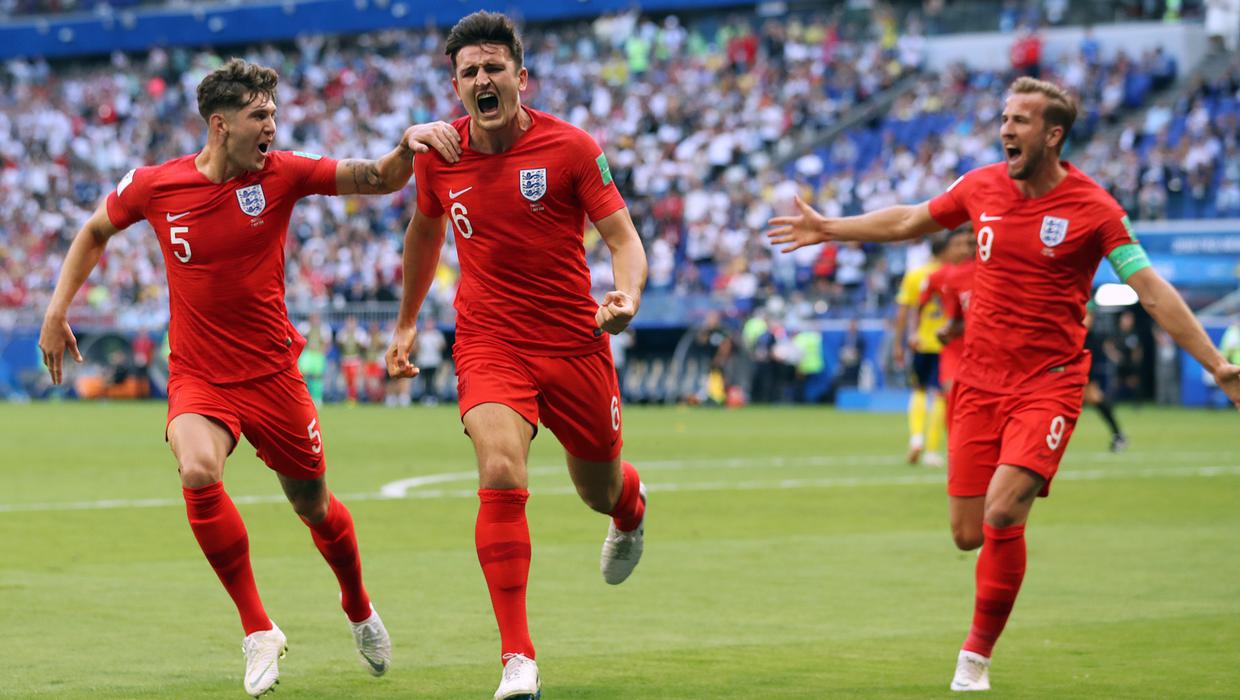 England’s centre backs were lethal from set-pieces at the 2018 FIFA World Cup. Image Courtesy: The Independent

The type of availability of the centrebacks will go a long way in determining the way England set up. Gary Neville made an interesting observation on Monday Night Football, highlighting the importance of Harry Maguire to this England squad.

Maguire’s presence at the heart of the defence is what will hold Gareth from reverting to a back 5. John Stone’s season of redemption at Manchester  City could further increase Southgate’s faith in playing a back a 4 instead of a 5.

This all reverts to the point, will England have to be pragmatic to win the tournament or can they adopt a Slam Bam Thank You Ma’am approach.

The decision taken by UEFA to increase the squad size from 23 to 26 will come as a welcome boost to the fringe players and the ones that will return from injury. The likes of Jesse Lingard, James Maddison, Jack Grealish, Jordan Henderson will breathe a sigh of relief with the hope of making the final roster.

A year ago prospective players joining at the expense of Jordan Henderson seemed an impossibility. The Liverpool captain’s winning mentality, big game pedigree and calming presence in midfield was an asset that was indispensable to Gareth Southgate. Henderson in the middle of the park was a midfield general until his untimely groin injury in February.

The Liverpool captain is in his final stage of rehabilitation and will be hoping to return in time for the friendlies before the Euros in order to improve his match fitness.

In the time that Henderson has been on the sidelines, Leeds United’s Kalvin Phillips has transferred his club form to the international stage and has formed a formidable partnership alongside Declan Rice. Rice’s importance to Southgate’s England only seems to grow. There was a time when it was his place in the team that was being discussed when the manager’s commitment to the double pivot in midfield was questioned. However strong performances have made the pundits think otherwise.

Phillips was one of the standout performers in England’s win against Poland in the last World Cup qualifier. He has taken massive strides in claiming a spot at the Euros, having also had a strong season at club level. If Henderson struggles to prove fitness the Leeds United midfielder would be the perfect solution to his absence.

If Southgate decides to stick with the double pivot, Phillips and Rice seem like the perfect answer. Other noteworthy players that could challenge them for a spot could be Tottenham duo Eric Dier and Harry Winks but it seems highly unlikely the case with their current poor form in the Premier League.

The icicle piercing headache that Gareth will embrace is solving the dilemma of fitting Mason Mount, Jack Grealish and  Phil Foden into his lineup. Both Grealish and Foden can play on the left of a front three.

🏴󠁧󠁢󠁥󠁮󠁧󠁿 Which position are they strongest in and which are they weakest? pic.twitter.com/gt7OdyKKtC

It was a no brainer that Grealish would be on the team bus to the Euros, but a calf injury sustained in February ruled him out of the all-important World Cup qualifiers last month.  The midfielder has started training in the gym, with Southgate carefully monitoring the situation. England will be banking on Grealish to hit full fitness ahead of time.  The Aston Villa star is a nightmare for any opponent when on song.

Phil Foden started the last two qualifiers against Albania and Poland. Having switched from his preferred 3-4-3 formation to a 4-3-3 Southgate had the option of playing Phil in his preferred No 8 position as a box to box midfielder. However, Phil played on the left of a front three. Foden is a technician a conductor and has the rare capacity to excite, which is why, like Grealish, there is such a clamour to involve him.

The young Manchester City star has the ability to play in a number of positions and has even played as a false 9 for Pep Guardiola this season. Foden has 13 goals for Manchester City this season the fourth highest at the club. It’s hard to disguise the progress the Mancunian lad has made and he will be raring to star at the Euro championship this summer.

It was feared amongst many that the fledgling rise of Mason Mount would be halted with the arrival of Tomas Tuchel. Mount who captained the side in Lampard’s last game in charge was dropped by Tuchel in his first game. That clearly showed the contrast in the challenge ahead of the England International.

Weeks later and Mount has scored in the quarterfinal and the semi-final of the Champions League as Chelsea reached the final for the first time since 2012. Mount has also earned the trust of the England boss starting the last 8 games for the National side.

The talent platter cocooned at St George’s would be a site for the England manager. It’s the jigsaw that he would embrace before he makes his final roster. Gareth will have his first set of 20 names already decided by now, it will be the differentials that will need the nutcracker.

The rise of Jesse Lingard, the premature captivating performance of Jude Bellingham and  James Ward Prowse’s extraordinary ability on set pieces are questions that need answering. The solution won’t just lie with picking his final roster but the expectation and the tactical know-how to get the best out of the squad will be the task for Southgate and his team

Southgate has transformed the England camp, he has gradually eradicated the inter-club divide that has culturally existed in the past. With a happy camp and players that enjoy playing for the manager, Southgate’s next assignment will be to deliver the big one. Post the championship summer will the doubts still prevail? It will be down to Gareth and his hungry Lions to finally bring it home.