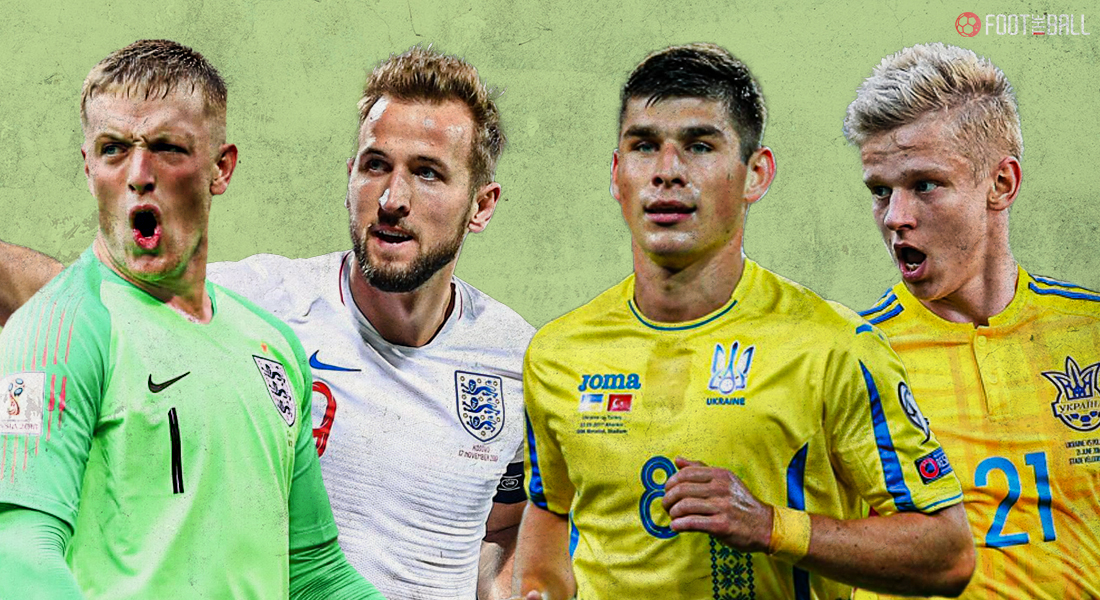 The underdogs of Group C who got into the knockouts by being the fourth-best third-placed team in the competition, clutching on straws, have found their way into the quarterfinals of the tournament by defeating Sweden in the Round of 16. In their path of making history and going further ahead in the tournament, lies a riveting fixture against England which will test them to the limits.

The English side is yet to concede a goal with its rock-solid defence in both three-man and four-man backline used by Gareth Southgate. Ukraine has shown no signs of fear so far in the tournament and has gone all guns blazing under the guidance of Ukraine and AC Milan legend Andriy Shevchenko.

As England prepares to continue its unbeaten run in the tournament and go all the way, with their next challenge being the first-time participants in Euro knockouts Ukraine, FootTheBall brings the combined XI of both squads based on their form at Euro 2020 —

Gareth Southgate’s decision to pick the Everton goalkeeper received mixed reactions at first, but his ability to sweep up the pitch and distribution made him the top choice. He has given the desired results to the manager and repaid his trust with four out of four clean sheets.

The 27-year old goalkeeper made seven saves and 18 claims in the four games, standing like a wall between the posts even against the likes of Germany, Croatia and the Czech Republic.

His counterpart Georgiy Bushchan has also been a great asset for Ukraine and deserves an honourable mention.

The Manchester City centre-half was in doubt over his place in the club’s starting eleven after the addition of Ruben Dias and Nathan Ake and especially after a downfall in his performances the season prior. But the 27-year old defender revived himself and came back to his usual best, making him one of the rare sure shot starters for Gareth Southgate in Euro 2020.

Stones will yet again be crucial against Ukraine as they like to keep the opponents under pressure and create many chances.

It takes a lot to become the most expensive centre-back of all time, and that too by making the notorious Glazer family pay up the asking price. Harry Maguire is certainly one of the best defenders in world football currently and has proved all his doubters wrong both with Manchester United and England.

He won the Man of the Match award against Germany for his stellar performance in a three-man backline as he won 100% of his aerial and ground duels during the game. He is yet to be dribbled past in the tournament so far.

Apart from his defensive prowess, Maguire is also a great leader which makes him a great addition to Southgate’s squad.

The Manchester United left-back recently made the headlines for his explosive comments on former manager Jose Mourinho. But it didn’t take long for him to brush that news aside and make it to the front page for his brilliant performance against Germany.

Selecting the best fullback pairing has been a difficult task for Southgate and he has tried out different combinations over the course of the tournament. Shaw’s absence from the starting fixture drew criticism considering his performance in the Premier League for the Red Devils. However, Southgate realised it and has kept Shaw in the starting lineup ever since.

The 25-year old left-back played as a wing-back against Germany and was crucial in both the goals that sealed the win for the Three Lions. He assisted one and made the steal for the other before passing it on to Jack Grealish who assisted the goal.

Spanish Champion with Atletico Madrid, the 5’8” right-back was expected to be a key member of the English squad at Euro 2020. However, he started only two games out of four for England but was impressive in both.

The 30-year old right-back was sound in both attacking and defending. He made three key passes, two crosses and 12 ball recoveries in the two games played and kept a well-disciplined record so far. He played in the less preferred left-back position in the first game but still had a decent game.

The in-demand West Ham United defensive midfielder known for his brilliant positional awareness and defensive ability has stood up to the expectations.

The 22-year old has solidified his place in the starting lineup alongside Kalvin Phillips in the absence of seasoned Jordan Henderson. Rice made full use of his opportunity and sealed the spot for a long time to come considering his young age.

Declan Rice made seven tackles and 13 ball recoveries in the four starts and played a key role in keeping the best defensive record in the tournament so far. He has also performed well on the ball and recorded a 92% passing accuracy.

Declan Rice’s partner in the reliable midfield pivot and Leeds United’s sought-after midfielder Kalvin Phillips has outdone his expectations and helped the team out in both halves with his brilliant pressing ability backed by the physicality and stamina that helped him play all four games without a break.

He made nine tackles and thirteen ball recoveries and made the midfield partnership with Rice an invincible one. He assisted the crucial winner against Croatia that kickstarted a brilliant run in the tournament so far.

The two continue to be important for The Three Lions’ pursuit of bringing the trophy home.

The Man City left-back is well renowned for his brilliant attacking adeptness and has lived up to the expectations in the tournament. The 24-year old who won the Premier League this season has been one of the best performers for Ukraine so far.

Zinchenko ran a whopping 44kms, constantly moving up and down the pitch and helping his team out in both attack and defence. He made 19 ball recoveries and recorded a passing accuracy of 82%.

He scored and assisted the crucial goals against Sweden in the Round of 16 tie that helped them outlive the expectations yet again.

The namesake of head coach Shevchenko, Andriy Yarmolenko has been a great asset for Ukraine in the tournament till now, unlike his domestic season which saw him play only for 360 minutes.

He scored and assisted in the must-win game against North Macedonia which secured their place in the knockouts. He has been a key attacking output for Ukraine, using his physical strength to its fullest in order to get the result in their favour.

The West Ham United winger will be a key figure in the final third for Ukraine if they are to breach the England goal and become the first team to do so in the tournament. He will need to be at his best while facing Luke Shaw who has also been in top form for the whole 20/21 season.

Premier League’s star striker and one of the most exciting news items of this transfer window, Harry Kane couldn’t open his goalscoring account in the group stage. Regardless, England topped their group and comfortably reached the knockouts.

When the difficult fixture against Germany came up, Kane was ready to steal the limelight and a beautiful crouching header in the 86th minute sealed England’s win. The fans of the three lions will hope for him to regain the domestic form which saw him become the highest goal scorer as well as the highest assist provider in the Premier League. His challenge will be to get past Dynamo’s Georgiy Bushchan who won’t be easily beaten.

England’s hero of the tournament so far, Manchester City winger Raheem Sterling silenced all his doubters and proved the management right by picking him over the likes of Marcus Rashford and Jack Grealish. Just like his name, his performances have been sterling too, as he scored three of England’s total four goals, including the winners against Croatia and the Czech Republic.

His goal against Germany lit up the Wembley Stadium and generated a spark for England that led to another goal and sealed the 2-0 win in the home side’s favour.

The 26-year old winger will need to help his side defensively too, as Ukraine loves to push forward and outnumber the high-pressing opponents.

The combined is dominated by England, as expected, but this Euros has been a rollercoaster ride for the teams that come into games as favourites. So while the on-paper complexion suggests a comfortable win for England, Ukraine will fancy their chances too.