Oliver Bierhoff Comes Off The Bench To Script History; Germany Win Euro 1996 in England Courtesy of First Ever Golden Goal

A 28-year old German forward who was pretty much a surprise inclusion in the Die Mannschaft squad for Euro 1996 ended up creating history at one of the most prestigious platforms in the game of football.

Lacking any significant international experience and included only on the merit of his club performances, Oliver Bierhoff did not know when he landed in England – the ‘home’ of football – in the summer of 1996 exactly a quarter of a century ago that he would be writing his name in the history books for posterity to remember. 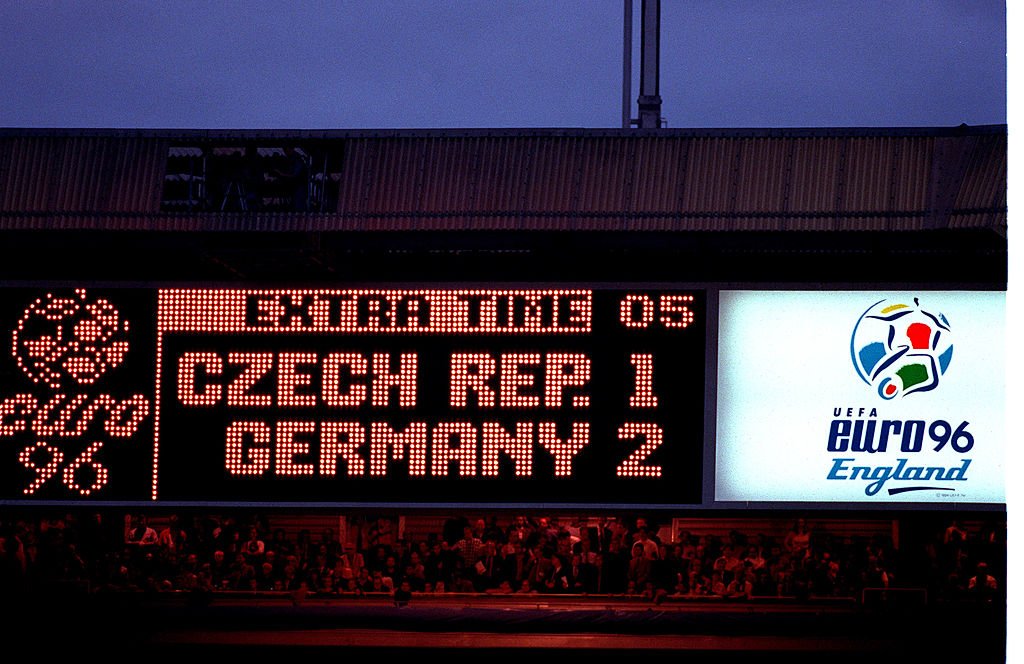 What did he do at Euro 1996? How did he change the course of history that summer? FootTheBall takes a look at Germany’s and Bierhoff’s campaign 25 years ago as Die Mannschaft won their third and latest Euro title on the soil where the beautiful game was born

Oliver Bierhoff had only made his international debut for Germany in February 1996 when he was included in Die Mannschaft’s squad for the Euro 1996 tournament in England.

He had little experience on the international stage and was largely expected to play second fiddle to the likes of Jurgen Klinsmann at the quadrennial tournament. Therefore, even though he had impressed Udinese in Serie A prior to the tournament, there were no particularly high hopes from him coming into Euro 1996. 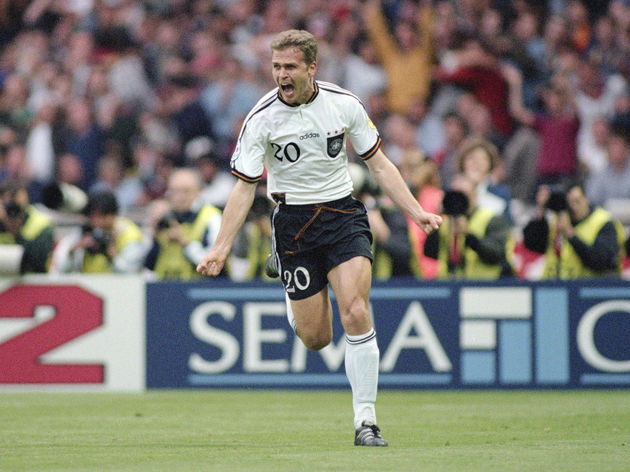 Bierhoff was relegated to the bench for the majority of Germany’s run through the tournament, only coming on in the group stage match with Russia to set up Jurgen Klinsmann in an eventual 3-0 win that saw Germany qualify for the knockout stage with one match to spare.

Germany’s manager at that time Berti Vogts decided against fielding Bierhoff for their match with Italy in the group stage. The same happened during their match with Croatia and England in the quarter-final and semi-final of the competition. 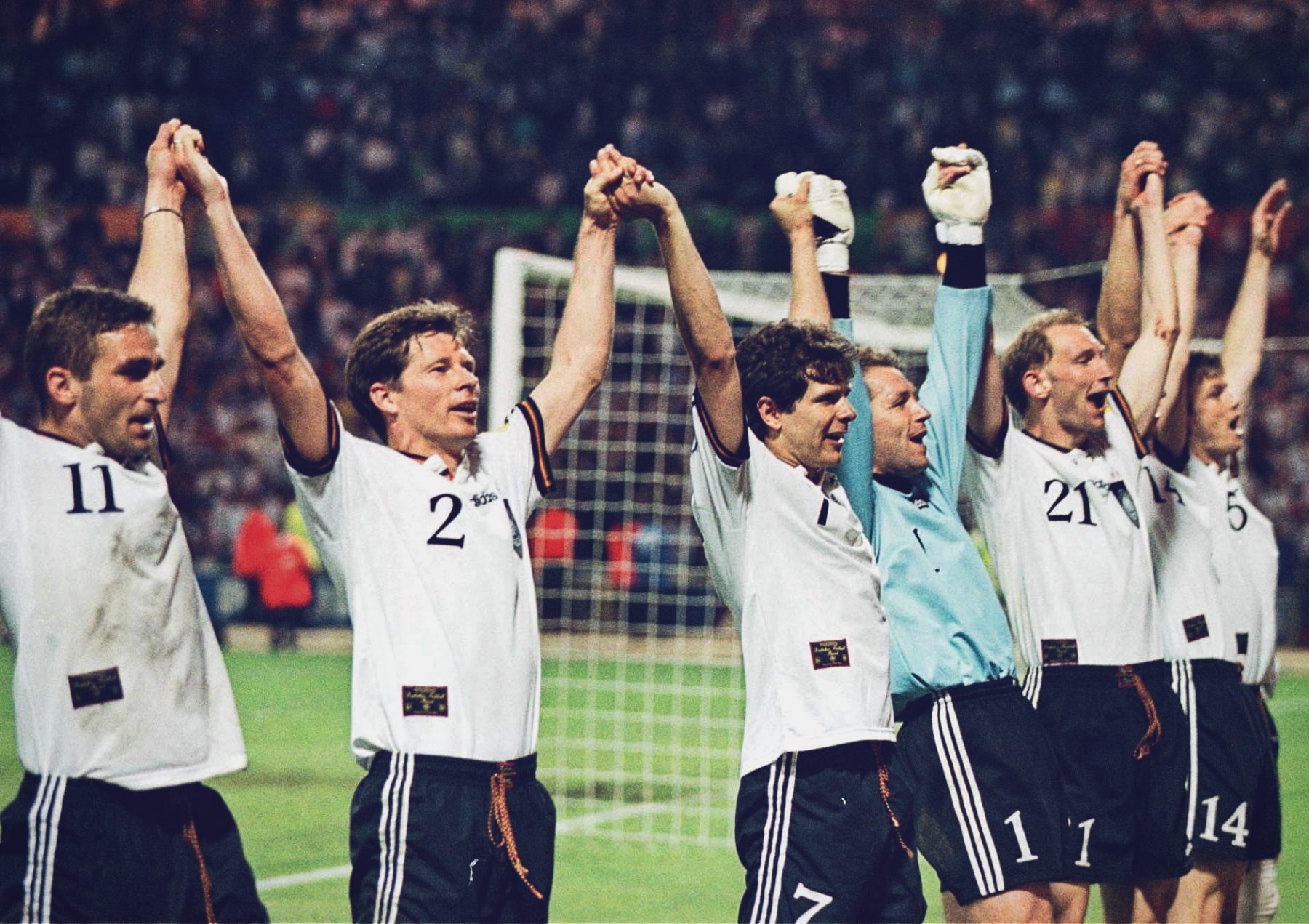 The Germans won comfortably in their match with the Croatians but had to work hard in the semi-final with hosts England. The match went down to penalties and current England manager Gareth Southgate wilted under pressure at Wembley to hand Die Mannschaft a place in the title decider match with the Czech Republic.

And it was in the final showdown of the entire tournament that Bierhoff was to shine at last. A late bloomer who would be forever identified after that fateful day as the scorer of the first-ever golden goal in international football.

For the all-important final, Bierhoff was yet again benched by Berti Vogts as Jurgen Klinsmann and Stefan Kuntz started up front for the Germans.

But, contrary to popular expectation, it was the Czechs who opened the scoring in the second half when they were awarded a penalty after Karel Poborsky was fouled in the penalty box.

Patrik Berger took the resulting penalty and made no mistake from 12 yards as the Czechs claimed the lead in the match.

All this while, Bierhoff was sitting on the sidelines, biding his time, waiting to be substituted on by Vogts into the game. In an interview with UEFA.com, Bierhoff revealed what was going through his mind when he was seated on the bench as Germany fell behind early on in the second half.

He said “During the first half I was still quite relaxed, you’re watching on and looking at how people behave. But then I got a bit nervous when they scored and I started to warm up and wanted to get on quickly”. 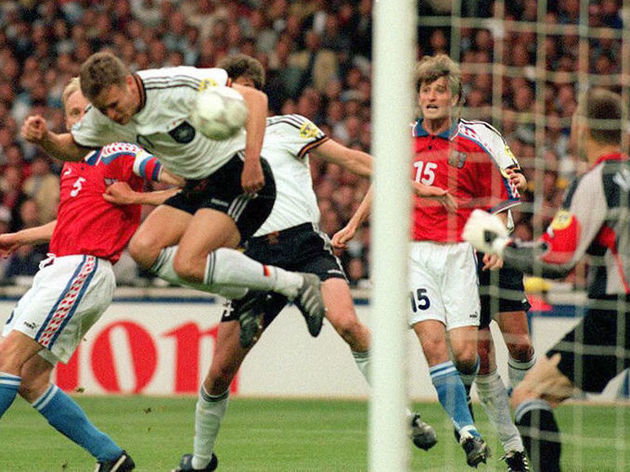 “I was a bit annoyed because it took quite long. But put it this way: with the Czechs’ penalty, my heart rate went up because I realised that I would be the striker who would probably come on and get a chance”.

So it was down to Bierhoff, who hadn’t played a single minute since the Russia game, to bring back Germany into the game. And he did just that when he connected perfectly with a Christian Zege free-kick to head the ball home past Petr Kouba to send the game into extra time.

As the extra 30 minutes started to take their toll on the fatigued bodies of the players on the pitch a long ball came Bierhoff’s way who played it to Klinsmann on his right.

The Germany captain crossed it to Bierhoff who held off his marker firmly and twisted swiftly to release a shot that became the first golden goal in the history of the sport. The ball was parried by Petr Kouba, but he couldn’t prevent it from ending up in the back of the net.

LEGACY LIVES ON 25 YEARS ON

Cue – wild celebrations from the German camp as Die Mannschaft were crowned champions of Europe for the first time since German reunification. Bierhoff was hailed as the hero of the victory as his substitution brought back Germany into the game.

And fittingly, Bierhoff was handed the captain’s armband two years later when Jurgen Klinsmann called it a day after the 1998 World Cup in France.

Thus, today Bierhoff is remembered as the player who rose from near obscurity to becoming the most celebrated footballer at Euro 1996. And even 25 years later, his legacy lives on in Germany and Europe