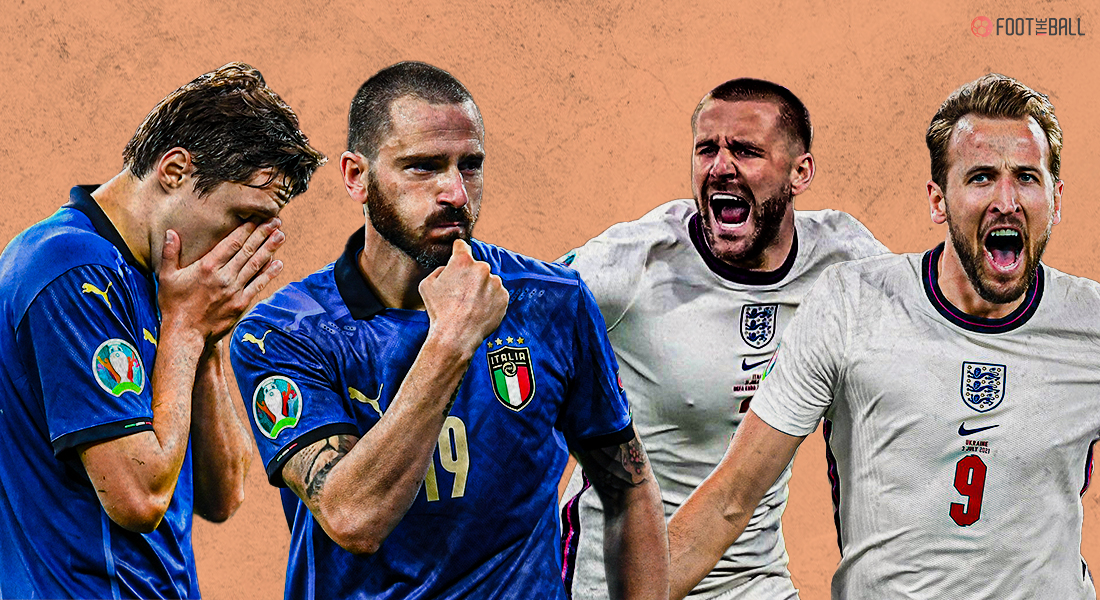 Italy managed to squeeze their way into lifting the Euro 2020 trophy as they beat England on penalties after a 1-1 draw at the end of extra time. England had the better quality on paper, but Italy’s passion for the game helped them pull through.

Both sides were fairly optimistic as they stepped onto the pitch. Italy were on a 33 games unbeaten run and had their key players in tremendous form. On the other hand, England had the best defensive record in the tournament and had the support of drunk blokes singing ‘It’s coming home’ throughout the country. Both were deserving finalists and they delivered an entertaining night on the final day.

FootTheBall brings you our star player of the game and 5 crucial things we learned that shaped up the match.

Kieran Trippier and Luke Shaw brought their A-game onto the pitch tonight as they were simply unstoppable. They stretched the Italian defence really thin which in turn compelled them to leave holes in their backline. England played most of their game on the wings and it was thanks to the efficiency of Shaw and Trippier.

Since Southgate played 3 center-backs which enabled the wing-backs to push ahead without worrying about their defensive duties and it paid off for them rightly so. The opening goal came in under 3 minutes for England as Trippier placed a beautiful ball for Shaw on the other side of the park.

2) ITALY FAILING IN THE FINAL THIRD

Italy should have netted the ball a lot more than they managed to. They had a catalog of goal-scoring opportunities but they just couldn’t find the finishing touch. Immobile has been such a massive disappointment in the knockout stages that it is almost funny. He had the best performance for Itlay in the group stages but the tide completely changed there on. He couldn’t score a single goal, missed many easy opportunities and his overall game was just lethargic.

He couldn’t make any difference tonight as well and hence got subbed off. Itlay dominated the possession and they played better than their opponents in the midfield area. If only they could capitalise on the chances they created, they could have won the game in the first 90 minutes itself.

3) THE IMPACT OF THE ATMOSPHERE

One of England’s biggest strengths in the tournament was not in their camp at all but it was in the surroundings they were playing in. 6 out of the 7 games England have played in Euro 2020 have been in their home stadium. The English fans are the most enthusiastic and passionate football fans in the world and football is a lot more than just a game for them.

The atmosphere has surely played a huge part in England’s success in the tournament and is a bit unfair for the other teams. Unfortunately due to the dire times we find ourselves in, we should let this pass. The Italians managed to overpower the hosts despite all odds and were truly the deserving champions.

4) ENGLAND BOTTLED IT YET AGAIN

England should have had the game in the bag after that early goal. They came onto the pitch with defensive formation and a goal so early was just perfect for their game plan, however, Italy showed their passion on the pitch and got the much-needed equaliser. Italy kept on knocking on the door and England continued to fend off the attacks. But how long can a defence keep that up?

England should have tried to push more players ahead in the second half as it seemed like they were settling for a one-goal lead. They should have pushed for a second and with the quality of players they have, they would have knocked a second one too. Props to Italy for showing great Valor and not giving up till the referee blew the final whistle, but honestly, it should have come home for England.

5) GARETH SOUTHGATE WENT AGAINST THE NORM

English media are highly cynical when the talk about their national team coaches. We have seen a few managers end their career after receiving a lot of hat from the media. We”, Gareth Southgate didn’t let that discourage him from playing England the way he wanted. From selecting the 26 players ahead of the tournament to the final day of Euro 2020. Southgate has found himself in the middle of all kinds of Speculations and controversies.

The fans and media wanted to see more of Jack Grealish and Jadon Sancho on the pitch but Jack Grealish didn’t listen to the public. Even in the final day with all these options on the right-wing, he decided to play Mason Mount in an odd position. If it had been another coach, he would have given in to the audience to make them feel content, but Southgate played his own tune at the helm. You have got to respect the man for that.

Luke Shaw has owned the night today not just because of their opening goal. Luke Shaw offered so much for his side tonight and England would not have pushed the game onto extra time if it wasn’t for their left-back. His performance in the knockout stages has been absolutely breathtaking and has earned him the title of ‘The English Roberto Carlos’.

His contributions in the attacking half cannot be matched as he was constantly on the run tonight. He played some inviting crosses for the English forwards and was also one of the key architects in their build-up play. Although England lost the game, we saw some great stuff by the Manchester United player tonight.