When Gareth Southgate started Raheem Sterling, Phil Foden, Mason Mount ahead of Marcus Rashford, Jadon Sancho, and the crowd favourite Jack Grealish for England in their first game against Croatia in the European Championships, everyone thought it was a tactical setup as he started two defensive midfielders in Declan Rice and Kalvin Phillips, alongside Mount, who is regarded as being more “defensive” than Grealish.

Croatia had defeated England in the World Cup semi-final nearly three years ago and even though most of the English fans were distraught at the line-up, Southgate must have felt vindicated by his decisions after Sterling had scored the only goal of the game in the 1-0 win after missing a host of chances in the prior minutes. 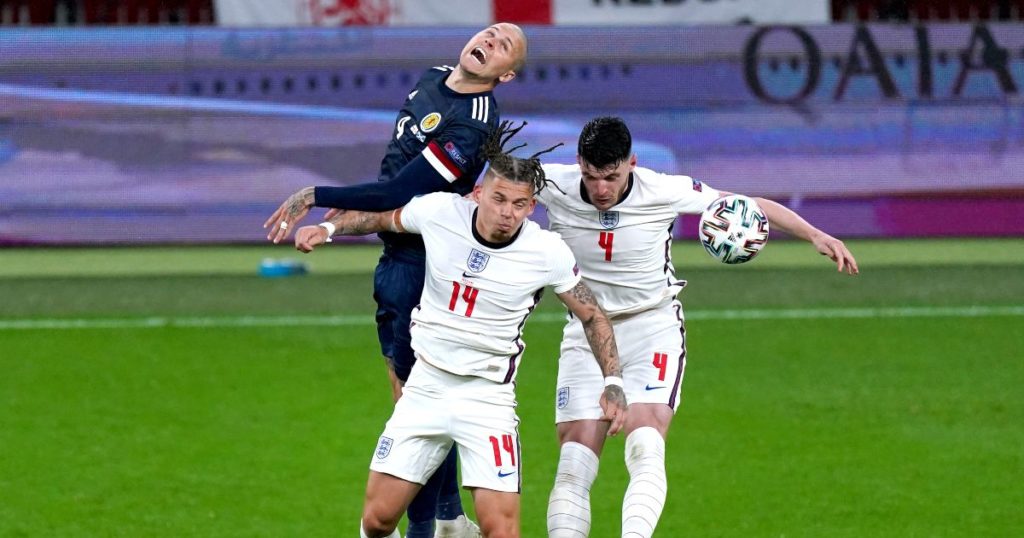 Phillips and Rice, are the two peas in the same pod. (Image Courtesy: UEFA Euro 2020 / Twitter)

But fans and pundits alike were shocked and disappointed when Southgate started the same front four along with the same two defensive midfielders in a derby against Scotland, in which a win would have secured their qualification to the Round of 16, but it was not to be as the match ended up being a boring 0-0 draw.

Everyone knew Scotland would play the defensive game and sit back against the quality that England possess and to breach a defence like that, a team needs players who can provide a bit more creativity in the final third to break the defensive systems of the opposition side and England had two of them on the bench; Jadon Sancho, and a certain Jack Grealish. 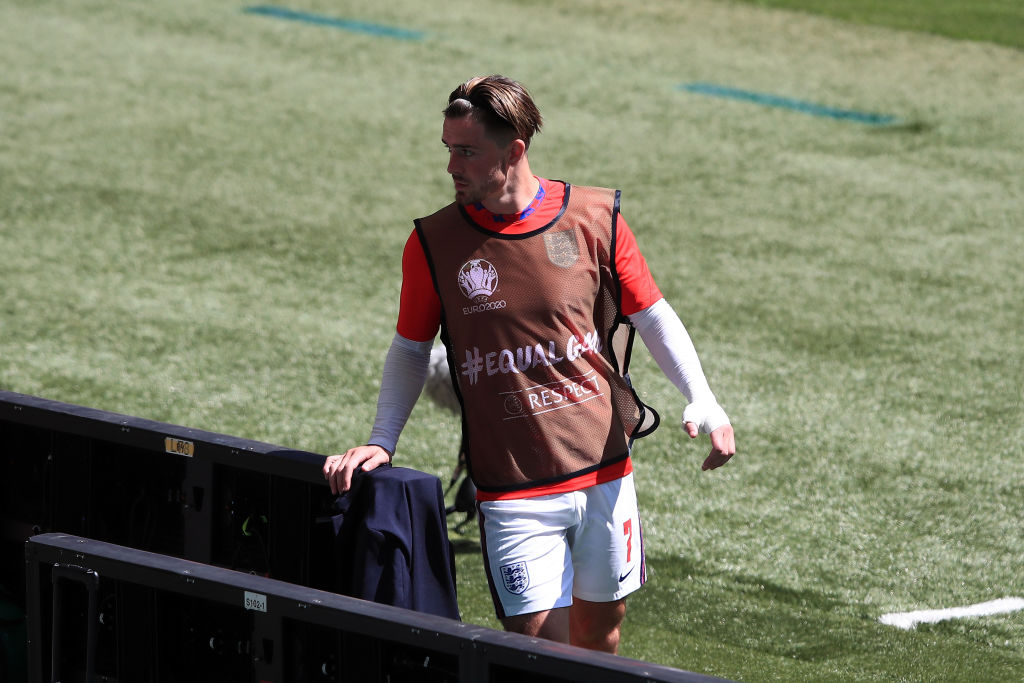 Grealish, on the sidelines in the tournament. (Image Courtesy: Aston Villa / Twitter)

His absence in the team from start has been a mystery for all, that too after his return from injury saw dazzling performances in the fag end of the season for Aston Villa and in the friendlies for England prior to the start of the Euros.

WHY HASN’T GREALISH FEATURED IN THE STARTING LINE-UP?

Leave the starting line-up, Grealish has featured in only one of the two games for England, when he came on as a substitute for Phil Foden in the game against Scotland with less than 30 minutes to the end of the game.

This absence of Grealish in the Southgate-led England squad is not new for the fans and pundits, as he made only seven appearances prior to the Euros, most of them coming as an option from the bench.

An absolute honour to make the squad for the Euros this summer. I’ve always dreamt about playing in a major tournament for my country! Let’s make it a summer to remember 🏴󠁧󠁢󠁥󠁮󠁧󠁿🦁 #ThreeLions pic.twitter.com/rEgOBMdfpi

The idea of the fans is that if a player with the calibre of Grealish is being benched, then the starting line-up of England must be so well talented that it is tough for newer players to break into it. Alas, that’s not the case in the present situation.

In 180 minutes, England managed to muster only one goal. At times there is very well chance creation from the front four, and when there are chances created, most of them tend to miss the goal, resulting in score lines seen in the past week.

For the 27 minutes that Grealish featured against Scotland, it was breath of fresh air for the viewers as the Aston Villa captain showed the magic that he possessed in his feet. In the 85th minute, he took a pass and was followed way back into his own half by Stephen O’Donnell. Grealish turned and twisted and feinted, and eventually drew a knee to the thigh from an exasperated O’Donnell, who was booked as he sprinted back.

🏴󠁧󠁢󠁥󠁮󠁧󠁿Jack Grealish in 27 mins of play against Scotland

It was hard for the fans to take as to why Southgate prefers a defensive line-up even against Scotland because if the same sequence as above were to take place an hour and a half earlier, when the game was still fluid, and England’s attacking patterns not yet congealed into something damp and soggy and unhappy, something might have just happened.

Everyone knows that Southgate is a defensive manager and that his squad’s strengths lie in the attacking areas. And when a manager cannot find a way to fit his strengths into a line-up, it is hard to not ask why something hasn’t happened and why there hasn’t been a change in the mentality?

WILL GREALISH FEATURE IN THE KNOCKOUTS?

The pro-Southgate group, if there is any, can argue that Grealish is being rested for the tougher games that take place in the knockout stages. If England tops Group D, they face the prospect of having their round of 16 fixture against the runner-up of Group F, who could be either France, Germany, or Portugal and all three of them are the toughest one could get in a knockout game. 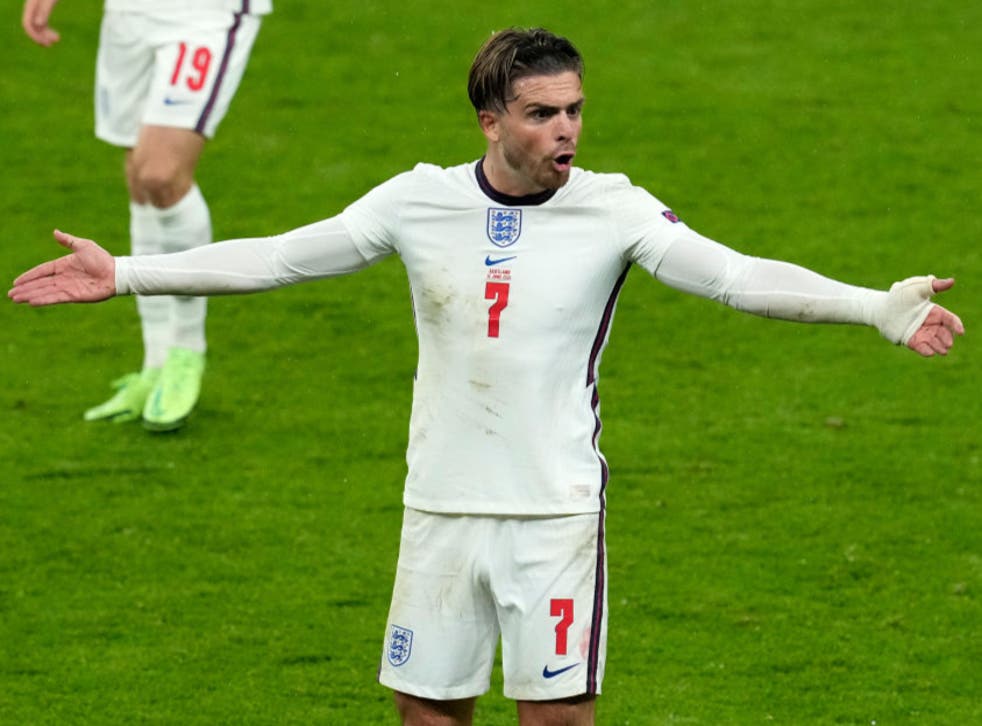 Grealish has to start in the knockouts for England. (Image Courtesy: UEFA Euro 2020 / Twitter)

Yes, Grealish might start for England in the round of 16 against one of the above-mentioned sides, so that he can use his talent and skill to break down the strong defences each of them possess but that will only happen if Southgate sets up a positive line-up, without the two defensive midfielders as it helps the attacking players to play together more to create and score goals.

There might be a trial for Grealish in the final group game against the Czechs. There is and will be a call to regear this team, to redesign the attack around the misfiring Harry Kane. Southgate will surely resist it, and England will progress from here all the same because they are an outrageously talented squad. 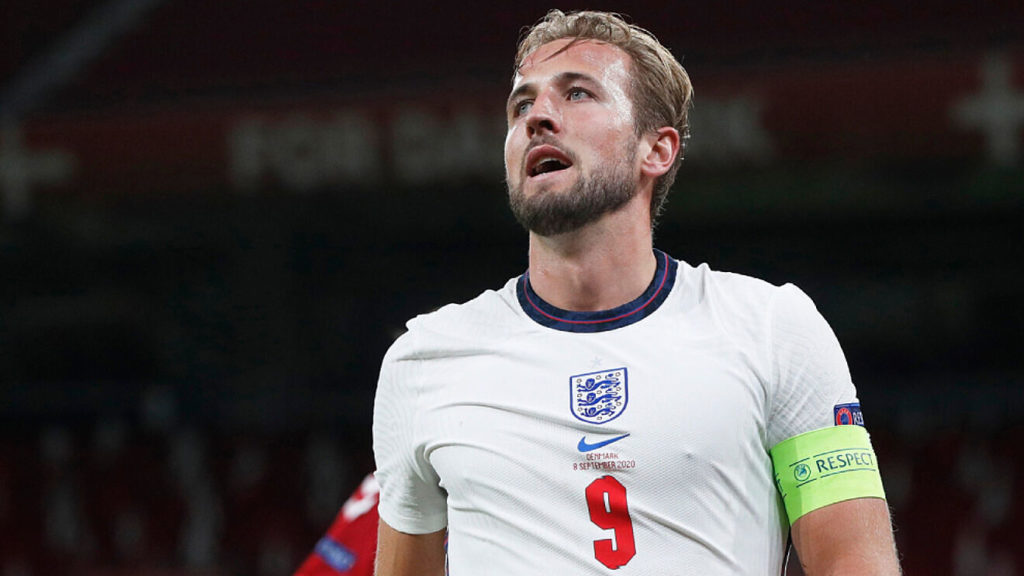 Harry Kane has misfired till now in the tournament. (Image Courtesy: Marca / Website)

But the sense of something being missed, of possibilities, passed up will remain. This England team found their edges, the end of their reach at Wembley. If there is sadness it is in the fact, they seem to have become grey and a little deathly at just the wrong moment.

And if that wrong moment isn’t made right, fans can forget the idea of “It’s coming home”.