Michel Platini’s legacy has been tainted by his unscrupulous activities post retirement. But to any football fan around the world who had the opportunity to see him play the name still evokes joy. Specially to Les Bleus fans who owe their first international trophy to the talismanic midfielder’s astounding ability, form and leadership at the 1984 Euro, that took place in France itself.

At a time when French footballers were often considered technically inept and lacking the flair and elegance that ruled European football, Platini was one of his kind. Occupying the role of a modern-day playmaker, Platini dictated the tempo and pace of the game at will. 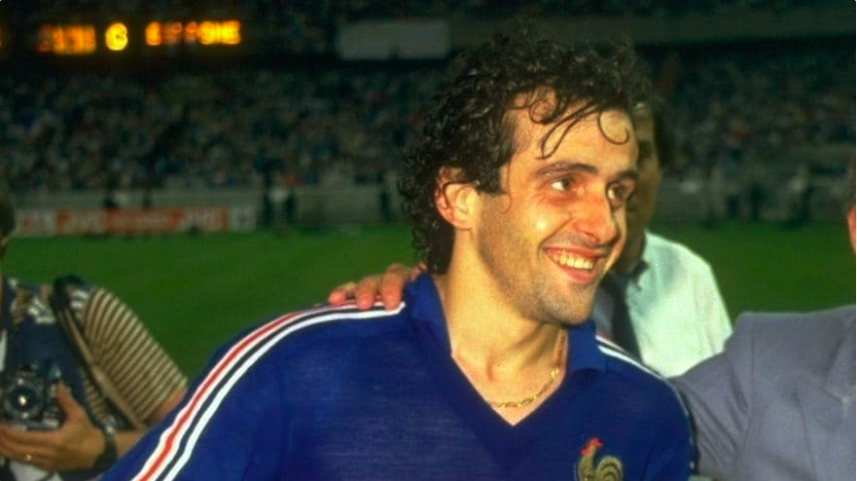 Platini was the greatest footballer of his generation and there is little doubt about it. There was nothing that he couldn’t do with a football. From scoring audacious goals to creating them for his teammates with his immense passing range, Platini was the complete midfielder.

Known for his dead ball-striking ability, Platini was one of the first footballers to take direct free kicks and score a lot of them. His footballing IQ and game reading was such that despite lacking the physical attributes, he could dominate the midfield with his mind. A breathtaking dribbler, Platini could carry the ball so elegantly, it almost made it impossible to tackle him.

He has the third-most number of Ballon d’Or titles after Lionel Messi and Cristiano Ronaldo, and he won them consecutively from 1983 to 1985, such was the dominance of Le Roi in world football. Michel Platini couldn’t have reached the prime of his career at a better time than at the 1984 Euro with him leading the Les Bleus to glory. France had qualified for the tournament as hosts, after failing to qualify on five straight occasions. But this France side wasn’t afraid of challenges with the talent they had at their disposal, and Michel Platini’s unforeseeable heroics made sure they realised the potential.

GLIDING THROUGH THE GROUP STAGE

The stage was set for France to start their campaign on a positive note, they were grouped with an up and coming European force Denmark, previous edition’s runner ups Belgium and an out-of-favour Yugoslavia. The first game was to be played against European Player of the Year Allan Simonsen’s dangerous Danes.

A deadlocked match, scarred with the horrific knee-breaking injury to the Danish forward Simonsen, ended 1-0 in the favour of the home side with Platini securing the win with a deflected goal in the 78th minute, scoring his first of many in the tournament.

In the following group stage fixture, France were to face neighbours Belgium who lost out to West Germany in the 1980 final. They weren’t as good as four years ago and the 5-0 thrashing by France left no doubts about it. Michel Platini in actions against Belgium in the group stage. Image Source – The Guardian / Website

Platini opened the scoring in the 4th minute itself with an excellent left-footed strike from outside the box into the bottom corner, before adding two more, with his right-footed penalty and a graceful header in the second half to complete a “perfect” hattrick and securing their place in the semi-final.

The final group match was against a significantly weaker Yugoslavia and France were looking to make the most out of it to carry the 100% win record onto the knock-out stages. Surprisingly, the group leaders were trailing after the first 45 thanks to a Milos Sestic screamer into the top corner. It was Yugoslavia’s first goal of the tournament that gave them the lead at St. Etienne.

The second half saw a masterful performance from the French captain, Michel Platini who scored his second hattrick of the Euro 1984, a consecutive “perfect” hattrick. After slotting in the ball with his weak foot in a 1v1, Platini scored a scorching header just three minutes later. His final goal was a classic free-kick from the edge of the box that flew above the wall and across the keeper into the top left corner. SEVEN goals in the group stages! Michel Platini had rocked the 1984 Euro, but there was still a long way to go. The second group’s runner ups Portugal awaited the hosts for the semi-finals.

A FIVE-GOAL THRILLER IN THE SEMIS

The City of Marseille was prepared to host the semi-final between France and Portugal. A whopping 55,000 attended what turned out to be one of the most iconic semi-finals in the history of the competition.

The match began with France dominating the possession but their best chance came in the 24th minute when they won a free-kick near Portugal penalty area, this time, left-back Jean-Francois Domergue found the back of the net with an astounding finish from the set-piece. The match continued in the same way as Les Bleus created chance after chance but were denied by either luck or Selecao’s captain and number one Manuel Bento. It was a goalkeeping performance of the highest order that kept France from doubling its lead.

In the later stages of the second half, with 16 minutes to go, Portugal equalised with a stadium-silencing header from Rui Jordao. The full-time whistle blew with the scores level and the match went into extra time, where Jordao struck once again with a bouncing volley across the goal in the 98th minute.

France kept attacking with some brilliant through balls from Platini but to no avail as Bento stood like a wall between the posts. France finally broke the deadlock as Domergue scored once again following a mix-up in the Selecao box. Six minutes remaining with the scores tied at two each. The game needed a moment of magic to prevent it from going to penalties and who else to provide but Michel Platini, as commentator John Moston, screamed in the 119th minute. The King of France saw defenders tumbling at his feet in the six-yard box before slotting the ball in the back of the net and driving France into their first-ever international final at the 1984 Euro.

THE FINAL IN PARC DES PRINCES

The other semi-final went into the extra-time as well, but couldn’t find a conclusive goal and hence was decided on penalties. Spain scored all five of theirs and an early miss from Denmark’s Preben Elkjaer meant it was going to be La Roja vs Les Bleus in the final at the Parc Des Princes Stadium, Paris. 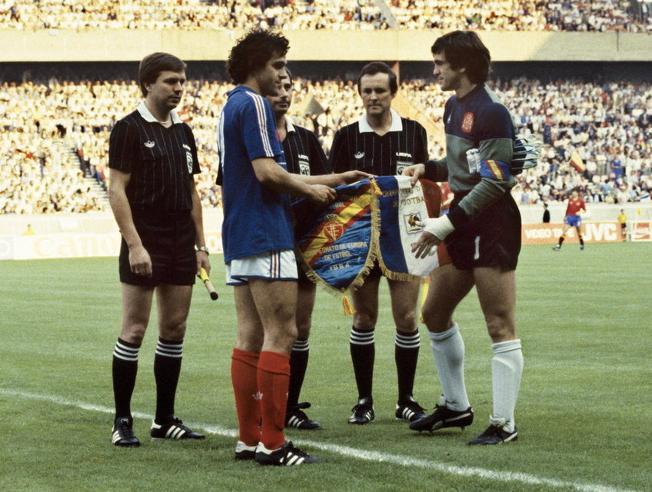 The French capital was all prepared for the final night as the team marched through the tournament with their hero in the number 10 jersey leading the path. In the final, it was him again! 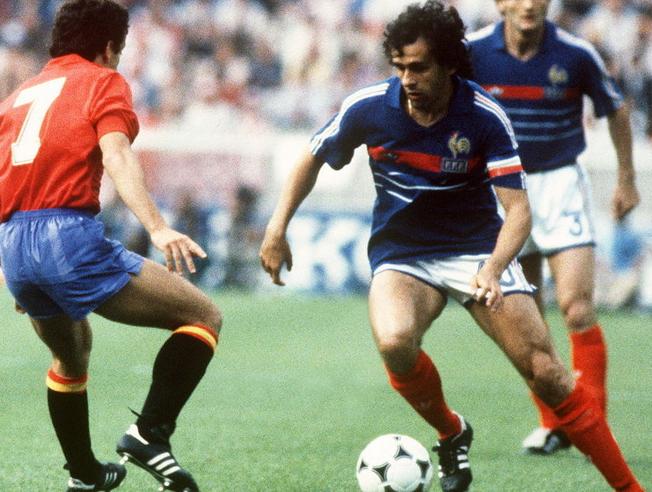 After a dull first half that saw no clear-cut chances for either side except for a hefty goal-line clearance by Patrick Battiston which made sure the half ended at an even scoreline, the game picked up its pace.

France was still looking the more likely to score with Platini commanding the game with his extraordinary ball control and passing expertise. And in the 57th minute, an edge-of-the-box free-kick with Platini standing over the ball turned lethal for the hosts. The then 29-year old struck the ball towards the keeper’s near post which caught Luis Arconada off-guard. The Spanish captain and goalkeeper who displayed a brilliant performance all tournament had already committed to the other side tried his best to regain balance and catch the low-lying shot but rather helped it on towards the goal and put France in a position of advantage.

Spain looked demoralised and crumbled after Platini’s goal and failed to come back in the game despite all the hard work.

The game remained 1-0 in the home side’s favour and with just five minutes to go, French centre-half Yvon Le Roux received his second yellow of the night for a late-sliding challenge. 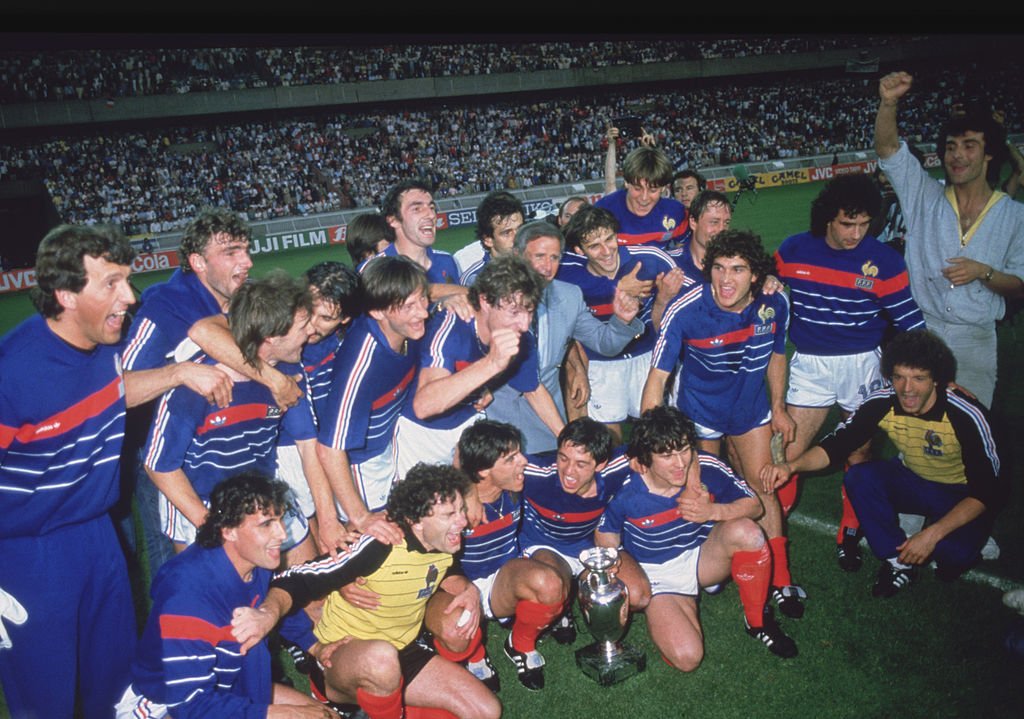 This was Spain’s best chance to come back with an extra man. Spain couldn’t use the number advantage and instead, it was French forward Bruce Ballone who sealed the fate of the match with a last-minute goal.

Michel Platini amassed a total of NINE goals in the 1984 Euro, nine out of France’s total 14, including two perfect hattricks. It was undoubtedly the best ever individual performance in the Euros history back then, but 37 years down the lane Platini still holds the record for most goals in the tournament, despite playing in just one edition. He also holds the all-time record for most hat tricks in the tournament, also, the fastest hattrick in Euros history was the one he scored against Yugoslavia in 18 minutes.

Michel Platini’s goalscoring record might get surpassed by Cristiano Ronaldo at the Euro 2020 with the Portuguese superstar also having 9 goals in the competition, although the latter played 16 more games than the French icon.