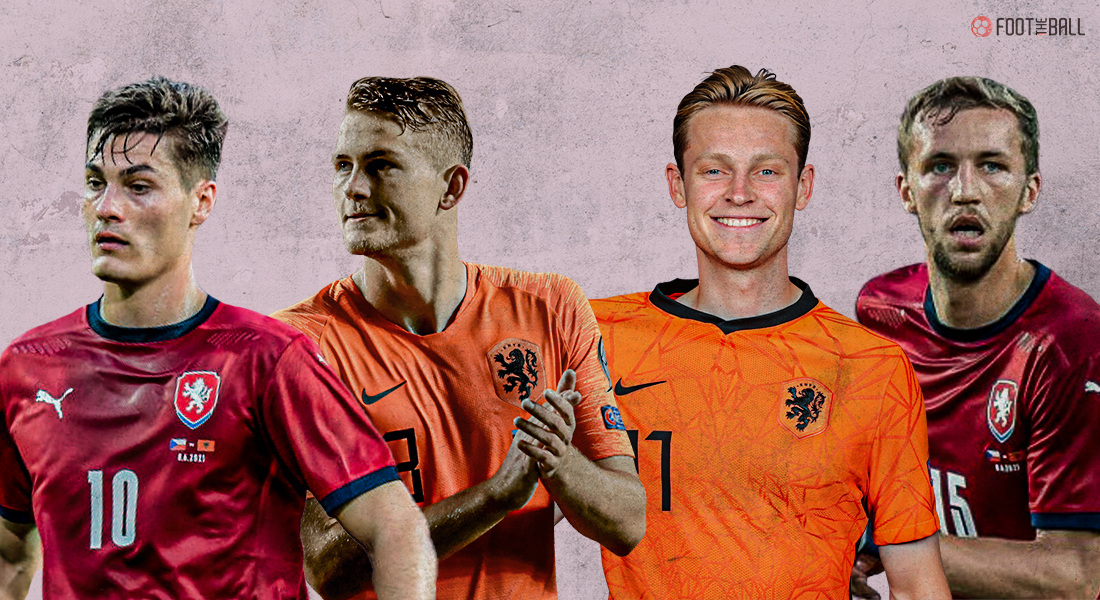 The fixtures for the Euro 2020 round of 16 have been finalised, and we have some fascinating matches ahead that will break some hearts but create unforgettable memories. One of these matchups, between the Netherlands and the Czech Republic, is sure to be an exciting one.

The Netherlands achieved a clean sweep in Group C, completely dominating their group counterparts while scoring 8 goals in the process. To be completely honest, this was quite expected from the Dutch, considering the firepower they have in their squad compared to the other three teams. After a stellar showing in the group stages, they must be brimming with confidence and will be aiming to win it all.

While Czech Republic finished third in Group D, they had their fair share of inspirational performances in all of the matches they played. Their lone defeat came at the hands of England on the final matchday of the group stages.

They lost 1-0, but the result doesn’t tell the whole story because the Czechs fought hard and dominated the game in numerous areas. Although, their toughest test will come in the round of 16 when they tackle a talented Dutch squad.

The match will take place in Budapest on Sunday, June 27 with kick-off at 18:00 CET. pic.twitter.com/oVN6kkx87w

FootTheBall has identified three key matchups that might be crucial in deciding this tie.

Frenkie De Jong had developed into a total player with multiple layers and facets in his skillsets. The 24-year-old has been the master at controlling games from the midfield for the Netherlands. He understands the tempo that is required at any given time, as well as knows where to position himself and when to pass with one or two touches rather than dribbling by default.

De Jong has shown glimpses of grabbing matches by the scruff of the neck and absolutely dominating them thanks to his Birdseye vision, exceptional positional awareness, and limitless endurance.

Tomas Soucek on the other hand calms everything down and adds that ‘pausa’ to Czech Republic’s ball movement. The holding midfielder is a master of dictating the tempo and choosing the touches and direction of passes while maintaining adequate distances with teammates. He acts as a super glue, making the entire team move as a block and stick together. Soucek adds continuity, compactness, and clarity to his side’s ball circulation.

Although belonging to completely different genotypes of football players, both will have quite similar roles in orchestrating the rhythm of the game and generating passing lanes. Although Soucek will also be required to operate as a shield in front of the Czech Republic’s defensive line in order to prevent or slow down the fatal Dutch attacks.

Patrick Schick has been the Czech Republic’s saviour, as the 25-year-old striker has scored all three of the Czech Republic’s goals in the tournament. And boy-o-boy, he had every football fan’s jaw dropped with his exceptional strike against Scotland in their first encounter which will need a miracle to beat as the goal of the tournament. Schick has been lethal on counter-attacks, constantly providing a threat to opposing defences.

But the attacker will have his work cut out for him when he will need to break past the Dutch defensive wall, which is being marshalled by Matthijs de Ligt.

Matthijs de Ligt is a force to be reckoned with for opposing attackers and is the epitome of leadership. Tall, muscular and athletic, intelligent, comfortable on the ball, and a born leader considering the fact that he captained Ajax at the age of 19. He has the physique and size of a centre-back, as well as an extremely technical and exceptional reading of the game as he is a master of defending in 1v1 scenarios. He has mastered all of the tactical, technical, and mental aspects of the game, making him one of the best in his position.

He’ll be attempting to keep the Czech Republic’s offence headed by Schick in his pockets, while Schick will be looking to capitalise on every opportunity he gets, as he has in the past matches.

Memphis exudes confidence, that knack for attempting and inventing things in a limited amount of time and space. He possesses pausa and acceleration, and with a single touch, he can speed up a slow game. His ability to react and perform quickly, as well as improvise, is exceptional.

Those quick but effective interventions at the edge of the box might be his most distinguishing trait. He is adept at holding up play and laying it off for teammates that are facing play. Depay is not a natural goal scorer but can score in plenty and is capable of shots with power and precision from any range, of any type.

Depay and Czech Republic’s fullback, Vladimir Coufal are likely to come face to face more often than not. Coufal is an aggressive defender who won’t back down from a strong tackle when given the chance. He is not like modern-day wingbacks, who must continually surge forward into the final third. Coufal has a more defensive approach, preferring to pass the ball out to the forwards or the midfielders more frequently.

Despite this, he is a potent weapon when it comes to crossing the ball into the opposing penalty box. One quality of the right-back that is underappreciated is his drive and mindset. Coufal never seems to acknowledge defeat or even surrender to an opponent on the field. And he will be expected to do just that against the Netherlands, using every weapon in his armory to stop Depay.