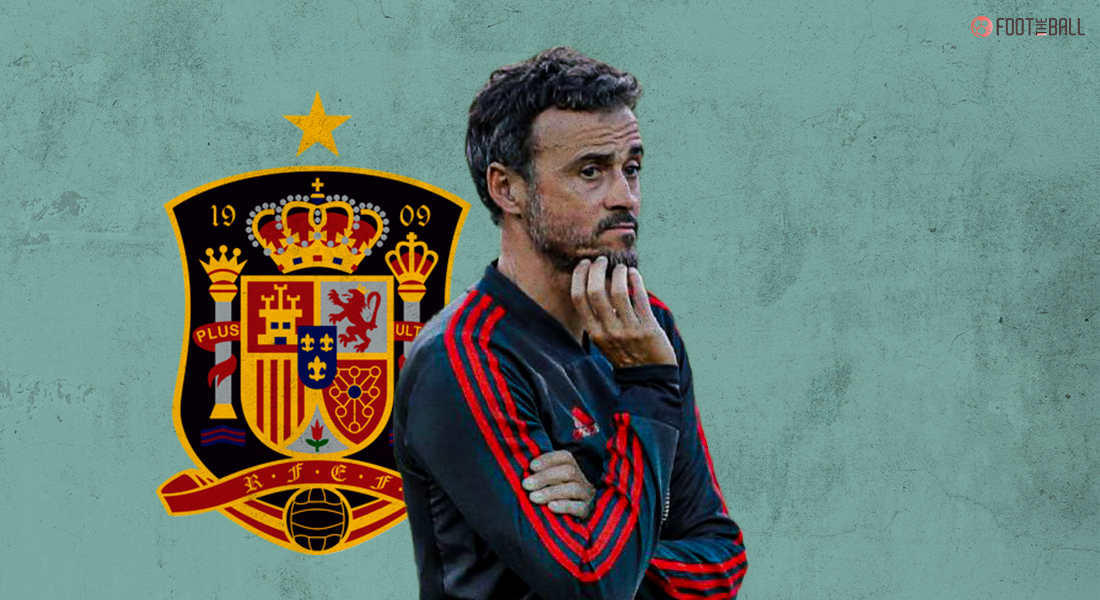 Spain and Italy are set to collide in the Euro 2020 semifinals. La Roja has their hands full as they will play an Italian team that has been tearing it up recently, with a 32-game undefeated streak.

Implementing a positional play so efficiently is a rare sight at the national team level, but the Azzurri have excelled at that. Another cliché, that Serie A is boring, has been debunked by Roberto Mancini’s Italy, as it is one of the most entertaining and tactically rich leagues in the world.

On Wednesday, Spain will encounter their toughest test of the tournament and will need to up their game if they are to stand a chance against this ruthless Italian squad.

Spain has advanced to the European Championship semifinals as the tournament’s highest-scoring side, although these numbers are quite misleading. The most major concern in Spain’s pursuit for a third continental crown in the previous four editions is its inadequacies at the offensive end.

For example in the quarter-finals, the Spaniards had 28 shots in that game that stretched to extra time and penalties and saw Switzerland fight approximately 45 minutes with a man down. By the end, it seemed like shooting practice drills against Swiss shot-stopper, Yann Sommer, who didn’t let anything past him.

🧤 Saved a penalty in the shootout.

💔 You have to feel sorry for Yann Sommer after that performance.#EURO2020 #SUI #ESP pic.twitter.com/8p3FriMbna

Nonetheless, Luis Enrique’s men ended the 120-minute match relying on an own-goal in a 1-1 stalemate, and even squandered two spot-kicks in the penalty shootout that they won 3-1.

First-choice striker Alvaro Morata has Luis Enrique’s full support, but he appears to be lacking confidence; not for the first time in his career.

All Tika with no Taka. #EURO2020 #ESP pic.twitter.com/5NCkBt5FXT

Gerard Moreno is Spain’s other striker, and he came in for a weary Morata after only 54 minutes against Switzerland. The Villarreal striker, who scored 23 goals in La Liga last season, had at least four clear chances to score, one from within the six-yard box, but he botched each and every one.

Spain advanced to the semifinals in an unusual manner, drawing its first two games — scoring only one of its 29 shots on goal against Sweden and Poland — before eventually finding a cutting edge in a 5-0 triumph over Slovakia in the must-win encounter.

Then came the dramatic 5-3 round-of-16 triumph over Croatia, which seemed to be a watershed moment for Spain’s offense. The Switzerland game, on the other hand, demonstrated differently.

TAKING FOOT OFF THE PEDDLE

Against Switzerland, in the first half, Spain pressed and played mostly around the midline and showed conviction in passing. The movements were visible, so was the pattern. And also the own goal, which put them in the lead. But what about that major problem they have, the signs of which were visible in the match against Croatia as well after they took the lead?

GAME. OF. THE. TOURNAMENT.

La Roja simply took their hands off the gear and chose to react to the balls. When they should/could have stepped up to extend the lead, they invited the Swiss to suffocate them in their half, allowing them to equalise. From 45′ to 75′,  Spain hardly had any fluid movement, passing and attacks as the Swiss backline parked themselves just behind the midline.

Without their captain G. Xhaka
Without R. Freuler after the 77’ min.
Without X. Shaqiri after the 81’ min.

What a run by the Swiss at the Euros’s

Spain’s defensive structure has been good, but the gaps that have opened up as a result of them releasing the foot off the gas are concerning and have been exploited. Spain needs to control the party, even after opening the champagne.⁣

They worked really hard to reach the semi-finals, but their victories have been earned on their opponent’s weaknesses, which included possession and pace. A similar strategy would not work or succeed against an offensive and defensive juggernaut like Italy.

WHAT WILL SPAIN NEED TO DO?

In Italy, Spain will encounter a team that has arguably the best midfield in Europe, is fearsome in attack and is solid as rock in defence. When it comes to defence, it is safe to assume that Spain’s attackers will have their hands full against Chiellini and Bonucci, given their failure to convert clear-cut chances throughout the tournament. And with Roberto Mancini’s men sending the number one ranked team in Belgium packing, it’s fair to say that his players are at the pinnacle of their powers. 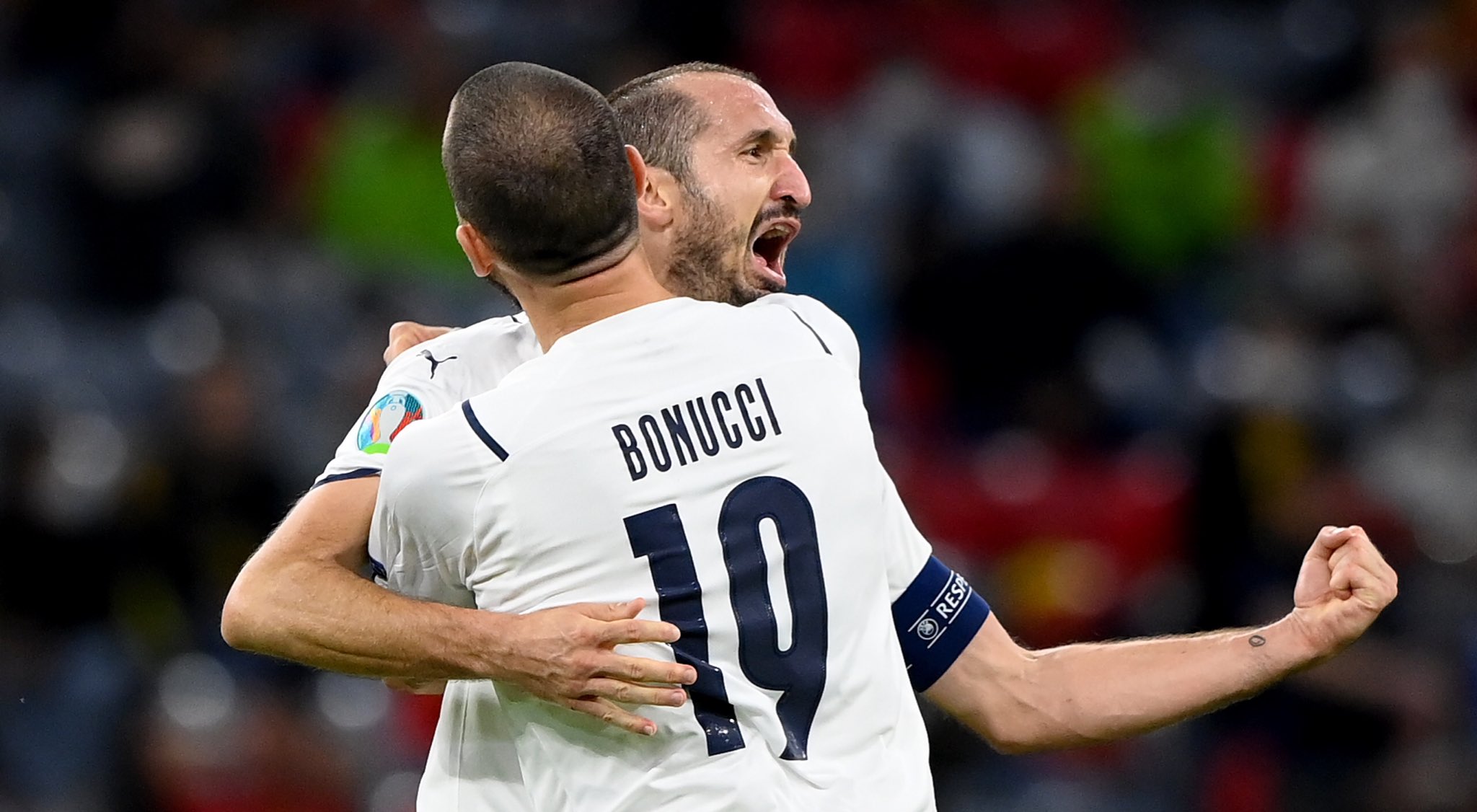 Spain attackers will have their work cut out for them against Chiellini and Bonucci (Courtesy: The Guardian/ Website)

Luis Enrique would be pleased to know that his team has had six different goalscorers at Euro 2020. With a tournament-high possession rate of 67.2 percent and the highest passing accuracy of all nations at 89.4 percent, the midfield is functioning well.
La Roja has had 365 attacks in the tournament, 69 more than second-place Italy, per the UEFA data. There are just three teams with more than 200 attacks.

That’s fine if there are consistent strikers around them to finish those attacks. However, that has not been the case lately, as Spain prepares to face a defensive powerhouse in Italy in the semifinals.

Strikers will have to take advantage of and capitalise on any goal-scoring opportunities that present themselves. They will also have to defend with vigour, since any clear offensive opportunities offered to the Italians would spell catastrophe for Luis Enrique and his squad.