Sweden and Ukraine met in the last match of the Round of 16 in what was billed as the battle of the underdogs. The match between the two sides was anything but that in Glasgow.

Spectators witnessed breathtaking, end-to-end action in Scotland as the Swedes and Ukrainians vied for a place in the quarter-final with England. The match ended 1-1 after the end of regulation time.

In extra time, Sweden went a player down as Danielson received his marching orders after a reckless and clumsy challenge.

Ukraine came back in the match at the very end as Artem Dobvyk scored in added time of the second half of extra time to send the Ukrainians to the quarter-final with England.

FootTheBall takes a look at the Round of 16 match between Sweden and Ukraine as the latter qualified for the quarter-finals for the first time in their footballing history.

The last time that Sweden and Ukraine met in the Euros was nine years ago where current Ukraine manager Andriy Shevchenko scored a late brace to win it for the Ukrainians on home soil.

And they picked up where they had left off as Shevchenko’s charges dominated and controlled the opening exchanges of the match in Hampden Park in Glasgow. Their playmaker Shaparenko missed a shot in the 10th minute to give them the lead, but they still piled on the pressure.

Eventually they were rewarded for their efforts as Manchester City’s Oleksandr Zinchenko rifled in a shot from Yarmolenko’s cross just as the clock was approaching the half-hour mark in Scotland.

And just five minutes later Andriy Yarmolenko had the chance to extend their lead but missed from inside the box as finally the match became alive in the city that is renowned for whisky.

SWEDEN HAVE THE LAST LAUGH IN FIRST HALF

As the match progressed after Zinchenko’s goal, Sweden began to grow and exert their influence with the clock ticking by.

The Swedes recorded more shots than the Ukrainians in the first half as the trio of Kulusevski, Isak and Forsberg combined with each other.

But for all their work on the pitch, they didn’t have anything to give a good account of themselves until the very end of the first half in Hampden Park.

In the 41st minute Kulusevski had a claim for a penalty waved away by the referee as the Swedes stared at the prospect of walking down the players’ tunnel at half-time 0-1 down.

But two minutes later the Swedes were back on level terms as Emil Forsberg scored his 4th goal in Euro 2020 via a deflection off Zabarnyi that wrong footed Bushchan to restore parity in the Round of 16 match.

In the process, the RB Leipzig winger became the first Swede to score four goals in a single European Championship finals tournament, but more importantly Sweden had gained an equal footing in the match once again with Ukraine.

A TALE OF TWO POSTS FOR SWEDEN AND UKRAINE

Andriy Yarmolenko almost earned another assist as he passed the ball to an approaching Sydorchuk who could only find the post as Olsen was completely beaten on the shot.

And it didn’t stop there as the free flowing football spectacle continued in Glasgow. Just one minute later it was the Swedish players who were building up an attack that ended up with Forsberg curing in a beautiful effort that glanced off the post as the spectators were left on the edge of their seats.

The Swedes continued to knock on the door and in the 69th minute once again Emil Forsberg was in the thick of things. He started a run down the left flank, skipping past a couple of defenders before releasing a shot aimed for the top right corner.

🤔 Did you think that was going in?

🇸🇪 Magnificent from Forsberg but his shot hits the crossbar! #EURO2020 pic.twitter.com/Req9hB6MZj

But the ball didn’t bend low enough and instead struck the crossbar as another chance went begging in the match in Glasgow’s Hampden Park. With no side scoring in the second half, the match went into extra time

In the first period of extra time, Ukraine were given a huge boost by the referee as Marcus Danielson of Sweden saw red for his reckless challenge on Ukraine’s Besedin.

The referee had earlier given a yellow card to the Swedish player before brandishing the red card out of his front pocket after a VAR consultation with the help of the pitch-side monitor.

DOVBYK SECURES PLACE IN QUARTER-FINALS FOR UKRAINE; SWEDEN LEFT TO LICK THEIR WOUNDS

There were a lot of stoppages in play as both sides looked wearied from all the huffing and puffing in regulation time. A lot of players went down on the pitch as medics took centre stage in Glasgow.

But the Ukrainians kept pushing and finally found a way through after Artem Dovbyk scored his first ever goal for Ukraine in the concluding minutes of the second half of extra time to send the Ukrainian fans into delirium.

🇺🇦 What a moment for Ukraine as Dovbyk wins it in extra time ⚽️#EURO2020 pic.twitter.com/J7tAv8Mbc9

The Swedes were left with no wind in their sails after Dobvyk delivered the sucker punch right at the end of the match as Shevchenko’s charges booked their place in the quarter-final with England, their first ever quarter-final appearance at the Euros. 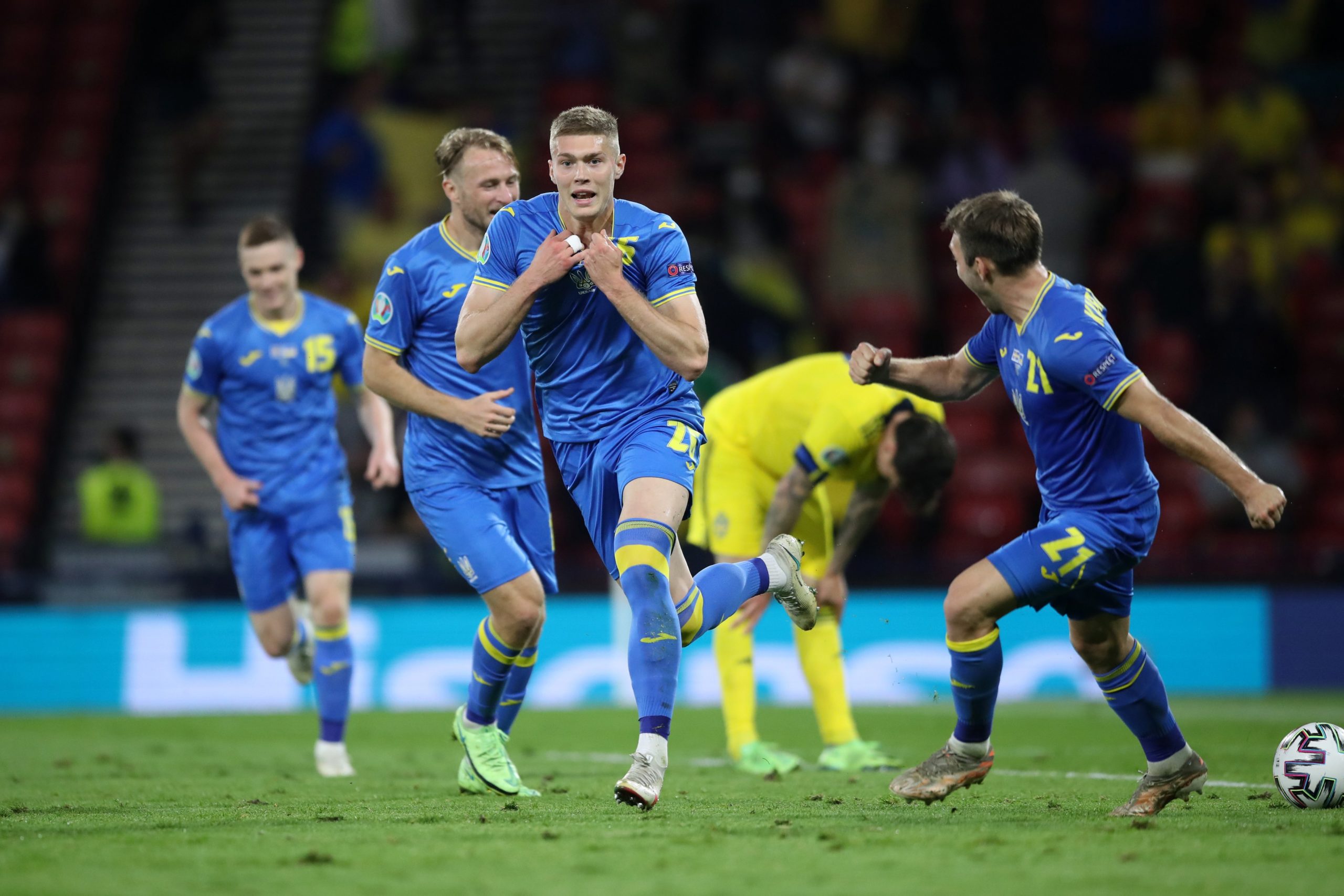 Sweden put up a commendable performance with Emil Forsberg playing scintillating football, but it wasn’t to be for them as Ukraine qualified with a last-gasp goal from Artem Dobvyk