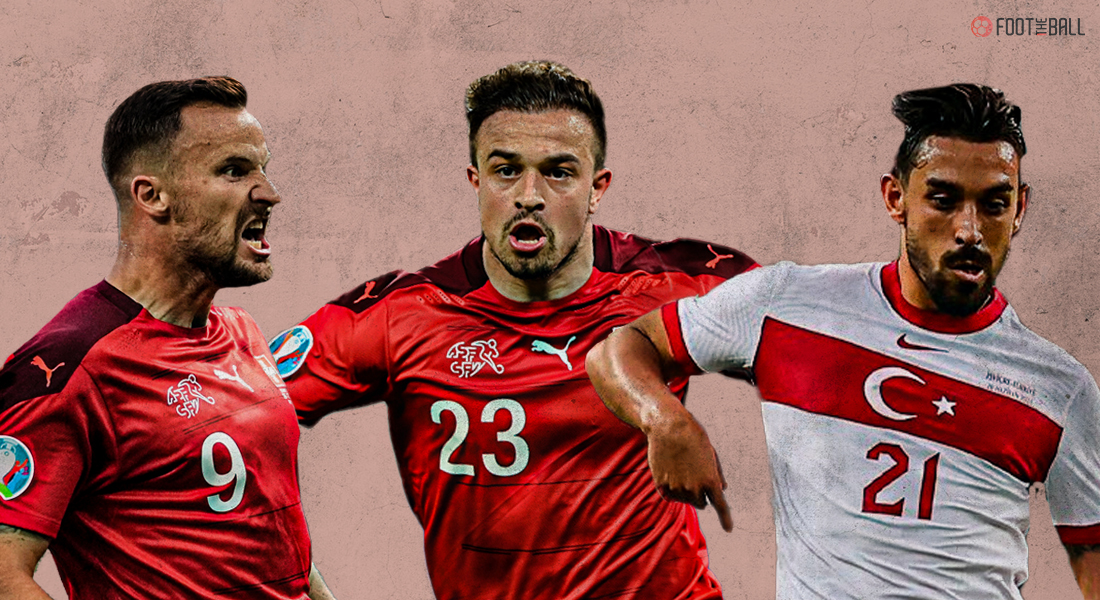 Switzerland made light work of Turkey as they breezed past them 3-1. A brace from Xherdan Shaqiri and a goal from Haris Seferovic were enough to give them three points against a terrible Turkey side.

The Swiss are in a  position to progress to the knockouts as lucky losers now. They have to bank on favours from other sides. Meanwhile, the Turks who have entered the tournament as dark horses exit it cheaply without a point to their name.

🇨🇭 Shaqiri nets twice in Switzerland win; Seferović opened the scoring early on
🇹🇷 Turkey score their first goal of the tournament but not enough as they finish bottom of Group A

Olympic Stadium at Baku played the host to an all-important game. A win in this game could’ve given both sides some hope of progression into the knockouts. Both sides came into the game without a win and desperately needed a win today. Fireworks were expected at Baku and we did get them in the game.

Switzerland made two changes to the side beaten comprehensively by Italy. Widmer and Stephen Zuber came into the game and clearly, the Zuber gamble paid off. Turkey too had two changes but those changes failed to inspire them.

Turkey made a positive start to the game with some chances early on. Ayhan and Yilmaz tested Yann Sommer with their strikes. However, it was the Swiss who struck first with their first attack of the game. Stephen Zuber played a one-two with Haris Seferovic. The Swiss striker was cramped for space and just hit it to into the net to give them the lead.

Zuber had a feast in the game as he assisted two more times. He found Xherdan Shaqiri twice as the Liverpool winger successfully converted both chances. One was a peach of a finish from outside the box and the other was a thunderbolt at the end of a counter.

While Shaqiri’s first goal doubled their lead, his third finished the game after some Turkish resistance. Zuber is in elite company with Michael Laudrup for dishing three assists in a single game.

Turkey had a disappointing but showed little fight before going down. They scored their only goal of the tournament through Irfan Kahveci. His goal halved the deficit temporarily at the start of the second half. Shaqiri scored minutes later to seal the game.

This entertaining game is a part of unique Euro history. Just for the second time in the history of the tournament, three goals were scored from outside the box. The first such instance was in 2016 in the game between Portugal and Hungary. Compact defending from both sides early on meant the shots were fired from outside. All three goals were eye-pleasing.

The first one was from Switzerland’s first attack of the game. Haris Seferovic was covered by defenders on all sides after receiving a pass from Zuber outside the box. The striker was being harried on by defenders and had to do something. He saw a window and shot it through the legs of Demiral and it sneaked past Ugurcan Cakir.

Shaqiri who is well known for his long-range shooting scored the second such goal of the night. He received the ball from Zuber but took it to his weaker right side. He had to let it fly quickly as he was being closed down. The playmaker wrapped his foot around the ball and sent a delicious curling effort into the top right past a flying Cakir.

Turkey were dead and buried at 2-0. They weren’t allowed inside the Swiss box and resorted to shooting from outside the box. Imran Kahveci produced a goal out of nothing. Having received the ball for Calhanoglu he rolled it onto his left foot and powered it into the top-left corner of the net.

Shaqiri then went onto score a goal from inside the box to seal the game at 3-1. Zuber broke down the left and whipped in a grounded cross for Shaqiri to blast it past Cakir with his left foot.

This was a perfect game for a neutral fan. After a six-goal affair yesterday between Germany and Portugal we had another four-goal one today. Turkey failed to score a single goal at the tournament and needed to break their duck today. Switzerland for their good performances had only one goal and wanted the pressure off their backs.

☝️ One word to describe his performance vs Turkey… #EURO2020 pic.twitter.com/l0jPwxMwy5

The game was an even contest in the first half before it turned into a training match in the second half. Turkey kept testing Sommer in Switzerland’s goal every now and then. The Gladbach keeper had to be in top form to deny Mulder and Yilmaz. Similarly even Switzerland were firing left right and centre.

Their star-men Xherdan Shaqiri and Haris Seferovic found their scoring touch with some clinical goals. If not for Cakir’s saves the scoreline could’ve been bigger.

Switzerland have finished their group stage matches with 4 points. They sit third currently behind Wales on goal difference. They would be ruing their missed chances as they are made to wait for the knockout spot. Four points are generally enough to take them through as lucky losers. However, they must have ice in their veins till they get the confirmation.

FAILURE IS AN UNDERSTATEMENT

Turkey could be branded as the biggest failure of the tournament. Even that might feel like an understatement. They were in imperial form in the qualifiers and only let in three goals. Their attack was clicking and they were expected to fire. Many felt that they would be the dark horses of the tournament.

What transpired at the tournament shocked everyone. The Turkish side was heavily reliant on their star striker Burak Yilmaz. The Lille strike in great form after winning the league failed to translate it into the Euros. Though he was creating and receiving chances he was unable to bury them. Precious little was on offer apart from Yilmaz in the attack. Calhanoglu who pulled strings in Serie-A with Milan was anonymous here and others were just getting minutes under their belt.

He’s right, and the lesson to take here is that Ozan Kabak should always be starting ahead of Merih https://t.co/zIJ4UyvpYP

Their defence has let in eight goals at the tournament. It is nearly thrice as many as they have in the qualifiers in a third of the games. The players were just blown away by the quality of the opposition by times. It was seen in the game against Italy but against Wales and against the Swiss it was plain bad defending. They failed to mark their opponents and their recovery runs were lazy. Big-game experience and commitment were clearly missing.

Senol Gunes their head coach could share part of the blame too. His tactics were negated easily by their opponents. His decision to not start Ozan Kabak who had an impressive loan spell with Liverpool should be criticized. All in all a disastrous tournament ends for Turkey with no positives except the goal scored today.